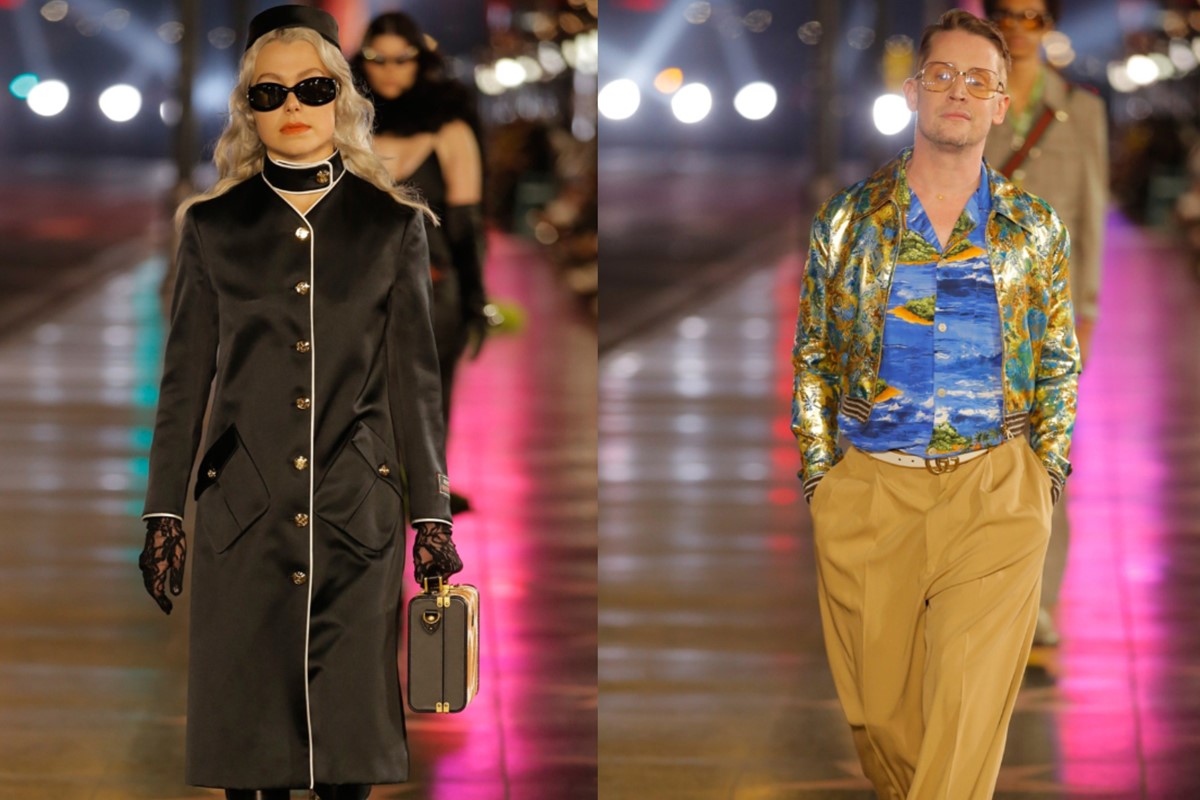 From sex toy accessories to celebrity models, here’s everything you need to know about the Italian house’s Love Parade extravaganza

Fashion season may have officially ended this time last month, but Gucci continues to do it on its own terms. Having had to stick a pin in its plans to show in San Francisco in early 2020 (no prizes for guessing why), Alessandro and co. finally made it Stateside last night – landing in Los Angeles to present their latest resort collection. Invite lost in the post and little desire to stay up ‘till 4am to watch it play out on IG Live? Don’t panic – we’re here with your fashion CliffsNotes.

…but, like, if you’re going to fly all the way to LA to put on a runway show, you’re not going to show on some random street, are you? With the city’s notoriously chaotic traffic diverted elsewhere, Gucci took over its most famous, star-lined boulevard – right in front of the legendary Chinese Theatre – to showcase its new collection. So far, so extra.

THE FROW WAS (UNSURPRISINGLY) MAJOR

Diane Keaton – aka Ms. Annie Hall herself – took a full Balenciaga x Gucci look from the labels’ Aria hackathon for a spin, while Gwyneth Paltrow slipped into a 2021 take on her iconic crimson velvet Gucci suit, originally designed by Tom Ford in 1996. Billie Eilish went for a brown lace pussybow blouse and trousers set, complete with 20s-style beaded headpiece, and new FROW addition Paul Mescal showed up in a powder blue suit and box-fresh sneakers. Also cosying up on the sidelines were longtime Gucci devotee Dakota Johnson, 00s boho queen Sienna Miller, and um… James Corden. Can’t have everything we guess.

…BUT NOT QUITE AS MAJOR AS THE ACTUAL RUNWAY

Alessandro Michele isn’t really one for slapping celebs on the catwalk, so it came as a bit of a surprise to see a bunch of A-Listers walking the Love Parade show. Jared Leto, who’s usually on the sidelines clapping with glee at Gucci shows, took a turn on the runway in a dark grey, double-breasted suit jacket, white leather lace-up trousers, and aviator glasses, alongside Steve Lacy, and curveball Macaulay Culkin, in a Hawaiian shirt, louche beige slacks, and chunky black clogs. Also joining Michele’s all-star line-up was iconic Dazed covergirl Phoebe Bridgers, who switched her signature skeleton look for something that was admittedly still q goth, and activist and Dazed 100er Quannah Chasinghorse, who slipped into an oh-so Old Hollywood floor-length peachy gown. Our fave, however, would have to be Gucci girl Jodie Turner-Smith, who strutted down the boulevard in an enormous Muppet-like coat, saucer sunnies, and PVC gloves – like seriously, who wants to buy a kidney at this point?

From Western cowboys and Old Hollywood divas, Michele mined the gamut of classic movie references, proffering sweeping, fur-trimmed gowns, blush, boudoir-worthy negligees, satin mermaid tail dresses, and hefty marabou feather boas. Looks which will no doubt inspire a flurry of “I need this outfit for when the police come and tell me my rich husband died in mysterious circumstances” memes. There were references to what Michele described as the mythological appeal of movie stars, in gold lurex goddess gowns and Grecian, serpent motifs. As for the menswear, tuxedos were styled with running trainers and sports leggings, an on-the-nose clashing of red carpet and paparazzi voyeurism, while garish hawaiian prints, 10-gallon cowboy hats, and Austin Powers’ ruffled shirting conjured all the leading men of yore.

During a post-show press briefing, Michele told journalists that before fashion, he wanted to be a costume designer. And it would seem that this season, that was not so much an itch to scratch, but more of a pleasure principle. Behind all the lacey, diaphanous fabrics of Hollywood’s glam rooms, Michele sent out latex bralettes and leather-look nipple coverings, forging Rita Hayworth gloves in corset-style lace ups. Models were sent out wielding anal bead chains from between their fists, fastening burly buttplugs onto necklaces, while looks were left half-done, exposing lingerie. It’s not the first time Alessandro has gone to the dark side with his accessories, be that equestrian harnesses or severed heads.

IT WAS AN ODE TO ALESSANDRO’S MOTHER

With The House of Gucci out later this month, the 30-years-in-the-making Ridley Scott flick which dives into the house’s troubled past, it’s only fitting that the label’s centenary show should be an ode to movieland. But it was also a way for Michele to honour his mother, who worked as a production assistant on film sets in Rome when he was a child. “I remember all the stories she told me, and the details and the sparkles, and the dream factory… back then we lived in a squat in the outskirts of Rome. I needed time to breathe. Those subversive tales helped me in piercing the grayness,” the designer explained on Instagram as models stormed the star-stamped boulevard.