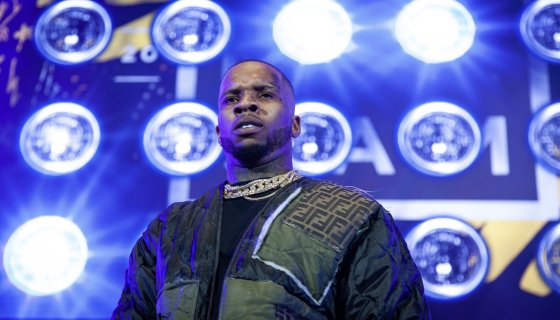 Lanez is not in good favor with a lot of people following the incident where he allegedly shot Megan Thee Stallion in both of her feet we learned just a few days ago. Fans want the miniature rapper/singer booted from the United States and banished to his native land of Canada for reportedly inflicting harm upon the leader of the Hot Girl movement.

If you think they are joking, a Change.org petition has been started calling for the deportation of Lanez, and it’s almost reached its goal of 25,000 signatures with over 17,000 and counting people signing up. The description of the call for action reads as follows:

“Deport Tory Lanez (Daystar Peterson) back to Canada and ban him from coming to America FOREVER. This little 5’3 man with a big ego has contributed nothing to the American Economy and promotes violence and violence against women. Furthermore, he should be banned from the United States FOREVER for intentionally trying to harm Megan the Stallion. SEND HIM BACK TO CANADA ASAP!”

“This little 5’3 man with big ego” has us in stitches.

Lanez is currently being investigated following his arrest on July 12 and was charged with felony possession of a concealed weapon. He is due back in court in October. Megan Thee Stallion recently broke her silence on the situation during an Instagram Live session where revealed the extent of her injuries while fighting back the tears while not mentioning Lanez at all. She also called those who thought it was a good idea to of her traumatic situation as well.

“I had to get surgery to get the shit taken out to get the bullets taken out. t was super scary … it was the worst experience of my life, and it’s not funny. It’s nothing to joke about. It was nothing for y’all to start making fake stories about. I didn’t put my hands on nobody. I didn’t deserve to get shot. I didn’t do shit.”

While Megan has been very careful with what she has been sharing, Adam22 from the No Jumper Podcast claims “trusted sources” told him that . He also claims that the rumored “couple” got into an argument because The Stallion wasn’t feeling how cozy Lanez and were getting.

We just wished we could the full details on this situation so it can go away. BUT if you want Lanez gone, you can head here to sign the petition.