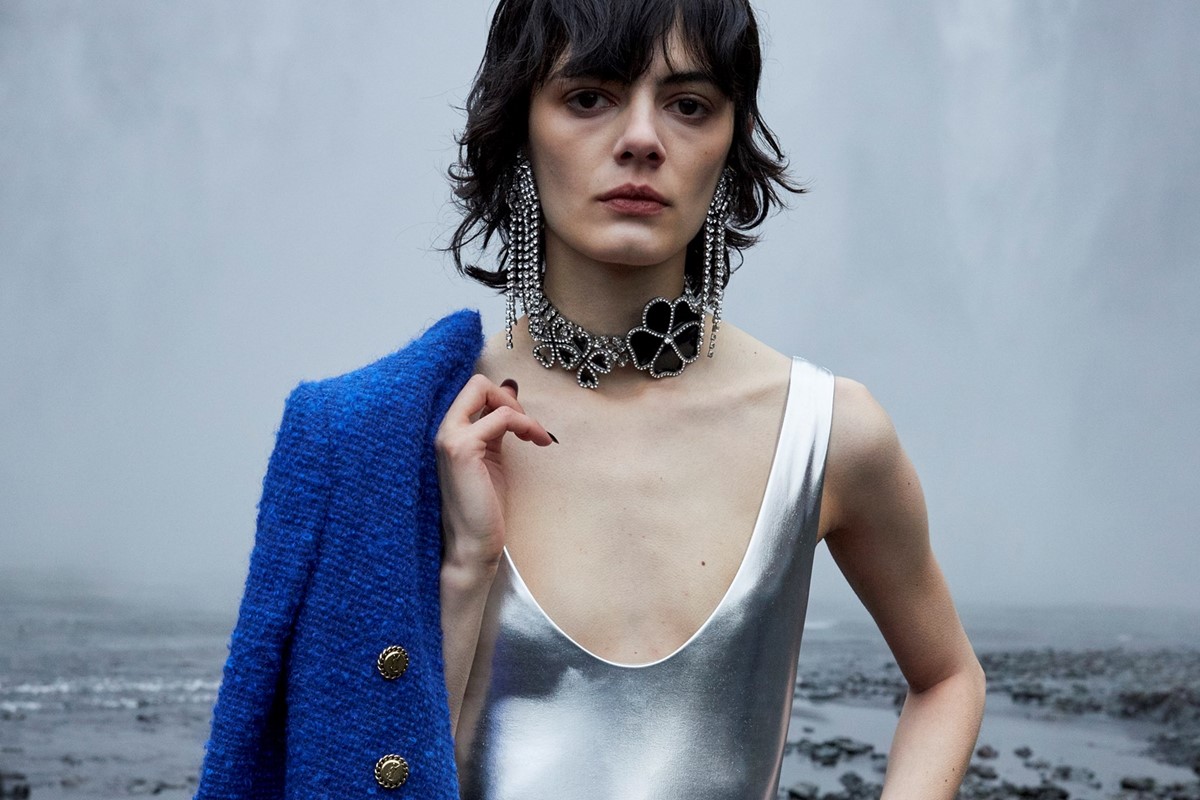 At Saint Laurent’s SS21 show, Anthony Vaccarello and his team hotfooted it to the desert. With only sand dunes as far as the eye could see, models stomped across the terrain in a series of high-glam looks we’d love to be dripping in as lockdown lifts (yes I’m looking at the diaphanous, feather-trimmed robes and matching slips).

Fast forward six months and the designer has social distancing still firmly in mind. For his AW21 show, which got its debut via a short film (surprise!), Vaccarello opted for a dramatic waterfall setting in… well, who knows? While he’s keeping the actual location close to his chest for now, at least one thing’s for sure – we’re not in Paris any more Toto. Instead, we stepped back in time.

Drawing inspiration from iconic musician Peaches and her avant-garde, all-over-the-place personal style for the new season, the collection read like a deep dive into the eclectic fashion mash-up that was the mid-00s. Slinky American Apparel-esque leotards were tucked into high-waisted, fur-trimmed mini skirts or otherwise layered – sans anything else – over semi-opaque tights. Tiny gold and silver hotpants featured heavily, too, which is great news for those of us who spent most of the last year stationary, while slightly more forgiving skintight jeans came in bold electro-clashing prints.

Elsewhere, boxy tweed jackets run through with glittering threads or otherwise presented in rich brocade were finished with ostentatious carved gold buttons, traversing the line between tacky and fab to just the right degree. Looks that harked back to Yves’ archives included sequined boleros and metallic tunics cinched at the waist with ostentatious jewelled belts, plenty of which were paired with killer thigh-high leather boots. Looks were finished with piled-high pearls and gemstones that could have been rummaged out of your gran’s jewellery box.

The overall vibe was that of a successful Brick Lane thrifting session before a night at Boombox headlined by Erol Alkan, which makes sense given Peaches’ place on Vaccarello’s AW21 moodboard. It also speaks to a shift in fashion – having spent the last few years mining the Y2K era until there’s only crumbs left, we’re moving on towards the late 00s and the OTT exuberance of the electro scene. That is, if Saint Laurent has anything to do with it. What’s that in the distance? The jarring synths of “Fuck The Pain Away”, obvs.

For yet another season, a shout-out must go to the Saint Laurent models, who more than earned their wages when it came to navigating the setting’s rough terrain. Picking their way across jutting rocks and slippery moss with such ease, it was as if they were wearing Crocs and not the house’s signature, vertiginous knife-point stilettos. The overarching message was of a return to messy, imperfect glamour come the autumn – we might be a little rough around the edges after a year in iso, but the important thing is that we’re having fun. Time to pack up those sweats and slippers, slip into something a little less comfortable, and ffs – throw some glitter on it, honey.

Watch the show below and take a look at the collection in the gallery above.