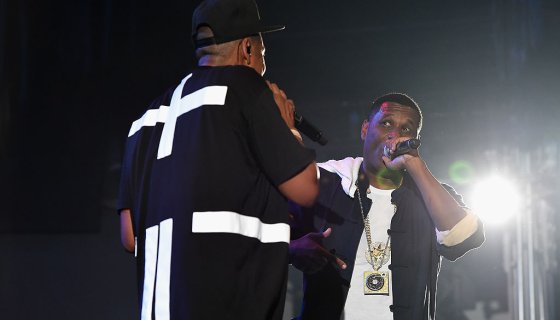 Jay Electronica actually did it. After over a decade of pump fakes, the New Orleans MC dropped his proper debut album,.

Peace, going live on IG & and my Youtube channel at 8pm pst.#AWrittenTestimony pic.twitter.com/8W9UGKMlxh

Interestingly, the first bars heard on the project, after an intro featuring the Honorable Elijah Muhammad, come from Jay-Z, who serves as the project’s executive producer. The track is called “Ghost of Soulja Slim” and it absolutely slaps.In fact, Hov is on like eight of the album’s 10 tracks.

But anyway, Twitter is already calling the album a classic despite barely giving it a full spin. But as you let it marinate and take it in, peep some of the already poignant reactions to the arrival of the long-awaited project below.

Was it worth the extended waiting time? Let us know in the comments.

Did they have to wait until a to finally drop it, though?

So the Jay Electronica and Jay-Z album is strictly through Roc Nation. No major label upstream? Wow. This is a game changer.

It's ridiculous we're actually listening to a Jay Electronica album. And it's really ridiculous Jay-Z is still spitting like this nearly a quarter century after 'Reasonable Doubt.'

Me waiting 11 years for a Jay Electronica album right down to the very 12am release time only to find out it's probably gonna be a Tidal exclusive pic.twitter.com/YbVm6G4peS

Jay Electronica on 2009 (Exhibit C): "Trying to find the meaning of life in a Corona"

A Jay Electronica album dropped in the middle of a global pandemic. Jesus is really on his way back yall

jay electronica droppin an album right around the time the world on the brink of ending. perfect 👌🏾

Jay-Z might be dropping some of his best verses on this Jay Electronica album. He sounds in the zone. #AWrittenTestimony

Jay-Z has had 3 kids, dropped 4 albums, fought Solange in the elevator, Cheated on Beyoncé, worked things out while I was waiting for this album. Now it finally here 😭😭😭❤ #AWrittenTestimony pic.twitter.com/fshns8g9A0

"Ya'll gonna make me turn into the Old jay, he's not as sweet as the old ye" #AWrittenTestimony pic.twitter.com/A7rg2JRRSz

I don't want to make it sound like Jay Elec isn't rhyming his ass off either. He is. But he brought out Super Saiyan Hov. #AWrittenTestimony

Jay Electronica album dropping tonight? This man made us wait a whole damn decade then decides to unload in the most tumultuous time I can remember 😂 What a power move. pic.twitter.com/n6ClY8WX6A

Hov in his sensei bag on this Jay Electronica album. pic.twitter.com/XChaMIlWMm