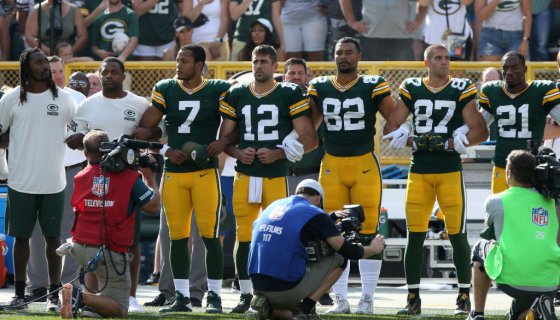 While , stepped in and took it home. The Green Bay Packers quarterback took to Instagram to comment on protesting, and sealed an invite to the cookout.

Highlight: @readdanwrite asks @drewbrees what the star NFL quarterback thinks about "players kneeling again when the NFL season starts."@drewbrees: “I will never agree with anybody disrespecting the flag of the United States of America or our country.”

As previously reported, in a recent interview when asked about NFL players kneeling before football games (a la Colin Kaepernick and in light of the protests across the globe), the New Orleans Saints QB went on to say he would never tolerate anyone disrespecting the flag. Maybe he didn’t hear the question correctly, maybe his TV has been off—but clearly Brees is one of those people who refuses to accept Kap kneeling was strictly about protesting police brutality, not disrespecting the Stars & Stripes.

Brees has been trending ever since, with potent condemnation from those sick of Black people being killed by police, and praise from the usual MAGA delegation who refuse to accept the intent of the protest no matter how often they’ve been told.

Then stepped in Rodgers with a Hail Mary of wokeness. Since the NFL was also misconstruing Kap’s motives, they warned players against kneeling back in 2017. Rodgers reminded everyone what him and his teammates did instead, and why.

For a caption of a black and white photo of the time Rodgers and his teammates did their own homage to justice, he wrote;

“A few years ago we were criticized for locking arms in solidarity before the game. It has NEVER been about an anthem or a flag. Not then. Not now. Listen with an open heart, let’s educate ourselves, and then turn word and thought into action. #wakeupamerica #itstimeforchange
#loveoverfear❤️ #solidarity
#libertyandjusticeforall #all.”

Twitter quickly hailed Rodgers for his allyship, and continues to slander Brees. Peep some of the best reactions below.

A few years ago we were criticized for locking arms in solidarity before the game. It has NEVER been about an anthem or a flag. Not then. Not now. Listen with an open heart, let’s educate ourselves, and then turn word and thought into action. #wakeupamerica #itstimeforchange #loveoverfear❤️ #solidarity #libertyandjusticeforall #all

It's still and always has been

Aaron Rodgers, um, sharing some thoughts on his Instagram … pic.twitter.com/9gB8btNjTw

2. Every single NFL player should be kneeling during the National Anthem

Aaron Rodgers: racial injustice is 'real' and Kaepernick should be in NFL.https://t.co/3kQc1OcgAP pic.twitter.com/1NFZYyWAX9

Aaron Rodgers just took the #1 White QB in the NFL title… can’t nobody tell me Drew Brees or Tom Brady the best. pic.twitter.com/5sb23XeF54

Season hasn’t even started yet and Aaron Rodgers is already 1-0.

I’m rooting for Aaron Rodgers. I don’t think I’ve ever said that before pic.twitter.com/QN11gHCmzW

He also did the Deion Sanders high step on the way to the end zone.