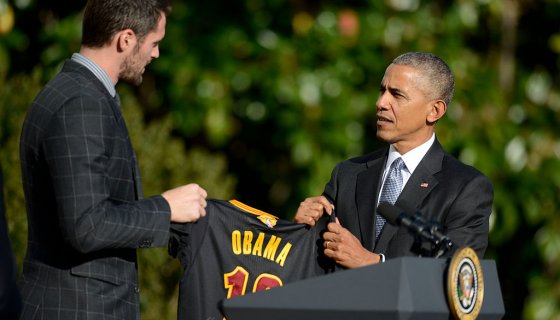 isn’t the only person coming to Chi-town for. Our forever president, , will also be making the trip to Chicago.

Obama will be joining the dozens of the NBA stars converging on the windy and very frigid windy city for the all-star festivities. According to officials from the Obama Foundation will hold a sit down conversation described as a ‘fireside chat’ with the NBA’s biggest stars, Cleveland Cavaliers’ Kevin Love, Oklahoma City Thunder point guard Chris Paul, and the Milwaukee Bucks’ MVP the night before the big game. ESPN commentator and Chicago native Michael Wilbon will also be a part of the event.

According to the Obama Foundation, the focus of the conversation will be about the importance of people doing work in their communities to make a positive impact.

Per the Obama Foundation:

“President Obama looks forward to talking with Giannis, Kevin, Chris, and Michael about one of the themes that has driven his career and now us here at the Obama Foundation: the importance of people engaging in their community to make a positive impact. It’s exciting to have the spotlight on Chicago this weekend, and we’re excited to help showcase this work in the city we love and where the Obama Presidential Center will come to life.”

During his presidency, Obama made it very clear that he was a hooper so it’s really no surprise he is back in the city where he has done the majority of work as a community organizer. His visit does come on the heels of a sit-in held at City Hall demanding a meeting with  Mayor Lori Lightfoot to discuss ways to protect lower-income residents who live near the Obama Presidential Center from the threat of displacement.

We still expect Obama’s visit to be a welcomed sight.