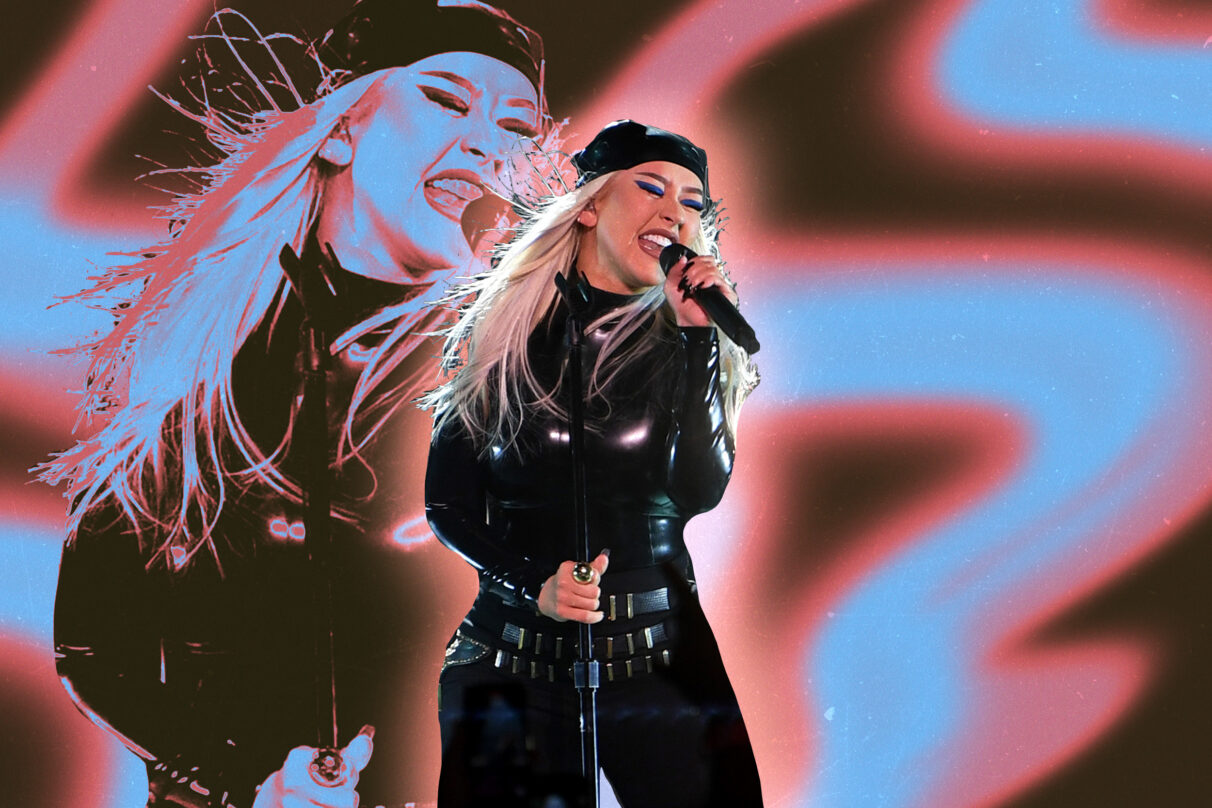 From Dua Lipa sporting a Blumarine butterfly-sequin crop top to low-rise jeans coming back into trend, it seems like everywhere you look, a piece of the early 2000s is popping up. And just when we thought 2021 couldn’t get any more noughties, Christina Aguilera makes a triumphant return to Latine music. Last month, Aguilera released “Pa Mis Muchachas” with pop darlings Becky G, Nicki Nicole, and Nathy Peluso. The collaboration is being touted as the lead single off of Aguilera’s highly-anticipated ninth studio album.

Earlier this week, the “Genio Atrapado” singer was announced as a performer at this year’s Latin Grammys—her first appearance since the inaugural event in 2000—fueling rumors that CA9 will be an exclusively Spanish-sung project. This performance and the new song mark Aguilera’s return to Latine music after the 21 year anniversary of the release of her first Spanish-sung album, Mi Reflejo. And to celebrate the diva’s return to música en español, we’ve compiled 10 of our favorite X-tina songs in Spanish throughout the years.

“Una Mujer” was originally released as “What A Girl Wants” off of Aguilera’s debut self-titled album. The Spanish version was reworked for Mi Reflejo into a more teen-pop-heavy production. The song features a more obvious electronic and dance-pop influence, with the strings adding an extra layer of depth to the sonic complexity. And while “Una Mujer” keeps the empowering theme of “What A Girl Wants,” Aguilera is sharper and more passionate in Spanish, almost daring the subject to treat her less than what she deserves.

While “Casa De Mi Padre” wasn’t an official Aguilera single, it deserved a place on this list for the showcase of the versatility of her persona. “Casa De Mi Padre” is the eponymous title track off of the somewhat problematic 2012 Will Ferrel comedy film by the same name, in which the actor’s character and his brother work to save their family ranch and fall into cahoots with a Mexican drug lord. Aguilera delivers one of her best vocal performances, at once flamenco-inspired and awe-inspiring. Mixing the soaring voice of a well-worn superstar with the deeply folkloric lyrics that tell of the love and hard work that went into creating the plot-centric ranch, Aguilera once again shows her versatility of leaping through genres and her mastery of storytelling through her music.

It would be almost insulting to not include “Mi Reflejo” in this list, since it was the song that started it all. In the unauthorized biography Christina Aguilera: A Star is Made, the author recounts how a young Aguilera was sent to Disney from RCA Records after citing that they had financial difficulties. But after hearing her demo cut of Whitney Huston’s “Run to You,” she was soon selected to be the voice behind the Mulan soundtrack. Soon after, Aguilera was signed with RCA, catapulting her to household name status. The Spanish version of the beloved Disney classic is more pop-heavy and definitely less sentimental than the original, influenced by the slow Latine pop hits of the time. Whilst the translated lyrics do not exactly fit into the note structure of the backing track, Aguilera sings with the same passion I imagine she had the first time she stepped into the recording booth, and for that, it lands at number eight on this list.

Penned by the legendary songwriter Diane Warren for Aguilera’s debut album, “Por Siempre Tú” takes “I Turn to You,” an already unforgettable ballad, into an instant classic. There’s just something about Aguilera repurposing her debut’ songs for Mi Reflejo that makes them sound elevated. While the addition of electric guitar-heavy songs does harm, the passion of the new lyrics’ diction and Aguilera’s commitment to putting everything within her to reinvent herself shines through.

This compilation of Aguilera’s songs would not be complete without paying homage to her collaboration with the master of romanticism, Andrea Bocelli. Off of Bocelli’s album, Amore, Aguilera’s “Somos Novios” shows her continued vocal prowess, tapping into her flair for theatrical style storytelling through her music. It’s an impressive feat in and of itself to sing next to Bocelli, but Aguilera not only stands toe-to-toe with him but possibly outshines him when it comes to vocal runs.  The song is tender and romantically expressive, taking the listener on a journey through the lived-in relationship between Bocelli and Aguilera’s parts. The track itself has been widely covered, originally created by Armando Manzanero in 1968.

Showing the more pop-side to Mi Reflejo, “Ven Conmigo (Solamente Tú)” is a translation of Aguilera’s “​​Come on Over Baby (All I Want Is You).” The English version was Aguilera’s fourth and final single off her debut album, peaking at No. 1 on Billboard’s Hot 100 charts and reaching top 10 in several other countries. “Ven Conmigo (Solamente Tú),” however, is nothing to scoff at. It’s yet another impressive rework of an already successful hit, with many going as far as saying that it’s actually the superior version. The song was so successful in the Latin market that Coca-Cola used it in a commercial that aired all over Latin America.

It’s a rare power to be able to take one of the most covered songs of all time—in this case, one of the most acclaimed boleros in the history of Cuban music—and make it unforgettable. But Aguilera, with her version of “Contigo En La Distancia,” did just that. Aguilera adds in the mix of raw talent, tender romanticism, and powerful modernism that its predecessors lacked. As an artist who was just on her second studio album and attempting her first Spanish-sung project after successfully establishing herself in the American market, Aguilera’s powerful reclaiming of the otherwise understated “Contigo En La Distancia” is not just a stand-out on Mi Reflejo, but in her entire discography, showing her true star power.

The soundtrack to the bounce back from so many of our young heartbreaks, this salsa-infused banger is a symphony of horns, piano, and self-empowerment. The third single off of Mi Reflejo proves that the third time’s the charm. From unforgettably biting one-liners, “Yo no soy muñeca que no opina, esa no soy yo, no, no” and “Que de amor tú no conoces nada,” to the background beat that was just made for clapping your hands along to it, to Aguilera’s signature rasp all accentuated the drama of a lover who needs to love you better. “Falsas Esperanzas” was rightfully one of Aguilera’s most critically acclaimed pieces and a moment within her discography that helped solidify her into the fiercely self-confident and empowering figure we all know and love.

The second single off of Mi Reflejo,“Pero Me Acuerdo De Ti” is one of Aguilera’s classics. The 2000s-era synth beat mixes with the romantic acoustic guitar beautifully for a time capsule of heartbreak. And who could forget the stunning whistle note Aguilera performs towards the end? It’s passionate, angry, and sappy all at once. In terms of critical acclaim, the track reached  No. 8 on Billboard’s Hot Latin Songs and peaked at No. 5 on Hot Latin Pop Songs in the U.S. “Pero Me Acuerdo De Ti” is a cover of Lourdes Robles, and both tracks were produced by the exceptional Rudy Perez, Aguilera’s frequent collaborator.

“Hoy Tengo Ganas De Ti,” which Telemundo fans may recognize as the main theme from the William Levy-led telenovela La Tempestad, is Aguilera’s latest Spanish offering before this year’s great comeback “Pa Mis Muchachas.” “Hoy Tengo Ganas De Ti” holds the coveted number one spot on this list because it shows Aguilera at her best: cinematic, confident, and with her vocal prowess on full display. The song combines all of the romanticism of your grandparents’ favorite slow dance song with the passion of a romance movie. The music video, which fits the over-the-top cinematic style perfectly, depicts Aguilera and Fernandez roaming throughout an old-money style mansion, each in separate corners singing of their longing for each other before meeting in a fairytale-like extravaganza.