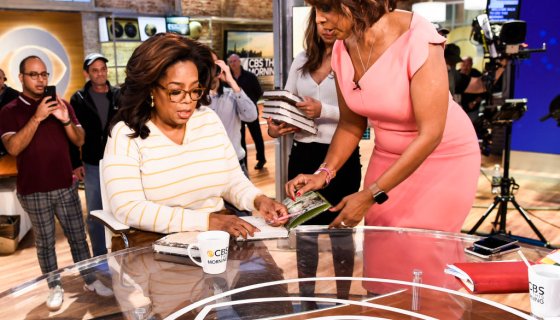 is speaking out about the backlash that her best friend has been subjected to after a over NBA legend ’s 2003 ual assault case hit the web.

During an interview on Today with Honda & Jenna, a choked up Oprah came to the defense of her friend backing Gayle’s claim that the network, CBS, threw her under the bus by releasing the salacious clip out of context; which led to King being dragged online and reportedly receiving death threats.

“She is not doing well. May, I say, she is not doing well because, she now has death threats and have to now travel with security. She’s feeling very much attacked,” Oprah said tearfully (see the clip below). “It was only because somebody at the network put up that clip, and I can see how people would obviously be very upset if you thought Gayle was trying to press to get an answer from Lisa Leslie.”

“I think the vitriol … anybody can criticize anything, but the misogynist vitriol and the attacking to the point where it is dangerous to be in the streets alone because it’s not just the people who are attacking. It’s the people who take that message and feel like they can do whatever they want to because of it,” Winfrey continued. “You try to be there for your friends, but this is very hard.”

Tough indeed. on Thursday (Feb. 7) Gayle King tried to counteract some of the backlash by revealing that the clip didn’t reflect the true nature of the interview nor her intent with the round of questioning; but her appeal to the public seemed to fall on deaf ears.

“I’ve been up reading the comments about the interview I did with Lisa Leslie about Kobe Bryant, and I know that if I had only seen the clip that you saw, I’d be extremely angry with me too,” Gayle King said on Instagram. “I am mortified. I am embarrassed and I am very angry. Unbeknownst to me, my network put up a clip from a very wide-ranging interview — totally taken out of context — and when you see it that way, it’s very jarring. It’s jarring to me. I didn’t even know anything about it.”

Although King has apologized publicly, the comments by celebrities including Snoop Dogg and Lil Duval have had a severe impact on King leading her to be noticeably absent from her show on Thursday due to safety concerns.

Conceding and taking fault, CBS released a statement on Thursday confirming King’s account of the situation and apologizing for placing her in the terrible position to be eviscerated by the public.

“Gayle conducted a thoughtful, wide-ranging interview with Lisa Leslie about the legacy of Kobe Bryant. An excerpt was posted that did not reflect the nature and tone of the full interview. We are addressing the internal process that led to this and changes have already been made.”

Check out the interview here.