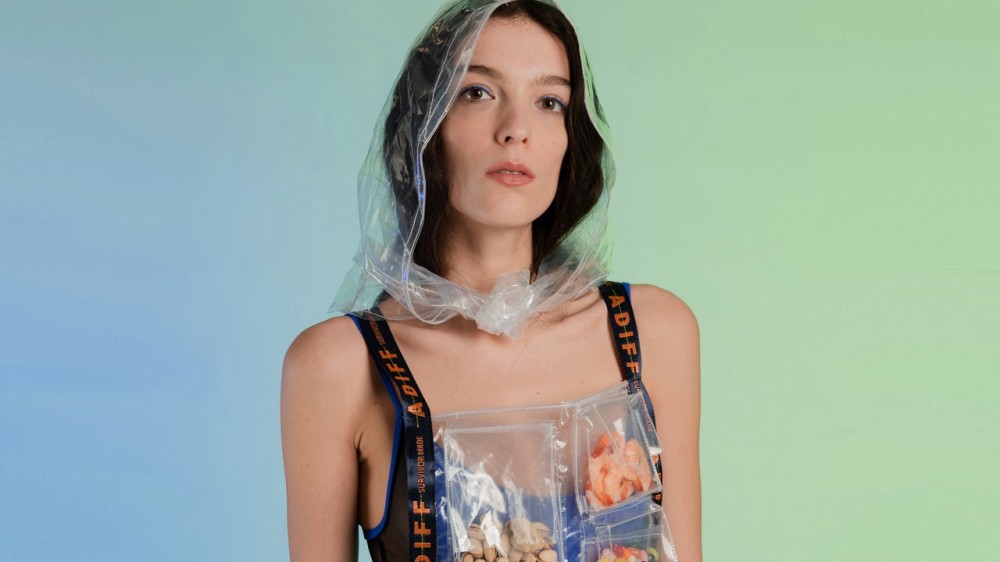 You can spend almost a decade writing about fashion, and your laptop will still autocorrect lookbook to cookbook. It’s such a persistent, minor frustration that at first glance, ADIFF’s new book, Open Source Fashion Cookbook, looks like a typo. In fact, the cheeky name comes down to what’s inside: not runway photos or the behind-the-scenes images you might find in other designer tomes, but “recipes” for making your own clothes and accessories. The catch is that you can only use existing garments or materials as your ingredients.

The DIY projects range from simple additions, like a Perspex pocket you can tack onto a jacket, to more complicated, complete garments, like a shirtdress made from two button-downs; a bucket hat that repurposes a broken umbrella; or a 53-step blanket coat. Several designers contributed patterns from their archives, including Christopher Raeburn, Assembly’s Greg Armas, and Chromat’s Becca McCharen-Tran.

Those familiar with ADIFF, the three-year-old New York label by Angela Luna and Loulwa Al Saad, already know it’s a brand dedicated to sustainability and social justice. Many of their clothes are made with upcycled fabric, and their hero piece is a slick parka that transforms into a tent with the addition of a few poles. Launched in 2017, it’s sold on a buy-one-give-one model, with every jacket purchased providing another to a displaced or homeless person. It’s come to represent all of ADIFF’s tenets: that garments can be multi-functional, beyond simply clothing our bodies; that fashion should be both useful and inventive; and that what we wear should relate to the world around us.

In 2020, ADIFF planned to roll out a few designer collaborations, but they were put on hold during the pandemic. Lula and Al Saad spent the extra time sewing thousands of face masks for New York hospitals (they’re now available on their site, also on a buy-one-give-one model) and taking part in the Black Lives Matter protests. That’s where Luna found her inspiration for the cookbook: “It was the end of June, and I’d spent all this time at the protests and was feeling really frustrated by the industry,” she says. “All of these things were happening in the world, but I didn’t see them [reflected by] fashion at all. And that’s the reason I started ADIFF in the first place—to draw connections between global issues and fashion.” She felt particularly turned-off by the fact that even well-intentioned brands still ultimately ask us to buy something from them. How could ADIFF help people engage in fashion and sustainability outside of the traditional system?

“I had this crazy idea to get a collective of designers together so we could work on actually making sustainability accessible and inclusive,” Luna says. “If you don’t have a few hundred dollars to spend on an outfit, you can still participate.” Luna and Al Saad worked with illustrators and designers to create the patterns for their new collection and reached out to designers to ask for their contributions, too. Raeburn’s signature “shark,” a cross-body bag shaped like a Great White, gives the book its serendipitous ending: All of the scraps you’d accumulate from other projects become the “stuffing” in the body.

A few years ago, it’d be difficult to imagine designers sharing their intellectual property so freely. Now, it feels like the logical next step towards a more open, community-driven fashion industry. We got a glimpse of its potential earlier this summer, when Jonathan Anderson shared the pattern for a patchwork cardigan Harry Styles wore, which sparked a DIY movement on TikTok. “You never really own a design anyway. You have to let go of it,” he said at the time. “I think it’s great people are finding joy in it.”

“My dream would be for every designer to start releasing one or two patterns every time they show a new collection,” Luna says. “I think this is going to initiate a larger movement, because it’s really at the front of everyone’s minds.”

In addition to leading that movement, Luna hopes Open Source Cookbook will be a resource for consumers, fashion students, and designers looking to repurpose their archive or deadstock materials. It’s being published as a paperback and e-book through Amazon for $60, and the first page includes a transparent breakdown of the cost: Amazon takes a 40% royalty; printing is $20 per book; and ADIFF is sharing part of the profit with the designers who lent their patterns. That means ADIFF will make $10 per sale. For those who can’t afford to buy the book, the patterns will also be available to download for free on their website.

“I would love to challenge people to think more critically about what they’re buying and how they engage with items that are already in their closet,” Luna adds. “We just want to create less reliance on the industry. Maybe you have an old shirt you were planning to throw away and replace [with a new one], but we want to show people that you can be self-sufficient. You don’t necessarily need to rely on brands to create these things for you. My goal is for this to become like a Merriam-Webster dictionary on your bookshelf—a household book everyone can use.”

Open Source Cookbook is available on adiff.com and Amazon.