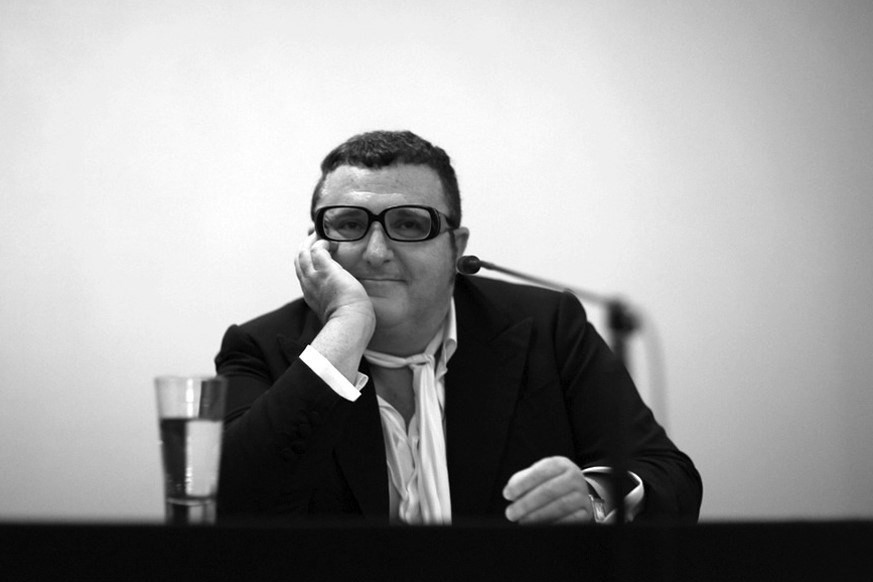 In the wake of the designer’s sudden passing, we take a look back at some of his most touching, and revelatory, quotes

Generous, slightly eccentric, and forever sensitive to the increasingly complex, and often contradictory, nuances of modern womanhood, the sudden death of Alber Elbaz has cast a deep shadow over the fashion industry – not least because of his era-defining turns as creative director of Lanvin or Yves Saint Laurent, but because he was, it would seem, one of the good ones.

Though the Morooccan-born Israeli designer was forthright in his criticism of fashion’s profit hungry boardrooms, he has always defended against the industry’s commercial slam with a deep sense of servitude and optimism. As evidenced by an abundance of archival interviews, when it came to his own fashion, Elbaz would drop plain-spoken language for long, unfurling metaphors. Particularly those relating to physical embrace, medicine, and food. Tender allegories which sought to pin down his unique affinity with clothes and the women who wore them. For Elbaz, clothing comforted, healed, and nourished. “What do women want? What do women need? What can I do for women to make their lives better and easier?,” he said of his design process in 2014. Below, we trace the late designer’s 59 years through some of his most telling quotes.

This quote comes via Natalie Portman, who wrote a short piece in honour of Elbaz in 2007 for Time magazine. In the article, the actress speaks of how Elbaz would frequent the Lanvin shop floor from his studio above, speaking directly to his customers, sometimes adjusting the length of a skirt or the size of a hoop earring, always attuned to their changing needs and preoccupations. As a quote, it’s testament to Elbaz’s sense of humility.  And though his fantastical fashion would have you thinking the opposite – all hot pinks, cascading jewels, and chiffon ballerina dresses – he did not attribute any grandiose meaning to clothes. For Elbaz, the transformative power of fashion was never to distract or disguise, but to help a woman see herself more clearly. “The metamorphosis a woman feels when she puts on one of his dresses should originate in her rather than the cloth,” he taught Portman.

“If I wasn’t a designer I would love to be a doctor. That is my fantasy, my dream. A doctor will give you a tablet if you have a headache and I will give you a dress and we both make you feel good.” The Guardian, 2007

Born in Casablanca, Morocco, in 1961, Elbaz’s family moved to Israel when he was just 8 months old. He started drawing dresses at the age of 7 but by the time he turned 18, he was operating rifles as part of a government-sanctioned military service. In 1985, his mother sent him off to New York, with $800 dollars in his pocket, to pursue a career in fashion. And after a short stint making “horrible mother of the bride dresses” in the city’s garment district, he was hired by Geoffrey Beene, before moving onto Paris for Guy Laroche, YSL, and Lanvin. Yet throughout his many moves, his philosophy remained the same: that fashion should make women feel good. Alber Elbaz loved women and his latest project, AZ Factory, was only set to deepen this will to serve – at a more accessible price, without heed of season or size.

Despite heading up two of the most famous fashion houses in Paris, Elbaz never drank the kool aid. Rather, Elbaz was a rare outsider, wary of life on the inside of the gilded cage. After all, he had experienced the industry’s barbarism first hand, having been usurped at Yves Saint Laurent by Tom Ford, just three seasons into his tenure. His second came when he was dramatically ousted from Lanvin in 2015. Throughout his career, much was made of Alber’s personability, his willingness to dress not just superstars, but their unknown sisters, and mothers, too. Julianne Moore led tributes to the designer this past weekend, recalling the time Elbaz dressed her sister, calling her “a bombshell” and remarking “that is how my dress should be worn”. Perhaps it was because Elbaz himself felt alienated from fashion’s glitterati, often subject to scrutiny over his weight, which he admitted was “a very big deal,” to The New Yorker in 2009, imagining how life as a skinny person would be “amazing”. It’s an indictment on the industry, that as much as Elbaz was at the centre of fashion’s inner circle, he too felt ostracised by its elitist trappings.

As much as fashion was functionary for Elbaz – a solution-oriented business to aid women in their day to day ventures – it was also an escape, something the designer relied on as a child.  “We didn’t have money for toys. The only thing my parents had in the house was a chess set. When I was little, I took my father’s silver foil and started to make dresses for all the chess pieces. I made up characters for them and played with them for hours,” he once told fashion critic Sarah Mower. His creations at Lanvin, too, were era-defining in their bold frollicks into fantasy-land. Think big platform heels, spangly necklaces, ruffle-heavy mini-dresses, or vibrant silk slips which were ruched up and away from the body. Designs which spoke directly to the serotonin-hungry recession-era woman.

“The screen has to scream, baby. That’s the rule. Loudness is the new cool, and not only in fashion, you know. I prefer whispering.” The Fashion Group International awards, 2015

In recent years, Elbaz had become something of a spokesperson for the need to reform the fashion system and the pressures increasingly placed on its designers. As he said in 2015, accepting the Fashion Group International award, “We designers, we started as couturiers,” asking: ‘What do women want? What do women need? What can I do for a woman to make her life better and easier? How can I make a woman more beautiful?’. “And now, we have to become image-makers, creating a buzz, making sure that it looks good in the pictures. The screen has to scream, baby. That’s the rule. Loudness is the new cool, and not only in fashion, you know. I prefer whispering”. Fittingly, Elbaz would often invite editors and journalists to collection previews, which were hidden away in hotel rooms or restaurants. Exhibitions which were less a show of exclusivity, more a signal of humility, championing togetherness and community in an increasingly frigid fashion world. “I like these little presentations, because in a room with couches people feel special. They stop being journalists and they are just women,” he said.

Speaking on his collaboration with Tods in 2019, Elbaz returns to his trusty use of metaphors. This time, he uses food, the great comforter, to describe his need for modernity in design. “I work to always find the middle between the fantasy and reality,” he says. “Because if it’s not edible, it’s not food. And if it’s not wearable, it’s not fashion”. In many ways, this summarises how Elbaz positioned himself as a designer – not as some lofty poet wrestling with abstract concepts, but a soothsayer who centered his craft and intuition around the lived experiences of real life women. “Embracing everything about the present day, and about women’s lives, giving joy,” as he worded it.

“I don’t want to make clothes that bring more stress to women. I want my dresses to be like hugs.” At the launch of AZ Factory, 2021

This quote came from the launch of Elbaz’s latest venture, but could just as easily have come from any of his 15 years at Lanvin. While he was at the helm of the Parisian label, Elbaz transformed Lanvin from a relicky fashion house into a red-hot entity on the fashion week circuit full of puffed taffeta dresses and glitzy hardware, enveloped in bright layers of tulle and dynamic drapings of satin. It was totally in line with what women wanted – within even the most frivolous of flourishes, Elbaz’s collections stayed true to purpose and practicality. It was the result of talent and natural insight, sure, but it was honed because he had aligned himself with the women in his life.

During his private shows at the Hotel de Crillon, he would explain how he’d witnessed the daily pressures of women juggling a family, a career, and a social life. As a result, he frequently explained how his clothes would cater for the quick-change, scene-shifting demands of women’s lives. It was a level of empathy, which has been bubbling throughout his career, even back in the Israeli Defence Force, where he was in charge of entertaining the soldiers. “I saw how many were lonely away from home and I saw how many ladies were lonely in elderly homes,” he said, “so what I did was bring them together and arrange dances every week. And everyone was happy!”