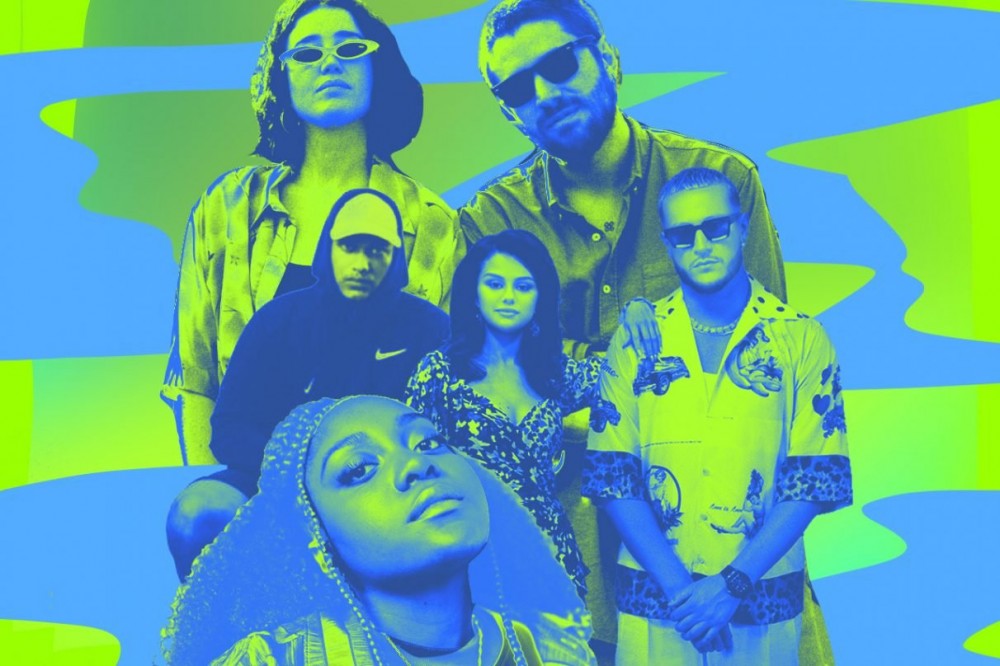 This is a weekly compilation of bite-sized song & EP reviews from our music writers. Discover new favs, read nuanced criticism of the week’s hottest releases & more.  Follow our playlist featuring these tracks and more on Spotify or Apple Music.

Noname has provided enough proof of her singular ability as a rapper since her 2016 mixtape, Telephone. Playing out with prose, poetry and hip hop—like a velvet-voiced wit juggler—she keeps on showing how to sort out micro and macro woes in the space of a beat. “Rainforest” takes off as a warming bossa nova that would fit just fine in the elevator soundtrack. But it takes no more than 8 bars until the 29-year-old rapper goes back and forth between lovesickness to rage against millionaires. “Rainforest” is a melancholic manifesto with aftertaste: when hard times come and melancholy takes over, the revolution urges. —Felipe Maia

Are we ready for a tropical house revival? The genre is likely not ready to come out of posh hotel lobbies and into the mainstream again but the superstar team-up of Selena Gomez and DJ Snake makes the case that, in the right hands, that style can still emanate some heat. Perhaps the duo’s most successful collaboration, “Selfish Love,” finds Gomez hushing in Spanglish about infidelity and jealousy while Snake keeps an afternoon-at-the-beach vibe throughout the track. “Selfish Love” also seems to signal the arrival of warmer nights. —Marcos Hassan

Based in Santiago de Chile, Venezuelan singer/songwriter José y El Toro has come up with a delightful clash of old and new on his latest single “Mi Mejor Canción.” The artists managed to marry classic bolero stylings with autotune-drenched R&B-inspired vocals, also using his lyrics to pay homage to boleristas and their love for drama. He needs tragedy to fuel his songwriting, and he’s willing to give up a loving relationship to get there. —Cheky

Sotomayor member Pahua documented the self-discovery process she underwent last year during quarantine on Ofrenda—a six track EP full of love and empowerment. One of them being the tropical “¿O Vas O Voy?” the most effective club moment on Ofrenda, where Pahua shakes off the negative things that weigh on her mind and steal her joy in order to find that perfect balance we all crave for. —Cheky

Spanish singer-songwriter Muerdo has unveiled the final single ahead of his anticipated new album La Sangre del Mundo, enlisting none other than Lido Pimienta for a smokey, cinematic tale of heartbreak titled “A Volar.” Assembling charango, horns, a dash of cumbia andina and hefty Manu Chao vibes, the track’s powerful vocal performances evolve into a gut-wrenching conversation on our primal need for closure and how sometimes letting go of love is the best way of keeping it alive. —Richard Villegas

When Leall broke through with the single “Cachorrada” in mid-2019, it’s very likely that Brazil’s hip-hop lead players trembled. It was then that the Rio de Janeiro young rapper announced that 2020’s reckless favela stories could be told with aesthetics way beyond trap music. His new album, Esculpido a Machado, assures those clues were for real. “Duas Pistolas” is the EP’s second song—the first track being a ruthless preface on the violent daily lives of black youth in Rio, an echo to Brazilian rap masterpiece Sobrevivendo no Inferno (1997). Like a young soldier engulfed by drug wars in the marvelous city Leall rhymes over the spooky, wobbling beat assembled by Diigo. Vivid colors for real times. —Felipe Maia

Colombian-Andalucian trio Çantamarta have made a splash over the past few years by cultivating a unique mix of neo-soul, bolero and robust acoustic instrumentation that builds into massive bohemian anthems. Their latest single, “Florentino,” finds the group collaborating with Venezuelan rapper Willie DeVille for a soaring jam beefed up with elements of hip-hop and rock; unfolding as a poetic affirmation about the deep hustles and little milestones that pave an artist’s winding path. —Richard Villegas

Long time friends and first time collaborators, Vanessa Zamora and Juan Pablo Vega have shared their co-written sweet dedication to the rougher side of a relationship’s ending with single “Dejarnos Ir.” Navigating the difficulty of learning to let go of someone as a relationship has come to its end, the duo use their complimentary styles of eclectic pop to create a danceable song that’s upbeat, yet matches the softness of its entangled lyricism.  —Jeanette Diaz

While it would be enough for these Lima punks to make a loud racket, their song “Aquí No Hay Nadie” stands out by sneaking melody and catchy riffs throughout the pessimistic anthem. Emphasizing their place in Peruvian punk history by combining melody and dirtiness, Morbo gives us one of the most topical songs about feeling angry about the world’s injustices, immaculately delivered by their songwriting chops and passion. —Marcos Hassan

Marinero (Jess Sylvester) celebrates his upcoming debut album “Hella Love” and recent signing to Hardly Art with first single “Nuestra Victoria,” a song heavily inspired by the stylings of grupos romanticas, electronica and a dream pop flair. The title of the song references the name of a local panaderia in Marinero’s childhood neighborhood of San Francisco’s Mission District—a bakery that is no longer there due to gentrification. The metaphor serves as a spirited love letter to the ever-changing landscape of the city that raised him. —Jeanette Diaz