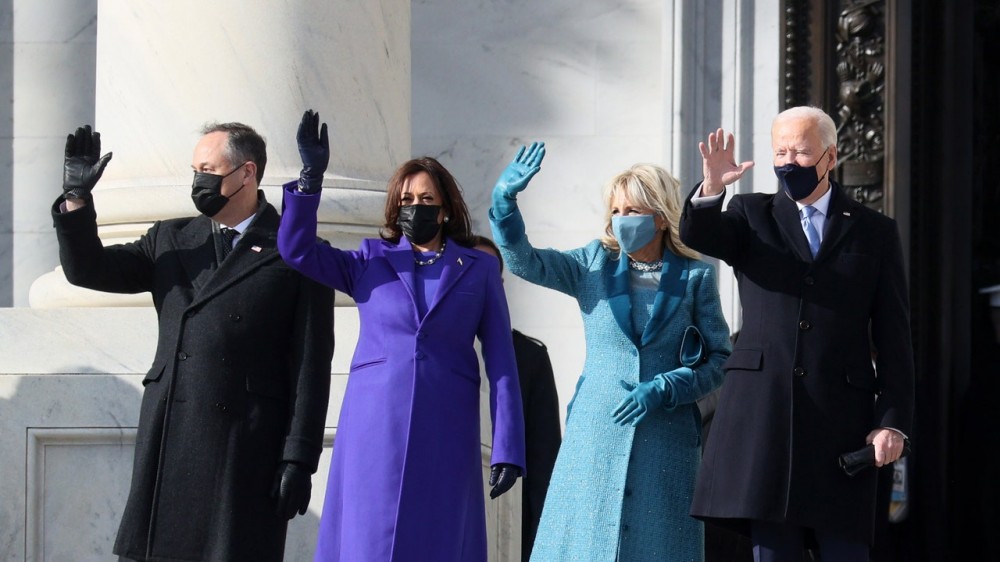 There’s no shortage of symbolism on Inauguration Day. From the bible used for the swearing-in to the guests invited to watch the ceremony and the clothes worn by the president and first lady, each and every element has meaning.

For the historic occasion, Joseph Biden wore Ralph Lauren. Jill Biden chose a blue coat embroidered with Swarovksi crystals custom made for her by Alexandra O’Neill of the emerging New York label Markarian. Blue, of course, is the color of the Democratic party. Symbolically, as the color of the oceans and sky, blue stands for serenity and stability. It says: Cooler heads will prevail. Coincidentally, Nancy Pelosi, the speaker of the house, chose a similar shade for today’s pageantry.

But Dr. Biden’s outfit has subtler connotations. In 2017, her predecessor Melania Trump wore Ralph Lauren, an American designer of global renown. Markarian, in contrast, is a newer name to most fashion insiders, though Lizzo, Laura Dern, Kerry Washington, and Priyanka Chopra Jonas, among others, have worn the brand’s fashions on the red carpet. Coming on the heels of the coat by the Mexican American designer Jonathan Cohen that she chose for the COVID Memorial yesterday, it suggests that Dr. Biden will be a proponent of emerging American fashion. A press release from Markarian states: “The look was carefully crafted by a small team in the heart of New York City’s Garment Center and hand-finished by O’Neill in her West Village studio. Alexandra is incredibly humbled to be a small part of such a historic moment.”

Dr. Biden would seem to be following in Michelle Obama’s footsteps. In 2009, on her husband’s first Inauguration Day, Mrs. Obama wore a yellow coat similarly dusted with Swarovski crystals by Isabel Toledo, a Cuban American designer, and she wore and supported young American talents throughout her eight-year tenure as first lady. It seems fitting, then, to quote Michelle Obama’s latest Instagram post: “Today is the day. After a disturbing era of chaos and division, we are entering the next chapter of American leadership.… Right now I’m feeling more than just relief at putting the past four years behind us. I’m feeling genuinely hopeful for what’s to come.”