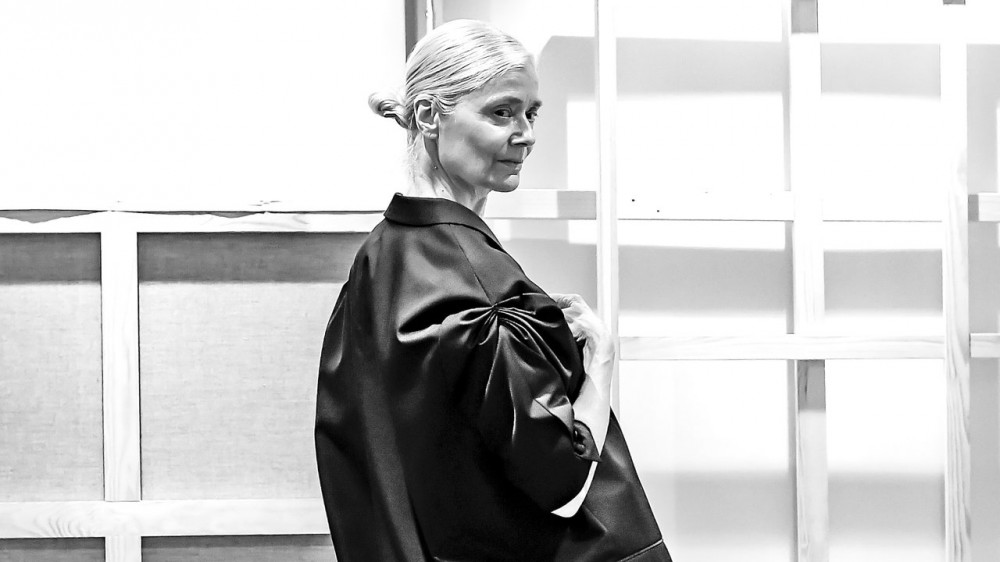 “As there are Sunday painters,” declared Olivier Saillard at the intimate presentation he held in his tiny studio during couture week to showcase his latest Moda Povera collection, “I am a Sunday dressmaker.”

It seems, however, that Saillard, the former curator of Paris’s Palais Galliera, who is currently working with Fondation Azzedine Alaïa on that institution’s impressive exhibition program (showcasing not only the late designer’s work but also Alaïa’s breathtaking collection of historic fashion), was selling himself short. His astoundingly imaginative Moda Povera collections, which are built around the idea of repurposing inexpensive pieces of clothing—over-scale cotton t-shirts found on the internet, for instance, or men’s white shirts—with couture workmanship, prove that Saillard is no fashion dilettante.

This season he sleuthed a collection of low-priced size 8XL (that is size 70) men’s suits from the mass market retailer Kiabi in black synthetic fiber (jackets originally priced at $45, pants at $25). With the help of Martine Lenoir, a former dressmaker at the couture house of the legendary Madame Grès (whose work Saillard presented in a powerful monographic exhibition at the Musée Bourdelle in 2011), and a tailor who once worked with no less a figure than Cristobal Balenciaga himself (the designer whom even Christian Dior acknowledged was “the master of us all”), as well as muse Axelle Doué, the ’80s star runway model who also worked with Madame Grès, the pieces were miraculously transformed into superbly fashioned haute couture constructions.  “Twisted and modified,” Saillard has written of the interventions that he wrought on these banal suits, they “become objects of reflection where one can read the history of fashion as if they are poems in homage to all the masters I have studied or admired.”

The remarkable Doué appeared in one of Saillard’s fashion history performance pieces, where she recalled Madame Grès’s injunction during fittings that her legendary draped jersey dresses should “kiss the floor” and sat at Doué’s feet to ensure they did just that. With her natural elegance Doué tried on suit after suit—40 iterations in all—stepping daintily in and out of the pant legs and her high heels in a master class of comportment. Those enormous pants were cut to wrap and swathe at the waist, while Grès-like pinwheel tucks, or Balenciaga seams and construction techniques applied to the sleeves and shoulders, re-shaped the jackets to harness the volumes or create harmonious boule shaped forms.

Saillard is talking about establishing a practice where the masters of couture whom he has sleuthed would transmit the secrets of their craft to a new generation. We can only hope that he does because the results of these interventions were pure alchemy and showed that the essence of haute couture does not need to rely on over-the-top statements and fantastical embellishments, but instead can lie in the quiet, impeccable gesture, and in the perfection of cut and subtle detail.