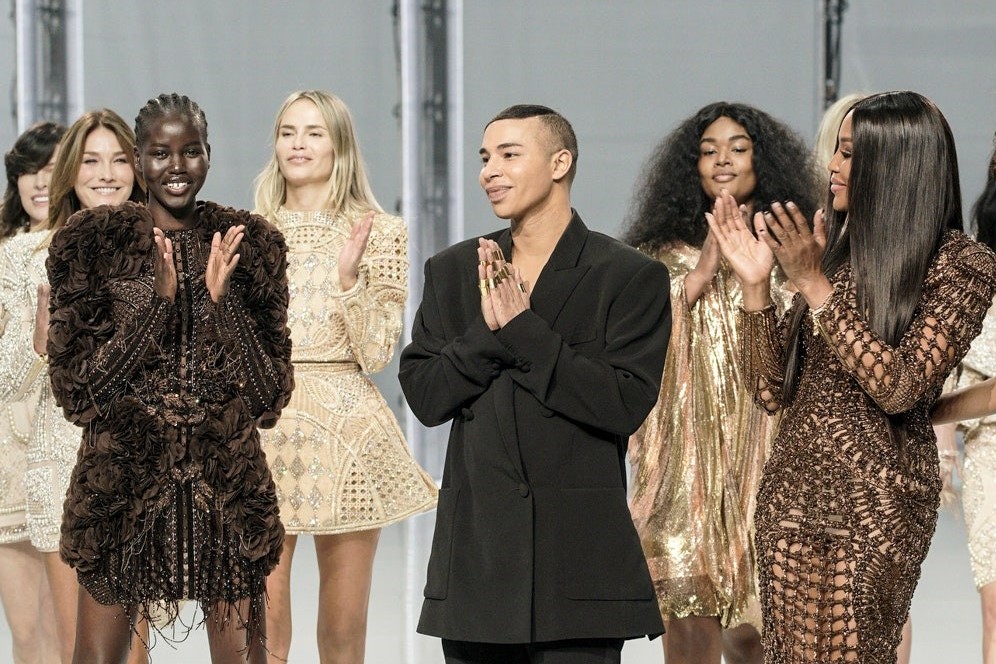 A whole host of fashion icons, including Naomi Campbell, Precious Lee, and Adut Akech, also marked the occasion at the label’s SS22 show

A whole decade ago, Olivier Rousteing took charge of Balmain at the tender age of 25, and obviously the ten-year anniversary wasn’t going to pass us by without some sort of glamorous spectacle. Enter: the label’s star-studded SS22 show, which saw everyone from Adut Akech, to Carla Bruni, to Beyoncé (well, Beyoncé’s voice) descend on the Paris runway.

Serving as the climax to the second instalment of Balmain Festival — a two-night affair that offered music, food stands, and limited edition merch during Paris Fashion Week — the show opened to a massive audience with a range of chunky gold chains, quilted leather, puffer bags, and slouchy silhouettes.

History-making models Precious Lee and Alva Claire were among those that made an appearance, with Naomi Campbell stepping in to open up the second part of the show, which consisted of a particularly glittery and glamorous capsule, drawing on Rousteing’s favourite pieces from the past decade.

Beyoncé, meanwhile, didn’t show up in person, but contributed a heartfelt message to the show, reflecting on Rousteing’s vision for the French house and achievements over the course of the last ten years. “You helped me make my musical statement,” the singer says. “You helped me amplify my message. Your designs have made me feel powerful… Balmain is your amazing tool for both beauty and change. Your outlook, your convictions, and your talent have affected and moved all of us.”

Sticking to the musical theme, Doja Cat followed up the show with a special performance at Balmain’s music festival, with a set from Franz Ferdinand rounding out the evening. Watch scenes from the catwalk, soundtracked by Beyoncé’s message, below.