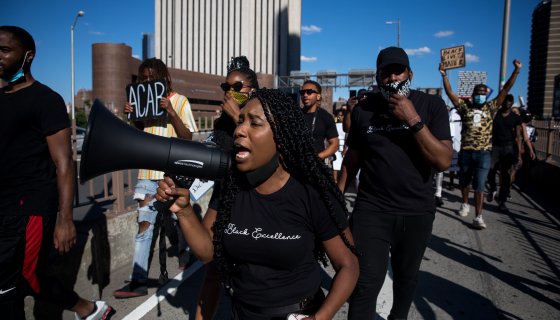 At the height of the George Floyd protests police were captured on video committing all kinds of atrocities against peaceful protestors across the board, but one of the more disturbing incidents came from Buffalo, New York where to the ground which caused him to crack his head on the concrete and bleed from his ear immediately. Police initially reported that he tripped and fell but the video evidence was damning and the officers involved were arrested on assault charges and suspended without pay.

Now TMZ is reporting things could look uglier for the two officers involved in the assault as Gugino’s attorney, Kelly Zarcone says that not only did Gugino suffer a fractured skull, but now he can barely walk a few feet due to injuries.

She added that Martin is unable to get up on his own 2 feet for the time being while he recuperates. He was released from ICU last week, but remains hospitalized.

Zarcone also released a statement directly from Martin, who says … “I think it’s very unnecessary to focus on me. There are plenty of other things to think about besides me.”

The statement shouldn’t surprise anyone paying attention as this is the same man who responded to Donald Trump’s false claim that he was an “ANTIFA provocateur” by simply saying “Black lives matter” as he was discharged from the hospital.

We like this man. We hope he sues the Buffalo Police Department for every penny possible. Just sayin.’

The video of Gugino being assaulted by Buffalo PD outraged social media and fellow protestors as the graphic injury was on display for all to see. To make matters worse police pulled one of their own off the Gugino when he seemingly went to check on the elderly man while he was bleeding on the ground, once again showcasing how far police will go to absolve themselves of any responsibility.

In response to the suspension that both officers Aaron Torgalski and Robert Mccabe received for their transgression, 57 fellow officers resigned from Buffalo PD’s Emergency Response team in a show of blue wall solidarity. Calls have been made for those officers to be fired entirely from the force but they have fallen on death ears.