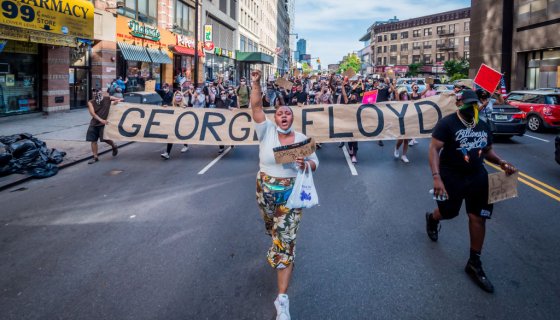 As around the nation continue to crop up in support of Black lives, a scene in Buffalo, N.Y. has illustrated what Black Americans have been saying about police brutality. After an elderly white man was shoved viciously to the ground and seriously injured Thursday evening (June 4), the suddenness of action and outrage clearly depicts that more work needs to be done.

As reported initially by WBFO, a protest that took place at Buffalo’s Niagara Square in front of the City Hall was ongoing shorty after a curfew went into effect. The man, identified by The Buffalo News as 75-year-old peace activist Martin Gugino, is seen on the video where he approached the officers in a non-aggressive manner and was shoved hard to the ground, hitting his head, and was not given medical aid by other officers who casually strolled by.

The outcry of police brutality came far swifter than it has for Black Americans and other people of color who have suffered similar instances and the impassioned pleas from some white commentators illustrated that glaring disparity. That same outrage is very dissimilar in regards to Dounya Zayer after she was shoved hard to the ground in one of the more disturbing videos to emerge from the protests.

Stop making excuses for the police. They are supposed to be protecting us. Not hurting us. pic.twitter.com/SoYtWMxIMh

Zayer, who is a woman of color, has aimed her energy towards healing and continuing to call for action to be taken towards the officer who shoved her. But here’s what’s telling. People were claiming that Zayer spat on the officer and was motioning towards him. It is clear in videos that have been shared on social media that she was not doing any of the above.

We bring this up not to take away from the terrible pain that Gugino must be in at the moment, but to highlight that the fact the two Buffalo officers were immediately suspended without pay while the officer who shoved Zayer is still free to administer his dangerous brand of law enforcement.

If it took Martin Gugino for white people to suddenly get why Black Americans are fed up at the mistreatment we suffer, then that’s clearly part of the problem right there. Some of them won’t understand until their own experiences of the pain Black people endure happens to one of their own. We’d rather see white people who claim to be allies step up and support Black lives as equally as they would any other American that has been saddled by injustice.

According to The Buffalo News, Gugino is currently hospitalized in serious condition and because we don’t lack compassion, we hope that he heals in good time. That still doesn’t excuse the fact that Black people have been catching hell from police officers left and right and it’s time America stands in the glaring light that very true fact.

The video of Martin Gugino being shoved to the ground can be viewed below and we must warn you that the images within may be disturbing to some.