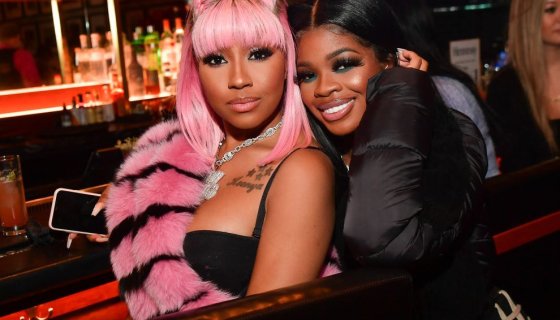 Sometimes things go viral on Twitter by way of a lot of moving parts, and this latest trending topic to go nuts is no different. An older gentleman hopped on his daughter’s TikTok to play a guessing game, leading to him referring to the as the gospel-singing duo, Mary Mary with hilarious results.

TikTok and Twitter user @MiaJWil shared a video of “Name That Celebrity: Female Rapper Edition” with her showing images of women of Hip-Hop. While the man did guess Missy Elliott and Lil’ Kim correctly, he really arrived at a place few expected when his daughter showed him an image of JT and Yung Miami’s Billboard cover shoot with the pair standing next to each other adjoined by braids.

To the man’s credit, the image is somewhat similar to a cover shoot Mary Mary did with the same braid-linking pose and stance. That said, fans of the singers and rappers alike are having a field day sharing jokes, laughter, and even a touch of shock at the man comparing the raunchy wordsmiths next to the veteran vocalists.

With Mary Mary trending, even @MiaJWil couldn’t believe that her father’s quips went viral and shared the news with her followers on Twitter.

THE FACT THAT MY DAD HAS MARY MARY TRENDING I-💀💀💀 pic.twitter.com/BrLv55vYpZ

This might be a good time to see about the two duos to collaborate on something, right? Well, come to think of it, it might not be a good fit considering but one can dream.

We’ve scoured the social media network and collected some of the funniest and over the top responses below.

Lol This is why he thought it was Mary Mary pic.twitter.com/6dYWV5OBqA

He said City Girlz was MARY MARY 😂😩😭 “take the shackles off my feet so I can scam” https://t.co/uobM1tWHGT

Just saw why Mary Mary was trending immediately thought of this😭 pic.twitter.com/wOclVRAFUP

This man on tik tok thought the City Girls was Mary Mary…MARY MARY AS IN THE GOSPEL DUO. I AM CHOKING pic.twitter.com/VW46rqX0Jk

This has to be the funniest nigga on TikTok pic.twitter.com/Q3lMqnNj1Q

Mary Mary vs. City girls in hits for hits battle who winning 😂 pic.twitter.com/Zh0xDXTdvK

I thought Mary Mary was trending cause they had a new song out. Come to find out… pic.twitter.com/v3zLzk9Ry0

When Mary Mary said, "Where the bag at nigga where the bag at," they were preparing for the role of tax collector in the story of Jesus.

Me after finding out why Mary Mary is trending. Got me all excited for nothin lol pic.twitter.com/A2iWcBU4dU

I love that Mary Mary is trending. Like, I love it so much. But I really wish it was because they just dropped new music… pic.twitter.com/dVUydLSGCD

Me after finding out the reason Mary Mary is trending pic.twitter.com/VVQ00rW07W

Not Mary Mary trending bc he thought that was the City Girlz pic.twitter.com/J2X3fZoFqH