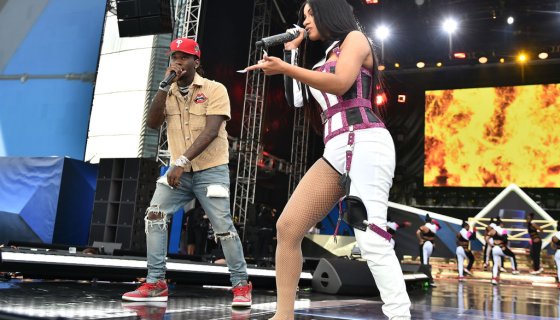 Offset just had the law in Los Angeles this week and now has another potential legal situation on his hands during a wild night in Miami. Joined with his wife at a strip club, the Migos rapper attempted to get it shaking after an unwelcome champagne shower hit his lady.

TMZ reports that Cardi B and Offset were partying at Booby Trap On The River in Miami where Cardi also performed a set for the crowd in attendance. Apparently, a man took a shaken bottle of champagne and began spraying the crowd with some getting on Cardi, who was standing on stage next to a pole with her husband flanking her.

Upset by getting splashed reportedly, Offset went off to defend his lady’s honor and threw several punches at the man and allegedly landing one before security settled things down. According to the outlet, Offset and Cardi B jetted shortly after.

Check out the wild footage of Offset handing out a strip club fade below.