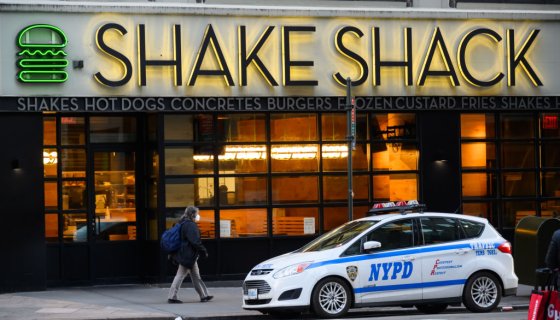 The animosity towards police officers has reached a fever pitch in 2020 thanks to the and more recently , so when some police officers became sick after chowing down at a Shake Shack in New York City, some people were quick to assume some sort of foul play was involved. It was not.

According to 1010 Wins on Monday night (June 15) three officers fell ill after downing some milkshakes they purchased at Shake Shack in the Fulton Center in Lower Manhattan and ended up getting hospitalized as they believed their shakes were laced with a “toxic substance believed to be bleach.”

Shake Shack was taken aback by the news and immediately tweeted their concern over the situation and their cooperation with authorities to get to the bottom of the matter.

We are horrified by the reports of police officers injured at our 200 Broadway Shack in Manhattan. We are working with the police in their investigation right now.

But after an investigation into the matter Shake Shack employees were cleared of any “criminality” and the incident was summed up to being human error as the milkshake machine wasn’t thoroughly cleansed which allowed some bleach to remain in the machinery.

After a thorough investigation by the NYPD’s Manhattan South investigators, it has been determined that there was no criminality by shake shack’s employees.

After the incident was reported many jumped to the conclusion that Shake Shack employees purposely poisoned the officers but ultimately it turns out everything was just some bad luck for the boys in blue.

Our team is working hard to get the full picture. In the meantime, we’re relieved to hear the officers are all okay. https://t.co/rjJYFSYjZc

But of course skeptics are upset with what transpired and are now vowing to never return to the establishment while referring to employees as terrorists because, well, who knows. Others expressed their skepticism that police were actually sickened as no one else seems to have had a problem with their wisked dairy orders. Maybe these cops were taking Trump’s advice and were trying to protect themselves from the Coronavirus by ingesting bleach and instead of taking the blame and looking like complete fools decided to throw the blame on Shake Shack? You never know these days.

Peep some of the reactions below and let us know if you think police were actually sick or whether they were just trying to play the victim card.

Instead of making statements like you're "horrfied" what you SHOULD be doing is releasing the footage of the terrorists that committed the crime!

Don’t care. I’ll never visit a shake shake. If this was a mistake, even worse. It could be me next so I’ll avoid your stores for like the rest of my life.

It’s funny that no other customers were sick, just the officers. I call BS these cops are full of it

Really? Somehow an “accident” only happened to #NYPD officers and no other customers have been reported. pic.twitter.com/CliNEZAJT4

The full picture is that the union, as always, jumped the gun and accused your employees of premeditated murder while the actual investigation was ongoing. Sue them for libel.

Sue them. The pigs (along with Trump supporters) wanna be victims so bad!