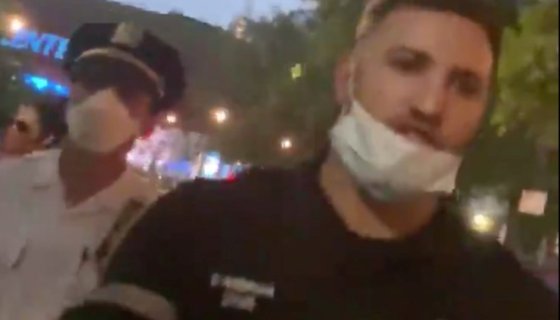 One of the most ironic things about the is the amount of police brutality captured on tape at these protests.

While some cops have been reprimanded in some way, shape or form, others have found themselves facing actual charges and according to the Goth

amist, another police officer who crossed the line is about to go through the judicial process himself. Today (June 9) Brooklyn District Attorney Eric Gonzalez announced that Officer Vincent D’Andraia is facing charges of third-degree assault, fourth-degree criminal mischief, second-degree harassment, and third-degree menacing for shoving a peaceful protestor to the ground and causing her to sustain head and neck injuries as a result.

D’Andraia is the first police officer to actually get his with criminal charges for his misconduct during the protest demonstrations that have been taking place across the nation in the wake of the murder of George Floyd at the hands of Minneapolis police officers. The incident occurred last Friday night when the overzealous officer was caught on video smacking a phone out the hand of 20-year-old Dounya Zayer before violently shoving her to the ground where she hit her head on the concrete and ended up hospitalized for a few days.

Okay since everyone is asking what exactly happened: so we were protesting at pacific street and then the police started hurdling towards us and pushing us forward at the same time they were pushing protesters to the sidewalk but the officer in the video didn’t seem to give a single fuck pushes this poor girl so freaking hard ending up hitting her head hard on the ground, she started saying that she might have a concussion and was feeling really dizzy and said that she has a history with seizures, after that we put her on the side and gave her some water and crackers and then everyone left but me and my friends we wanted to make sure she’s totally fine and able to stand up until out of nowhere she was looking at me and had a seizure, while I was holding her on the staircase I was yelling on the top my lungs MEDIC MEDIC they ended up coming after 5 min of calling and that was it. #blacklivesmatter #nypd #cnn #policebrutality #georgefloyd #nycprotest #nycprotests #nyc #brooklyn #justiceforgeorgefloyd #blacklivesmatter✊🏾 #ftp #solidarity #barclayscenter #protest #violence #america #thisisamerica #brooklynprotest #cuomo @cnn @nycmayor @nygovcuomo @nypd @nypdtips @dounyazayer

Needless to say the video caused an uproar. Police claimed that Zayer was in the way and she refused to move when told to, but in the video she posted of her own incident you can see she was barely given a chance to comply when officer D’Andraia put his hands on her.

This is the officer. He threw my phone before throwing me. As you can see I was already backing up. All I asked was why. pic.twitter.com/8mct5GrztV

After the incident Zayer says she suffered a seizure and has a concussion to boot.

Once the video began to make the rounds on social media, NYPD Commissioner Dermont Shea suspended D’Andraia without pay while his supervisor who was present during the assault was reassigned for failure to, well, supervise.

Vincent D’Andraia is expected to be arraigned today in Brooklyn Criminal Court where he’ll probably get a heroes welcome from fellow NYPD officers. Seems like that’s becoming a new thing lately.