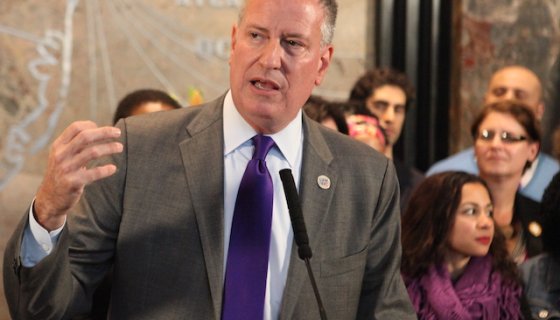 What’s the best way to troll a racist real estate “tycoon” turned Divider-In-Chief? Why, you paint “” in front of his 58 floor skyscraper of course!

According to the New York Daily News, New York City Mayor Bill de Blasio has greenlit the painting of “Black Lives Matter” in giant yellow letters in front of Trump Tower on Fifth Ave between 56th and 57th streets in Midtown Manhattan and Cheeto Jesus is cursing the heavens for the move. After news of the sign being painted in front of his property broke, Donald Trump took to Twitter to blast the move but instead of admitting that it bothered him personally he projected his anger unto the officers of the NYPD.

While police officers have been caught on tape blasting the Black Lives Matter protests and even fantasizing about a racial civil war, we haven’t heard any cops upset about having the sign painted in front of Trump Tower nor in Brooklyn a few weeks ago. As a matter of fact, Donald Trump didn’t weigh in on the . We wonder why?

The Racist-In-Chief has already referred to the movement “Treason, Sedition” and “Insurrection!” as he has a problem with BLM demanding systematic change for Black Americans. Can you imagine what he calls Black lives behind closed doors amongst his white nationalist administration?

Still, Mayor Bill de Blasio was unfazed by the “president”‘s tweeting tantrum and clapped back that Donnie’s “warped” mind and stated “Nobody’s surprised that makes you uncomfortable.”

It’s a movement to recognize and protect the lives of Black people.

Maybe Donald Trump wouldn’t be as mad if the letters were in orange instead of yellow?

Regardless of how hurt he may be, the city will move forward with the project and also plans on adding murals on Centre St. in downtown Manhattan and Adam Clayton Powell Blvd. in Harlem.