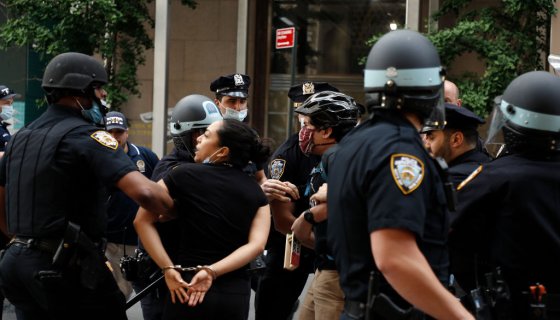 Over the past few months New York City Mayor, ‘s been subject to much criticism mainly due to his response to the Coronavirus pandemic and ultimately his defense of police brutality during the George Floyd protests in Brooklyn.

Now The New York Post is reporting that the embattled mayor’s own daughter, Chiara de Blasio, has found herself in handcuffs due to her participation in a protest group that was blocking a roadway and allegedly throwing objects at police officers. According to the report the 25-year-old was taken into custody at 10:30pm this past Saturday night for what police say was unlawful assembly at 12th Street and Broadway in Lower Manhattan.

“That was a real hotspot, police cars were getting burned there, people were throwing and yelling, fighting with cops. There were thousands of people in that area at that time,” the source said.

Chiara gave a residence on East End Avenue as her address — otherwise known as Gracie Mansion, the mayor’s Upper East Side home. But she didn’t tell cops she was the mayor’s daughter.

Props to her for not playing that “do you know who my father is?” card that many uppity kids would’ve played as soon as those handcuffs were slapped on their wrists. Luckily for her she was given a desk appearance ticket as her “offense” wasn’t that serious.
Though City Hall refused to comment on the matter, we’re sure that the de Blasio household is an awkward environment right now as the mayor had called for people to go home just an hour after his daughter found herself bagged by police for refusing to move when she was told to.

“We appreciate and respect all peaceful protests, but now it is time for people to go home,” de Blasio said at a press conference at 11:30 p.m. at the NYC Emergency Management headquarters in Downtown Brooklyn.

“If you went out peacefully to make a point about the need for change, you have been heard and change is coming in the city. I have no doubt about that. It’s time to go home so we can all move forward.”

Yeah, that didn’t really resonate with anyone. Nice try though.