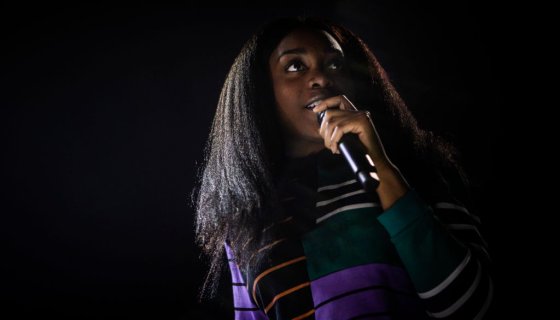 First things first, we are stopping short of calling the and situation a beef, although it can certainly be categorized as such. With the North Carolina rapper firing the first salvo with “Snow On Tha Bluff,” the Chicago rapper and activist returned fire with “Song 33” and addressed Cole with surgical precision while still centering Black liberation.

In the wake of long-deleted tweets, Noname called out rappers for not using their massive followings and platforms to call for reform and change. Most readily assumed the tweets were aimed at Cole and Kendrick Lamar and that theory may have been what sparked Cole to record his recent drop. While Cole never mentions Noname in the track, his clarification statement on Twitter cleared up any confusion and, in some circles, didn’t do him any favors.

For the past day or so, fans on Twitter have been both slamming Cole for, to paraphrase, police Noname’s tone as she continues to rally the troops while some said it could be the start of a conversation. If a response is what Cole wanted, then he got one that gave him a bit of the smoke but not an all-out spanking as some might portray, with Noname sounding right at home over the Madlib production.

But n*ggas in the back quiet as a church mouse/Basement studio when duty calls to get the verse out/I guess the ego hurt now/It’s time to go to work, wow, look at him go/He really ’bout to write about me when the world is in smokes?/When it’s people in trees?/When George was beggin’ for his mother saying he couldn’t breathe/You thought to write about me?

The brief affair is over before it gets started, but not without Noname making certain to make mention of the tragic death of 19-year-old Oluwatoyin Salau, and the disturbing number of transwomen who have been violently killed as well.

On Twitter, Noname is currently trending with many declaring this a closed case. In a perfect world, this will be a spark for change in J. Cole to do the reading he admitted not to doing in his clarification statement and perhaps collaborating with Noname for something that truly benefits the whole.

noname responsed to the misogyny and of course niggas gone double down on the misogyny. We know how it go.

Noname has some of the best one liners in the game.

So J Cole defends himself, admits he didn’t do enough, and called her a queen in his song and gets called a misogynist. NoName makes a diss on J Cole and is getting praised. Make it make sense pic.twitter.com/1q6Vthtpfi

The thing that makes it so much more brutal is that NoName has the voice of dew on a single leaf after a rainy morning, and she used it to express her disappointment in this man https://t.co/WPPO7s0r0N

NoName didn’t even say no names with her tweet. Hit dog hollered and she ain’t back down.

"i guess the ego hurt now. time to go to work, wow, look at him go! he really bout to write about me when the world is in smoke?" COME ON @NONAME

All J.Cole did was give Noname free promo and a new audience lmfao. Men are dumb.

noname literally tried to shift the focus of the conversation back to the problems we face and yall niggas talking about "she can't go bar for bar" i- pic.twitter.com/EfJZtmY9S9

y’all the only ones beefing now, even j cole and noname have moved on lol.

NoName dropped and now people saying, “this isn’t the time….”. Where was that energy a couple days ago? Hush your lip. Lmao

“Why Toyin body don’t embody all the life she wanted?” — @noname

Just got my noname stan membership card in the mail

The real difference to me between Noname’s track vs Cole’s is, as expected, she’s demonstrating an awareness of the movement we’re in, in this moment. It actually just makes his song even more disappointing.