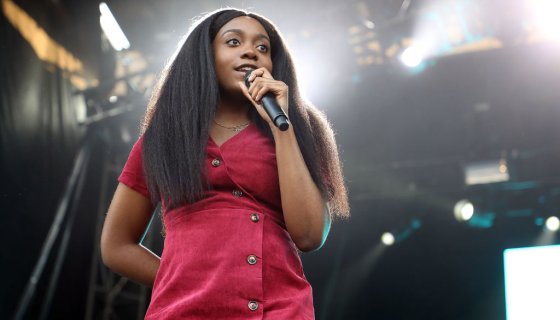 The rift between J. Cole and Noname ended with a bang after the Chicago rapper checked her North Carolina elder’s with her track. Via Twitter, Noname expressed what appeared to be regret over releasing the track, framing it as a “distraction” while other issues are looming.

“i’ve been thinking a lot about it and i am not proud of myself for responding with song 33. i tried to use it as a moment to draw attention back to the issues i care about but i didn’t have to respond. my ego got the best of me. i apologize for any further distraction this caused,” began Noname’s tweet on Sunday (June 21).

She added, “madlib killed that beat and i see there’s a lot of people that resonate with the words so i’m leaving it up but i’ll be donating my portion of the songs earnings to various mutual aid funds. black radical unity.”

Cole’s “Snow On Tha Bluff” was the first blow thrown and was who felt that the rapper was trying to police Noname’s tone along with some misogynistic undertones. On the Madlib-produced “Song 33,” Noname gave Cole some sharp, hard-hitting bars with J. Cole actually sharing the track to his fans.

Because some observers felt both rappers want the same liberation and justice for Black people, many thought that this so-called beef could derail all of the progression of late considering how split people have been in times past. Of course, Cole’s passionate fanbase seemingly egged on the situation, and they’re probably responsible for getting him riled up as well.

In a long-deleted tweet, Noname had a touch of smoke for rappers who, in her words, “whole discographies be about black plight and they no where to be found.”

Eagle-eyed fans took those words to be aimed at Cole and his past collaborator Kendrick Lamar, both of whom took to the streets in protest in North Carolina and California respectively.

Noname’s tweet related to “Song 33” garnered a bevy of responses from Black Twitter, most of them saying she was well within her rights to respond to Cole as she did. Of course, the stans have also found a reason to use this as some sort of admittance of defeat, which would be an incorrect assumption on even the most liberal scorecards.

In all, the two songs highlight that conversations and actions still need to be at the front of the movement.

Check out the reactions, which cover all sides, below.

I feel like you're good with nothing to apologize for. https://t.co/DeZHjIIFON

Not a distraction. You delivered nuanced bars to a guy who let his love of patriarchy cloud HIS creativity into tone policing & egging on his ist fans without ever checking them (which is how his rhyme COULDVE BEEN useful). You did what you had to do.

We needed that song. Movements need justice music. Thank you for being you, fam! 🖤🖤🖤🖤🖤

The only person that should be apologizing is J Cole.

nah. It was a good and important response. Are there ways to critique and improve? Always, that is the dialectical nature of things. But you responded by recentering real issues, rather than letting an anti-intellectual and misogynistic song stand unanswered on its own weight.

Seriously tho- i don’t think it’s unimportant work to highlight the ism that plagues our movements. It hindered the panthers, & it is a factor now. I’m thankful for song 33 bc it’s given me the opportunity to show BM when they are acting like wight ppl.

You are amazing and so is @JColeNC I think you two should sit down and have a face to face conversation on how to move forward from here.

love to know how reflective and thoughtful you are! we really appreciated your words and sentiments and bringing the spotlight to the most marginalized of people. solidarity!!!

You did what you did because you’re human, and you can reflect on your motivations because you have principles. It wasn’t a distraction and made a lot of us feel affirmed and vindicated. So as always, thank you 🤎

Not a distraction at all. We as women are socialized to minimize ourselves- to apologize for everything. As Black women, to not exist. You are not a distraction. Your music, words, and RAISING YOUR VOICE is EXACTLY the example needed. Hold your head up tall. Be proud.

You did what you had to do. It wasn't a distraction at all but a reminder of the work that you are putting in and yet still needs to be done. 🌹

At least he said something positive about noname. Noname is just dissing rappers likr j cole and kendrick, which have been making music about police brutality and racism way before this. J cole goes out and protests and noname complains about him not tweeting a black screen

You did what you could in your realm of creativity. We don’t all revolutionize the same. I thank you for the song, truly and thank you for donating the funds.

It was actually in sync symbolically, in not allowing yourself to be policed by an idea that supposed “leaders” are always looking to BW to “teach” them and instead you spoke to where the focus needs to be and that’s not always centering a cishet BM. You are supported. pic.twitter.com/KRbjZIQ2DD

your public vulnerability in itself is revolutionary. you got many unengaged to tune in and there’s a lot of power in that. recokening on how to use your power to me is modeling moral leadership.

it was hard doe 👀

i get where you’re coming from with this, but i don’t think you should be too hard on yourself. you started a hard, but necessary conversation among ppl who have been avoiding them way too long

When I heard your song it made me realize that black men need to step up more. We on both sides have a lot of work to do. But you said how you feel and sometimes as men we need a reality check. Growth is not pretty or nice all the time. Keep rising queen.

You let Twitter folk deceived you thinking Cole got no love for you. Apology accepted! We move

Noname and J. Cole both acknowledged they could have handled things differently. The whole Twitter beef was blown out of proportion by people with ulterior motives — Let's get back to handling our differences like adults and not children. Thanks