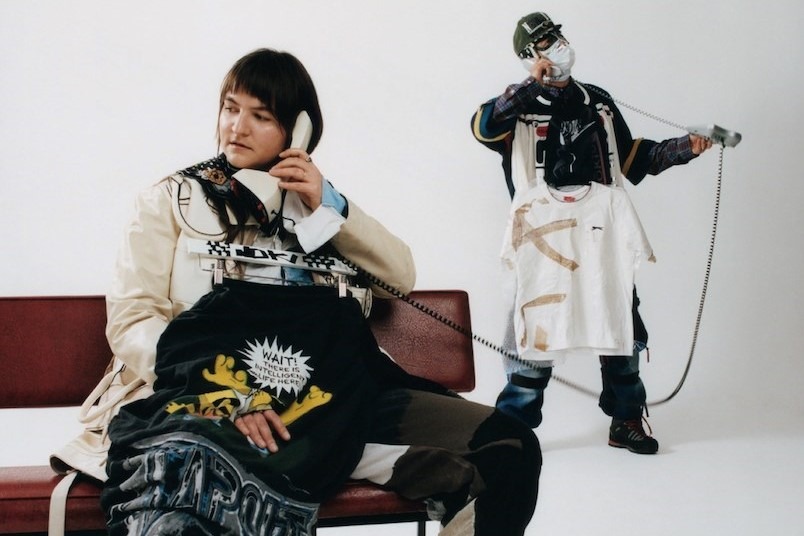 A foundational figure on the London fashion scene, NOKI is funnelling his lawlessness and legacy into NOKI NESTT

It’s 9am on a Tuesday morning and JJ Hudson has been talking about the apocalypse for the best part of ten minutes. “I’ve been preparing for it for years,” he says. “Actually, I used to describe what I do as ‘Bunker Love’ because if we all end up in a bunker the one thing I will enjoy myself doing is custom building stuff to wear while we’re stuck down there. That’s if we even make the bunker.” Otherwise known as NOKI, the king of Shoreditch, or the father of mash-up, Hudson has cut a strange figure within fashion ever since he arrived in London in the late 90s, his face completely obscured by a rotation of poke-hole masks.

Sitting front row at shows, he almost looks as though someone has cast a spell on a clothing bank, granting a jumble of secondhand fashion the ability to move and emote. His own creations, forged from scraps, rags, and bits of old clothes are inspired by the anarchism of hardcore, and present a challenge to form that continues to inspire designers today. Conner Ives, BUZIGAHILL, and Balenciaga are all indebted to Hudson’s violent twisting of consumerism, where sustainability and bootleg collaborations have been central to his practice. “I suppose it has just validated this crazy thing that happened in the 90s,” he says. And yet despite his impact on fashion, he is loath to call himself a designer, asking to be referred to, exclusively, as a textile artist.

Harry Styles has taken over Gucci

Having come up alongside Judy Blame, Lulu Kennedy, and the YBAs back when Shoreditch was little more than a barren wasteland, Hudson played a foundational role in transforming east London into a creative honeypot, before working as a stylist for MTV and teaching at some of the capital’s most noted fashion schools. “As a gay man I don’t have children but I have thousands of students who are like my kids,” he adds. Though he has acted as a mentor for years, his next step is to formalise a “real deal” fashion school, dubbed NOKI NESTT. “It wasn’t just about the technique of customising clothes, it was spiritual, too,” says former student Nurse Naoya, who discovered NOKI in a Harajuku boutique 18 years ago. “What impressed me was that JJ always asked me if I was happy. I found that similar to the teachings of  Buddhism, which may sound exaggerated but, for me, NOKI is Buddha. NOKI is God.”

“I want to be able to harness my legacy,” Hudson says, a fact corroborated by his upcoming exhibition with Jamie Reid at Rodhus Studios in Brighton. “He’s the punk godfather of collage and we’ve both fucked with new systems. My art is finally starting to be recognised. The fashion industry bastardised it as clothing but it was never just clothing. It was about a freedom uniform.” Below, we sit down with JJ Hudson to discuss the dangers of nostalgia, the legacy of AIDS, and his plans to create a fashion school quite unlike any other.

Hey Jonathan! How are you?

JJ Hudson: Please don’t call me Jonathan. JJ or NOKI is fine, only my mum and bank manager call me Jonathan, it’s very strange. The whole JJ thing actually started when I was at art school in Edinburgh because my friend Margarita was drunk and just started calling me that. I was like ‘you can call me what you like’ because I had been bullied to fuck and called all sorts by that point. JJ kicked in and my life changed. So what I’m trying to say is it’s been a crazy 30 years and I’m obsessed with branding.

Apologies. How was Aberdeen back then?

JJ Hudson: It was the 80s, my brother was the Kingpin of punk, and I was his sidekick. He was a Psychobilly so had a bleached blonde flattop. He was the Billy Idol of Aberdeen while I was this geeky kid with big ears and an odd face. Obviously queer as well but I didn’t know that then. I was looked after by his thousands of girlfriends, they were my guardian angels. So I had an amazing upbringing sneaking into all the hardcore clubs.

Is that where all your anarchism comes from?

JJ Hudson: I was enthralled by style – seeing clothing that had been ripped and torn from the pulling and shoving of a mosh pit. I think that’s where NOKI comes from, knowing what’s on the verge of acceptability and authenticity, because there’s an awful lot of fakes out there, especially now. It’s not necessarily anyone’s fault, it’s part of a generation that are gagging on nostalgia because they’re terrified of the future. One of my students is 19 and he came to me buying Supreme skateboards even though he couldn’t skate. He’d dress like a 70s crooner so I told him to take his flares and mash them up with a jogging bottom.

What’s so wrong with nostalgia?

JJ Hudson: It’s melancholy. Don’t copy what the past gave you because that’s costume, not fashion. If you’re not breaking rules it’s not cool. People used to be disgusted at the sight of long hair, flares, and tight leather jackets. Those people weren’t accepted, they had to be part of some kind of disgusting cultural change. I want to be able to speak truth with my students and one solution I offer is through mashing-up clothes, because you’re creating a narrative change. That’s how I see my custom builds: soft sculpture, collage, and dadaism. It tries to make sense of life as a jumbled-up mess.

Does that help explain why you started NOKI NESTT?

JJ Hudson: Students have been coming to me for years, having seen my work in shops or otherwise parodied throughout the industry. They wanted to go to the source to learn how to custom build custom garments NOKI-style. And then lockdown was a time of major reflection. The apocalyptic film was kicking in and we were stuck doing jigsaws indoors. And I had kind of been preparing for this for years. Even in the 80s we were living through the AIDs crisis and the Cold War. I used to call my work ‘Bunker Love’ because if we all end up in a bunker one thing I will enjoy myself doing is creating stuff to wear while we’re stuck down there… that’s if we even make the bunker. That’s why I set the school up.

You were one of – if not the first – to make spliced and diced upcycling your brand. How does it feel to see so many other designers taking cues from that now?

JJ Hudson: It’s mental. I’ve been doing Gucci x adidas or MM6 x The North Face for decades and I suppose all these mash-ups have just validated this crazy thing that happened with me in the 90s. From around 1996 to 2000 I was in heaven because nobody understood what I was doing. People would be like ‘What’s your problem? Why are you splicing all these brands together?’ But I’m a raver and that was my uniform. I didn’t just want to wear Nike or Fila, I wanted them to be chopped-up and made into this fucking hybrid piece of armour. I’d do things like blank the letters out of an adidas t-shirt so that it read ‘AIDS’. It meant the brand wasn’t just another corporation at the rave but it was adveritising a safe sex campaign. That was quite sacrilegious, actually, because it was an emotionally terrifying time. Do you know my story about AIDs?

I don’t, what happened?

JJ Hudson: As I said, branding has always been my thing. In the 80s, there was this actor called Rock Hudson, he was the epitome of masculinity but he happened to be in the closet. I shared his last name so when he died of AIDs I was bullied relentlessly. At 13 I became the disgusting homo kid, I was outed, and I couldn’t escape that. It was like being branded in the worst possible way.

Do you think those experiences have informed your anonymity?

JJ Hudson: You mean the mask? That came about because I was famous in Shoreditch, which was a lawless village back in the early 00s. Seriously, if you wanted to eat you had to buy a Ginsters from a garage. It was that barren, a real no-go zone. I opened The Bricklayers Arms when I was just some fresh kid and it quickly became a mecca. That’s how I met the coolest of the cool, like Lulu Kennedy, who I worked with on Fashion East in 2008, she was a punter at the bar.

Popularity isn’t necessarily a positive thing, though, and the mask went on because I didn’t want anyone coming near me. So people had to work out what they liked about this freak (me) and why they wanted to stick by him. The mask is more important than ever now because our anonymity has been strpiped from us thanks to social media. I still wear it in public as a way to advertise my art because I’m just a lad from Aberdeen that probably has PTSD from the 80s and I’m still dealing with all of that. It was terrifying. I still think I have AIDs. If I get a cold or a sniff I immediately think I’ve got it. And that’s part of branding.

Is the NESTT about reinstating the melting pot vibe of early Shoreditch?

JJ Hudson: It’s about creating a new school out of the old school, yeah. As a gay man I don’t have children but I have thousands of students who are like my kids. I used to teach at Ravensbourne and Kingston, and even though I would often think ‘‘why am I here?’, I was brought in so that the kids could observe street-oriented creativity. That’s when I started Fashion Monster, a course I’ve taught all over the world, which challenges students to drag clothing out of landfills and create a monster. It’s about facing our fears, our need for dopamine, and shopping, and consumerism. There’s still a need for that, and I want to be able to harness my legacy through it. The end game is to get funding for a proper school where sustainability can be for real. Somewhere students can learn, sell their pieces via the studio, and show at fashion weeks. That’s what the NESTT is – a harnessing of a legacy.