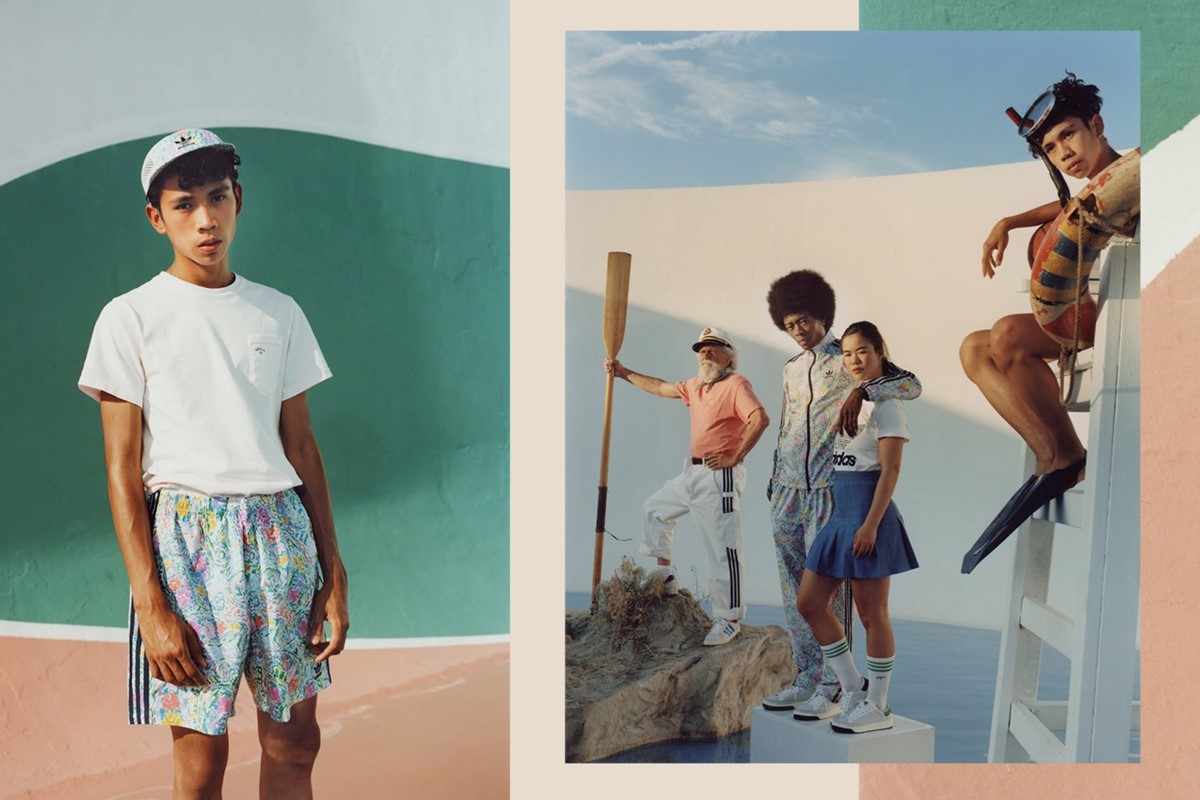 As far as streetwear pedigree goes, Noah’s Brendon Babenzien is something approaching royalty. Beginning his career at Pervert, the highly influential and since disbanded Miami store, Babenzien went on to become the creative director of Supreme. Following a 15 year tenure at what remains one of the world’s most iconic brands, during which time he helped turn streetwear into a global phenomenon, Brendon left to set up Noah in 2015. Based out of its flagship store in New York, the brand has become widely acclaimed for its high quality, durable workwear (although that’s not a term you’ll catch Brendon using). Sometimes Noah’s products have a nautical inflection, sometimes they are adorned with subversive slogans, but what remains consistent is an emphasis on ethical design and sustainable consumption. A vocal critic of fast fashion and rampant consumerism, Babenzien is the rare company head who wants you to buy less stuff.

Noah’s collaboration with adidas is a fitting one, in that both brands share a strong connection with the ocean. Having grown up by the South Shore of Long Island, Brendon’s work has always been influenced by surf culture and nautical themes. adidas, meanwhile, has become renowned for its various initiatives aimed at tackling plastic pollution in the ocean. As part of its ‘Run for the Oceans’ campaign, an annual event now in its fourth year which brings together millions of participants from across the globe, adidas will clean up the equivalent of ten plastic bottles for every kilometre ran. This shared passion comes to life in their new collaboration.  With its shell motifs and Navy blues and whites, it looks like it could be pulled from a streetwear remake of Wes Anderson’s The Life Aquatic – in a good way. I caught up with Brendon, along with his wife and co-owner Estelle Bailey-Babenzien, to talk about the collection, and how it fits into Noah’s wider vision.

How did your collaboration with adidas come about?

Brendon Babenzien: adidas has always been one of the brands that I gravitated towards. From that point of view, it was easy to consider working with them. But additionally, eight or ten years ago, they were part of an environmental conversation that I attended at the United Nations, where they were previewing a new concept that they had: shoes made with recycled plastics waste, intercepted on remote islands, beaches, coastal communities and shorelines. I thought that was really progressive and something that one day I wanted to be a part of. When the opportunity came around, that was a big part of why we wanted to work with them.

Noah is usually thought of as a streetwear or workwear brand, whereas this collab is introducing more of a sportswear element. Do you see those categories as being distinct entities?

Brendon Babenzien: The language of clothing is kind of irrelevant for me. I’ve never been a fan of this idea that they live in certain spaces where they need to have certain names. It just doesn’t make sense and I think it’s incredibly limited, so we don’t really think in those terms. We never thought of ourselves as a streetwear brand or a sportswear brand. We’re just going to make, to the best of our ability, really nice things for people.

When designing this collection, did you have to consider the more technical, performance-related aspects of creating sportswear?

Brendon Babenzien: Particularly working with a brand like adidas, if it’s going to be considered technical then it has to pass certain standards of testing. What we’re doing isn’t really intended for sport in the true sense, so it doesn’t need to have the exact same standards. But to be fair, much of the population doesn’t really need some of what is offered to them these days in terms of the technical aspect of clothing. Most of us, even if we’re pretty serious about sport, don’t need the highest level of performance.

“We never thought of ourselves as a streetwear brand or a sportswear brand. We’re just going to make, to the best of our ability, really nice things for people” – Brendon Babenzien

Ethical design is a big part of the story of Noah. What does that term mean to you?

Brendon Babenzien: Our view is just that businesses should strive to operate as responsibly as possible. In the case of Noah, that’s really not easy to do because we’re small and we don’t have tremendous resources. The first and most important thing was that we wanted to make a product that would last a long time. That was one area where we really wanted to strive to be better than the average clothing brand.

Throughout your career, you’ve been critical of rampant consumerism. What do you think is the answer to this? People buying less stuff but higher quality?

Brendon Babenzien: ”Yes” is the easy answer, however I’m aware of the fact that not everybody can afford to buy the best of everything. There was a time when that might have been more possible, but at least in the States and I think most of the Western world, we gave that up for cheaper stuff. Do I think people should be avoiding fast fashion? Personally, yes. But that’s coming from a place of luxury, right? The problem is really how we got here. As a society, we just wanted people to buy more stuff. That was the goal, and we altered people’s perceptions of what is important. We all got convinced that we have to have everything: the newest sneakers, the newest jacket, the newest car, the newest house. We changed our value structure to accommodate the idea that having more made us better. It’s kind of a sick thing when you think about it.

How do you think we can change these attitudes to consumption? And do you see Noah as being a part of that charge?

Brendon Babenzien: Our target is to remind people that style is more important than fashion.

How would you define the distinction between “style” and “fashion”?

Brendon Babenzien: Style is the ability to take just about anything around you and make it work. It’s confidence in yourself, and an ability to just wear jeans and a shirt and still be the best looking person in the crowd. Whereas there are people who have all the money in the world, buy the latest everything and have an outfit worth $10,000, but still don’t look particularly good. The reference I often use to explain it is skateboarding, and, for lack of a better word, hip hop and b-boy culture. In the early days of these two subcultures, there really weren’t industries built around them supplying them with products. Skaters were mostly wearing surf stuff and they didn’t necessarily have to spend loads of money to do it. I would argue the same thing happened within B-boy culture: it was about taking things which were already in existence, whether workwear, sportswear, or team jerseys, and just putting them together in a way that they did something fresh. That had more to do with innate creativity and style than it did with the latest trends.

Do you think that kind of counter-culture still exists today?

Brendon Babenzien: I believe innately that there’s always a subculture. One example I like to hold up as my shining star of hope is the resurgence of vinyl. Fifteen or twenty years ago, people said vinyl was dead forever and never coming back. But it did, because there’s a quality to it that really stands up. It’s a fun process to take a record out, hold the cover, and read the liner notes – all of those things create more of a connection to music than just popping it onto your headphones. I’m always looking for those moments where you slow down and really, truly experience something. Do we need to experience everything all the time? Why don’t you find the things you love and really immerse yourself in them?

The collection is avaliable to buy from selected regions on adidas’ website.