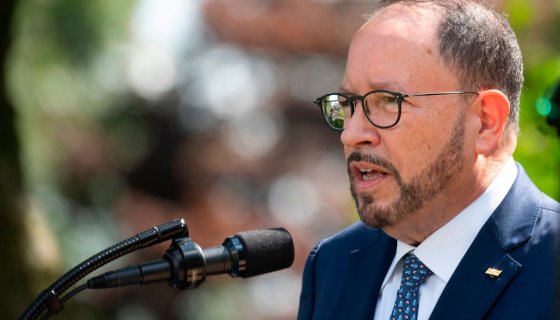 The iconic commercials used to have us singing GO GOYA, but now it’s NO GOYA after the company’s CEO puckered up and effectively kissed the racist-in-chief, orange ass.

Twitter is currently cooking Goya Foods and not in a good way. Yesterday (Jul.9), during Trump’s signing ceremony of an executive order promising to create an “advisory commission tasked with improving Hispanic Americans’ access to economic and educational opportunities,” the company’s CEO,  Robert Unanue, stepped in it by praising agent orange.

Unanue had the audacity to say we are “blessed” to have Trump as a leader and called him a “builder.”

“We’re all truly blessed at the same time to have a leader like President Trump, who is a builder.”

Unanue, deservingly so, was immediately dragged up and down timelines because somehow he must have forgotten just how extremely racist Trump has been when it comes to Latino community.  This is the same man who announced his campaign by describing Mexicans as rapists and drug dealers, ran on building a border wall to keep out primarily Latino immigrants. His administration has also been separating families at the border and putting children in cages.

U do realize Latinos buy your products? The same people Trump has routinely shit on!

The brilliant and very catchy hashtag #Goyaway immediately began trending with people calling for the boycott of the company and its products, which have been a staple in the homes of many Latino families for years.  Former presidential candidate, double-downed on the boycott while Unanue’s lips still had Trump’s cheetoh dust residue on them stating in a Tweet:

“Praising a president who villainizes and maliciously attacks Latinos for political gain. Americans should think twice before buying their products.”

.@GoyaFoods has been a staple of so many Latino households for generations.

Now their CEO, Bob Unanue, is praising a president who villainizes and maliciously attacks Latinos for political gain. Americans should think twice before buying their products. #Goyaway https://t.co/lZDQlK6TcU

While we don’t recommend throwing away food, especially during these times, it’s understandable if you decide to move on to another company cause there are plenty of other options. Let this be a lesson to any company who support mainly comes from minorities, Trump ass-kissing will not be tolerated.

No is the same in every language. You can peep the reactions to Goya’s cancellation in the gallery below.

#Goyaway 🤯 What a fucking fool! Absolutely boycotting all @GoyaFoods ! Trump would have deported your grandfather and put his children in cages. As a Latina, it is infuriating that you could defend this ‘man’ rather than the Latino community who has BUILT YOUR BRAND. pic.twitter.com/i1VPaLB6AP

Fine. Let Goya donate food to the masses but I as a consumer will buy my products from a company whose CEO doesn't deliver a Dear Leader speech to the most dangerous, divisive, racist "president" in US history. #Goyaway

Goya gives a big FU to the Latino community. How many millions in PPP funds did you sell us out for? #boycottgoya #goyaway pic.twitter.com/R2SGg4hke4

Good to know @GoyaFoods thinks its chickens should be cage free, what about kids?#Goyaway pic.twitter.com/3OijEK9NRh

My West Indian heart bleeds for the tragic end of an empire.

No more #GOYA for me.#Goyaway #GOYABOYCOTT
I mean it.
Not having it.

The nice thing about a free society is that you're FREE to boycott the shit out of companies like Goya that support racist, sociopathic criminal assholes like trump.

Don't like it, don't buy it.
Don't shop at places that sell it.#Goyaway

After their Latinx customer base vow to #BoycottGoya…

And Trump supporters vow to support them…

Me crossing all the Goya products off my shopping list. #Goyaway pic.twitter.com/jx7vvewHBj

How can a POC who sells seasoning support such an unseasoned President? #Adobo #Goyaway pic.twitter.com/GYkBf2Mwtl

This is some twisted 🤬..
The bulk of @GoyaFoods customers are the same folks targeted time and again by this administration. @GoyaFoods have been a staple in my home for years

That ends today. I can not support a business that supports Trumps policies of bigotry & hate#Goyaway https://t.co/dCgpQHzfXB

We should tweet kids in cages pics all night at Goya #Goyaway pic.twitter.com/SgoxDEsZ5l

Hey @GoyaFoods, you do realize your CEO Robert Unanue pledged his (your) love for a man that hates Hispanics and Latinos? He just tanked @GoyaFoods #Goyaway ⬇️⬇️⬇️⬇️⬇️⬇️ pic.twitter.com/DfVfqlphu2

Well that does it. We won’t be buying any more @GoyaFoods products in this home. We don’t support those who support pedophilia, rape, grift, murder, and treason. #goyaway https://t.co/eWjKMgTYwT

Hard to overstate what a big deal this is – I don't think I know a Latinx family that doesn't have @GoyaFoods products in their pantries.
Not mine. Not anymore. #Goyaway https://t.co/3O6LjCjs7l

When the vast majority of your customers are Latinos, you might expect a backlash from serving as a prop for a guy who puts brown children in cages, calls countries like El Salvador, “shit-holes”, denies Puerto Rican deaths and calls Mexicans, “rapists and criminals”. That’s all. https://t.co/Pi2Il00RMt

When a corporation with a predominately Latino customer base chooses to embrace the most vile, xenophobic, racist and predatory political figure of this era, its disqualifying.