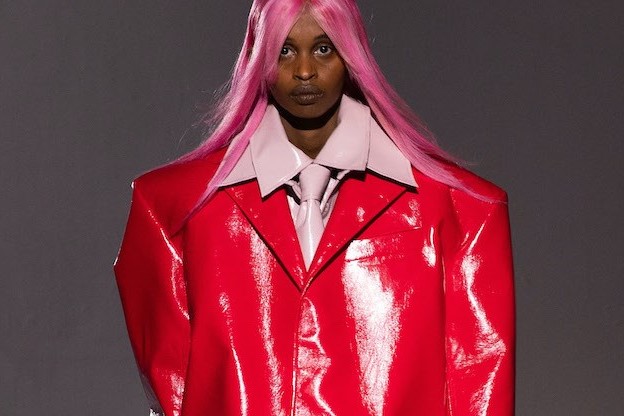 Ninamounah Langestraat and Robin Burggraaf are obsessed with the art of seduction. When they’re not turning out films that capture the tension of teenage sexual awakenings or sending cowboys wearing saddles designed for human wearers down the runway, the Amsterdam-based duo behind Ninamounah are weaving latex-clad subs into unassuming sweater vests and finishing collections with sculptural handbags moulded in the shape of phalluses. But don’t think this fascination with all things kinky is something they wear on their sleeve – half the time you’d blink and miss these subtle flashes of subversion, given the devil is in the details.

Their most recent collection, which got its debut as part of Paris Fashion Week’s AW21 season earlier this year, offered yet more of these if you know, you know moments. While eagle-eyed fans of the esoteric yet wholly inviting label likely had an eye out for what Langstraat calls ‘glitches’, those less versed in Ninamounah’s erotically-charged universe likely found themselves doing a double-take. At first glance, the new season put forward a series of house signatures, including sharp tailored trenches, cinched pencil skirts, wide-shouldered button-downs and boxy leather blouson jackets. But on closer inspection, something was up – quite literally.

“We were thinking about the aggression of seduction,” explains Langestraat of the inspiration behind the AW21 collection. “Most of the showpieces were really inspired by the aggressive female striped hyena, which has this extremely enlarged, half-foot long clitoris that is often mistaken for a penis.”

Pause the show’s film at just the right moment, when the model is at just the right angle, and you might spot one of these hyena-inspired clitorises jutting from their hips. Pushing against the satin gowns and pleated minis they sit under, or otherwise protruding from the seams of velvet trousers, the label’s ‘pseudo-penises’ turn garments into tent-like structures that speak to the underlying complexities of female sexuality. “There’s this real strength and dominance to them, but there’s also a sense of misunderstanding,” adds the designer. “You come away thinking: did I really just see that?’”

Now, as the collection is about to land at LNCC, we catch up with Langstraat and Burggraaf as they go deeper on the inspiration behind the collection, the strange effect of isolation on seduction, and violent snail sex (yes, really).

Hey, both of you! First of all, can you tell me how the collection came together, and where the inspiration came from?

Ninamounah Langstraat: At some point during the pandemic, I fell really, really in love, like insanely in love, and I was reflecting on the way human relationships have changed because of the coronavirus – you know, you cannot touch each other any more, there’s this weird distance between you, and I think that’s what triggered everything. I was thinking about seduction without the touching, or the smell, or being close to each other, and the layers of seduction – it has so many meanings. It could be the hands, it can be hypnosis, whatever.

As well as hyenas, I was researching a lot of seduction in insects as well. Snails have this amazing seduction dance, and when they’re going to mate they stab each other with these arrows that really hurt! Same with snakes – when they have sex you’re not sure if they are fighting or making love. Beyond the ‘clitorises’ you see on some of the looks, there are a lot of intertwining shapes made using piping that tap into these layers of seduction. The aggressive and dominant versus the soft and loving – I find these tensions really interesting and romantic in a way.

“Snails have this amazing seduction dance, and when they’re going to mate they stab each other with these arrows that really hurt! Same with snakes – when they have sex you’re not sure if they are fighting or making love. Most of the showpieces were inspired by the aggressive female striped hyena, which has this extremely enlarged, half-foot long clitoris that is often mistaken for a penis” – Ninamounah Langstraat

Could you talk me through the film itself? I love the way it feels very typically glitchy, like something is just ever-so-slightly ‘off’…

Ninamounah Langstraat: During lockdown, I really wanted to learn something new and do something with my body that would let all the pent-up energy out – so I started learning to play the drums. To start with, it felt super unnatural to me, because you need to make these connections with your body that you don’t normally use at the same time, so my drum teacher asked me to do some homework and play backwards for one hour a day. That way, you break the connection you have with your body (that makes it think) it has to go forward.

I was really bad at it at first, but now I’m okay! But it made me think about the way a small glitch that feels super uncomfortable and unsafe feels supernatural when you do overcome it, and of course, we wanted our fashion film to have this kind of strangeness to it – something you don’t understand immediately, that you have to look at twice. That to me is real beauty, beauty itself can be really boring, but when it’s strangely beautiful it can be really interesting.

Talk me through the casting – I love that you have this amazing, growing community of friends and creatives that you call on for every show you do…

Robin Burggraaf: It was nice, because restrictions meant we had to keep things very small and very local, so it’s a bunch of nine or ten of our friends in Amsterdam who are close to us and touched us in very strange and important ways during the lockdown. We really tried to look for something fresh and in the direction of people who are beautiful because of who they are or because what they do inspires us.

How did you find creating in lockdown, and being creative in general across the course of the last 15 months?

Robin Burggraaf: Personally, I really enjoyed it, because it gave us a lot of time to pay attention to the details that normally we have much less of. There was less travelling, less pressure, less events. Making our Paris debut felt a bit weird though – the film was recorded and everything was made in Amsterdam. Usually, we’d be in Paris, dying for a week straight, working on no sleep!

Ninamounah Langstraat: To start with, it was really nice and chill, and we were doing the same amount of projects, just from our studio in Amsterdam and nowhere else. But as time went on I got really restless and hyper.

Robin Burggraaf: I think that’s why we did so many projects. I think we were trying to fill this void and connect in all possible ways to as many people as we could as everyone was so isolated. Normally you’d get the same feeling from doing a massive runway show, but through lockdown we had to do maybe 20 smaller projects to make up for that.

Ninamounah Langstraat: We were super lucky though – we’re not allowed to complain. We have an amazing studio, we were never sick, and we could have worked on forever.

“Beyond the ‘clitorises’ you see on some of the looks, there are a lot of intertwining shapes made using piping that tap into these layers of seduction. The aggressive and dominant versus the soft and loving – I find these tensions really interesting and romantic in a way” – Ninamounah Langstraat

You’re known for doing things on your own terms and not really sticking to schedules. Now you’ve shown on the PFW schedule, is this – and your pace – going to change?

Robin Burggraaf: We’re going to keep doing things at our own pace for sure. We already decided before we’d even had our first call with the Fédération we were never going to be the kind of brand that pumps out eight collections or four collections with big runway shows. We decided that we want to do Paris Fashion Week and a massive runway show every March, because autumn/winter is closest to our hearts. In September, we’ll do our own thing – maybe Amsterdam or a smaller fashion week somewhere like Lisbon, where we showed last year. We also really want to think outside the box – why stick to a runway show when we could do an exhibition or a concert? We’re very open-minded about it all.

I feel like that could be the way forward for fashion – having, say, a big season in March, and then designers going off and doing more creative or low key things come September for example. It feels like a tangible solution to the fact there is just so much going on, and the fact everyone in the industry – from the designers, to the press, to the people in the factories making the clothes – is under so much pressure…

Robin Burggraaf: Totally. I think it’s good to be open to a new structure, a new way of working. I think it’s becoming more possible now, because in the last year we’ve come to understand there can be a different way – it’s not so strict any more, which is something we’re enjoying a lot. But even if this wasn’t the case, I think it’s also up to brands like ours to create their own space, and not try to keep up with what everyone else is doing.

Check out the collection in the gallery above, and head here to shop.