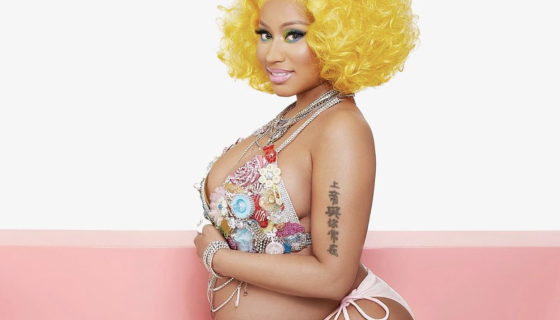 may have shook up her Barbz with her online , but her maternity photoshoot may actually break the internet.

On Monday (Jul 20), took to Instagram to share the good news that she and husband, , are expecting , Rocking a sparkling Lacey Dalimonte bra studded with baby-themed trinkets along with the caption, “Preggers.” The “Yikes” rapper posted a few photos of herself cradling her baby bump while clad in the bejeweled bra and see-through platform heels studded with pearls.

During an interview with Page Six, Delemonte reveals that she was contacted by Nicki’s camp a week ago to design the bra for the colorful shoot.

“I was visiting my family in Michigan and got an email from Nicki’s stylist, Aquiles. He was like, ‘Hey, I have this crazy project — want to try and make it work?,’” Dalimonte said. “He told me the exciting news — which obviously was hush-hush — and said that the concept was old-school Nicki, very Harajuku.”

Love. Marriage. Baby carriage. Overflowing with excitement & gratitude. Thank you all for the well wishes. 💛

While the deadline was tight, the recent fashion school graduate states that it was her desire to help make the soon-to-be mom’s photoshoot complete that led to her completing the complicated piece a day early. Overall she says the experience is truly rewarding.

“To make something a week ago and have it already be out is really exciting,” Dalimonte told us of her creation for the Grammy nominee. “This is my first major project, and it’s really rewarding — especially since it’s such a huge moment for her.”

While Minaj stuck to her script for the first shoot, for her second series of photos, she featured the iconic eye of high fashion photographer David La Chapelle, who captured the Young Money Queen in a “Virgin Mary” inspired photoshoot to help capture this magical moment in her life. Although there was no special caption that accompanied the post, the breathtaking photo does seem to speak for itself.

Nicki Minaj and Kenneth Petty just one month after she announced on Twitter that she was retiring to “have my family.”

As of press time, Nicki Minaj did not include her due date with the announcement.