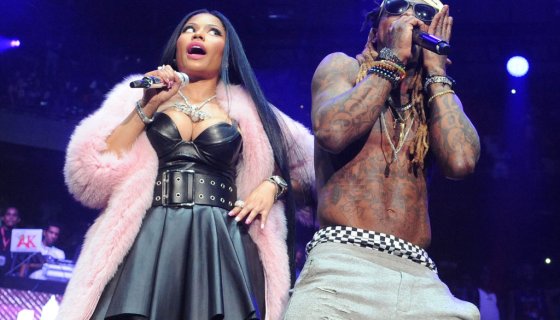 has returned this week with the eighth episode of on Apple Music.

On Sunday (Jun 14) ‘s Young Money Radio aired featuring Weezy speaking to special guests ,, ,, and . While Weezy chopped it up with the usual questions with fellow MC, N.O.R.E., comedian Lil Duval, and frequent collaborator T-Pain, who joined the show to chat about his new song “Get Up” and donating the proceeds to Crime Survivors For Safety and Justice, it was his conversation with Damian Lillard and Nicki Minaj that left fans wondering what the Young Money cappo has in store.

During the interview, Damian Lillard spoke to Wayne about taking action in support of and shared memories of and how he influenced him as a young player.

Lil Wayne: Let’s start off with the climate of what’s going on outside right now. I see you very active. I saw you was involved in a protest and you marched for the death of George Floyd and everything. How was that? Speak on that.

Damian Lillard: It was cool. I had a personal experience with one of my friends I grew up with, or grew up around, we wasn’t close friends, but we was around each other pretty often, catching a bus to school. He played on the football team with my brother, Oscar Grant. I don’t know if you’ve seen Fruitvale Station, the movie Fruitvale Station.

I grew up around him so that was right here at home. So having that type of experience was something that connected me to so much police brutality and the issues with law enforcement. So, now that I’m older and we’re experiencing all these situations, it’s just like, I feel connected to it. So me just posting and me being a part of the outcry, I felt like I needed to be off the internet and in the action, in the field. If it bothered me the way it bothered these people that’s out here protesting and standing up for what they feel is right behind all these injustices, I feel like there’s no reason I shouldn’t be out there doing the same thing if I feel the same way.

Although the NBA star dropped jewels, the interview wasn’t all about social justice, Lillard discussed his new song “GOAT Spirit”, before teasing fans about a possible collab with Wayne.

Lil Wayne: I can’t wait until they hear the new joint that we got together. Y’all already know.

Damian Lillard: Yep. I got it.

Damian Lillard wasn’t the only gues on the show with a collaboration surprise, Young Money Queen, Nicki Minaj, discussed starting out in music as a female rapper and how she’s enjoying married life.

Lil Wayne: Now, I heard you recently got married. Congratulations.

Nicki Minaj: I’m no longer yours.

Lil Wayne: How do marriage life been treating you?

Nicki Minaj: I can’t complain. I really cannot freaking complain. And I didn’t think it would be as refreshing and calming as it is. But you know, even if you’re not married, just when you have somebody that feels like your soul mate or is very understanding or understands you. It just make you feel like you on top of the world. You just need that partner.

Nicki, who is rumored to be pregnant, confirmed that she’s in the studio, while also revealing why she’s been absent from social media. “I’m definitely working but I was also just taking time off social media in general. It can be so extra,” said Nicki. “I think everybody needs that time to themselves and their family and to think.”

In addition to marriage, the labelmates discussed a potential joint album before hinting that one may already be in the works.

“When we gonna do this?” Wayne asked Nicki, who responded, “Your wish is my command. I would definitely do it, whenever you say the word.”

Check out the full episode of Young Money Radio below.