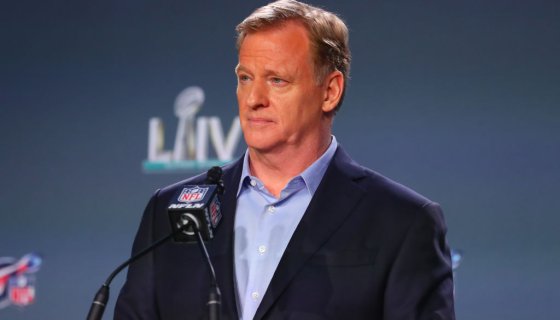 was right all along. On Friday evening (June 5), NFL commissioner Roger Goodell released a statement condemning racism and expressing the pro football league’s support of the Black Lives Matter movement.

No, as far as we can tell, hell has not frozen over.

The statement was explicit, with the message accompanying the video statement saying, “We, the NFL, condemn racism and the systematic oppression of Black People. We, the NFL, admit we were wrong for not listening to NFL players earlier and encourage all to speak out and peacefully protest. We, the NFL, believe Black Lives Matter. #InspireChange.”

The message comes after a number of young, star NFL players issued a moving video message demanding the league do right by its Black players. The incredibly awesome, and at times chilling, montage features players like Saquon Barkley, Patrick Mahomes and Odell Beckham, Jr. speaking the names of police brutality victims including George Floyd, Breonna Taylor, Ahmaud Arbery, Eric Garner and Laquan McDonald—and saying they could easily have been any of them.

Clearly, the NFL got the message with Goodell dropping his statement about 24-hours later. It’s almost a complete reveral from the same league that forbid players from protesting and even early this week , which got panned.

NFL: Do The Right Thing by this man. pic.twitter.com/FSfhMULdQ4

Almost immediately it was noted that Goodell said he would be reaching out to players who have been wronged, but he did not mention Kaepernick, or anyone, by name. It was Kap’s kneeling protest in 2017 that effectively got him blackballed by the league. In hindsight, his foresight was admirable since here in 2020 there are worldwide protests against police brutality and injustice against Black people, which was his message all along.

The NFL has a ways to go but this is the best they’ve done so far. Even better, give Kaepernick a job, he is qualified.

But don’t think that Goodell and co. had an “aha” moment. The climate of world, the league’s star players speaking out and Drew Brees playing himself meant the league can potentially take a big financial hit. They always see reason if it affects their bottom line.

This is also dropped on the heels of illegitimate President Donald Trump dropping Twitter vomit about NO KNEELING.

…We should be standing up straight and tall, ideally with a salute, or a hand on heart. There are other things you can protest, but not our Great American Flag – NO KNEELING!

Peep the reactions to the NFL’s mea culpa below.

We, the NFL, condemn racism and the systematic oppression of Black People. We, the NFL, admit we were wrong for not listening to NFL players earlier and encourage all to speak out and peacefully protest. We, the NFL, believe Black Lives Matter. #InspireChange pic.twitter.com/ENWQP8A0sv

Roger Goodell just apologized for the NFL not listening to players' race concerns, and said "we believe Black Lives Matter."

Now apologize to Kaep and get him a job.
Because jobs matter, too.

It’s like what Gandhi said, “First they ignore you, then they collude to deny you employment, then they film a video in Roger Goodell’s rec room.” https://t.co/cWVG2LOpBV

The NFL has close ties to @realDonaldTrump. NFL will you rehire @Kaepernick7? https://t.co/UOT6YcHOsa

BREAKING: NFL Commissioner Roger Goodell just admitted that the NFL was wrong for not listening to players’ peaceful protests.

As Trump says “NO KNEELING,” the NFL is now welcoming it.

Roger Goodell's video is a direct reply to this incredibly powerful statement from some of the NFL's top players. Four years after Colin Kaepernick took a knee against injustice, the players are finally being heard. Now we'll see if the NFL and its teams actually change. pic.twitter.com/Fzee02bScZ