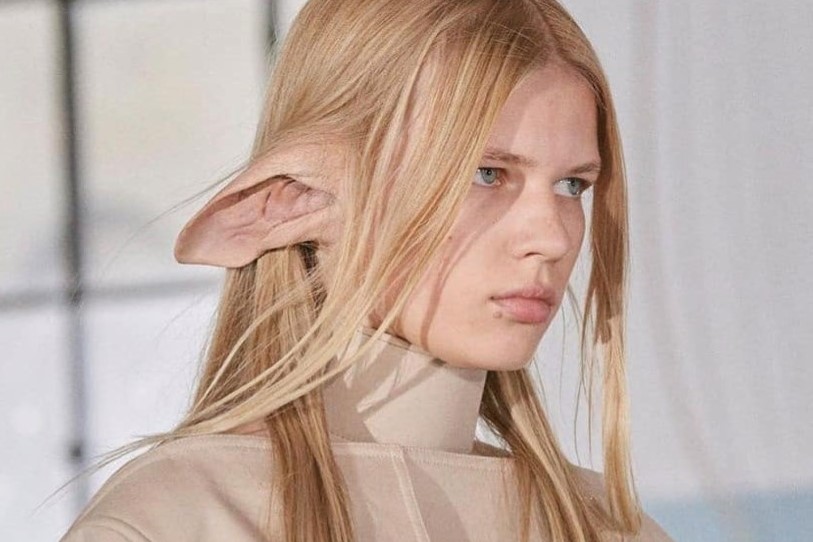 I smell a viral momenté

Cast your mind back a couple of years and you may remember the moment elf ears swept social media. Championed by TikTok influencers and Grimes alike, the aesthetic marked a shift in make-up trends, as whimsical looks took over the TL, and cottagecore, clowncore, and dark academia found their feet in the deep recesses of the internet.

Cut to SS22 and, in the hands of Riccardo Tisci and make-up maestro (and former Dazed Beauty creative director) Isamaya Ffrench, and the elf ear just evolved into something new entirely. Reader, we hereby present you with the Bambi ear.

As worn by models pacing the runway as part of Burberry’s latest presentation, which once again took place in the digital realm, the droopy ears appeared incredibly lifelike, protruding out between strands of their wearers’ hair. Crafted from silicone with the texture of human skin, the unique accessory lent a subversive, surreal edge to what was actually a pretty sexy collection (notably named Animal Instinct).

When it came to the clothes themselves, Tisci dove deep into fantasy for the new season. Turning out reworked and reconstructed backless trenches that offered a cheeky flash of bum, second-skin bodysuits that glittered with crystals, and shaped sweetheart bustier and seamed, almost underwear-esque trouser combos.

The offering spoke to the sweep of sexiness that’s currently dominating the SS22 season, with brands like Blumarine, KNWLS, Supriya Lele, and Luar all dialling up the sensuality within their own shows. “It feels like women are being sexy again,” explained Tisci of the moment. “Sex is an expression; a language which is very strong. And this collection is very confident.”

Maybe it’s due to us spending the last 18 months in lockdown, but overarchingly, next season’s clothes are seemingly being designed to get you laid. Roll on the hot girl summer of 2022 – postponed sure, but apparently still coming.