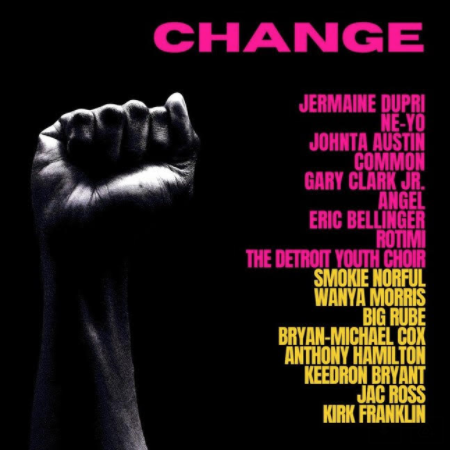 Knowing that this 2020 presidential election, between Donald Trump and Joe Biden, is the most important one of our lifetime is an understatement. We’ve endured such a tumultuous year, filled with tragic passings of notable celebrities, black lives publicly taken by authorities that took oaths to protect and serve, a pandemic with an ongoing quarantine status that continues to plague society and an economy that has tumbled to bury the empolyment market of everyday citizens. It’s a lot to bare. Yet, like so many times before in the journey of black folks, music and its soothing nature of calming the storms we endure and the togetherness of song, our musical maestros are here to give us hope for better days ahead.

Super producers Jermaine Dupri, Ne-Yo, Johnta Austin and Bryan Michael Cox have spearheaded the sonic healings with a new single titled “Change” which is currently on Dupri’s So So Def record label. Not only has this creative collective come together for the charitable organization, Social Change Fund (created by NBA stars Carmelo Anthony, Chris Paul and Dwyane Wade), they have gathered an incredible crew of singers from across music genres to spread the message of change in our black communities. Artists like, PJ Morton, Common, Gary Clark Jr., Wanya Morris of Boys II Men, Smokie Norful, Eric Bellinger, the young voice of viral sensation Keedron Bryant, singer/actor Rotimi, and even Kirk Franklin lends his talents, among others.

“We created the song to call attention to these long-standing issues,” stated Dupri. “Members of the global community are now awakened to issues affecting BIPOC. The global pandemic forced us all to reevaluate everything from our health to police brutality and systemic racism. We are now witnessing a paradigm shift that creates an opportunity for real impactful change. ‘Change’ only resonates the need for topics that should have always been prioritized.”

While recently featured on a pro-Biden/Harris ‘I Will Vote Concert,’ the visuals for “Change” was introduced by Whoopi Goldberg to those watching the stream of the event. “This song is about inspiration, motivation and determination. The current and next generation need to know someone is rooting for them, someone believes in them. This song is that reminder,” says legendary songwriter Ne-Yo.

Jermaine Dupri would like to thank everyone who donated their time and talents to this project, including So So Def Recordings, Straight Up Entertainment Group, W&W Public Relations, Inc., Symphonic (who are flowing through 100% of all royalties to the Social Change Fund) and the artists who so graciously gave their gift of song to this project.