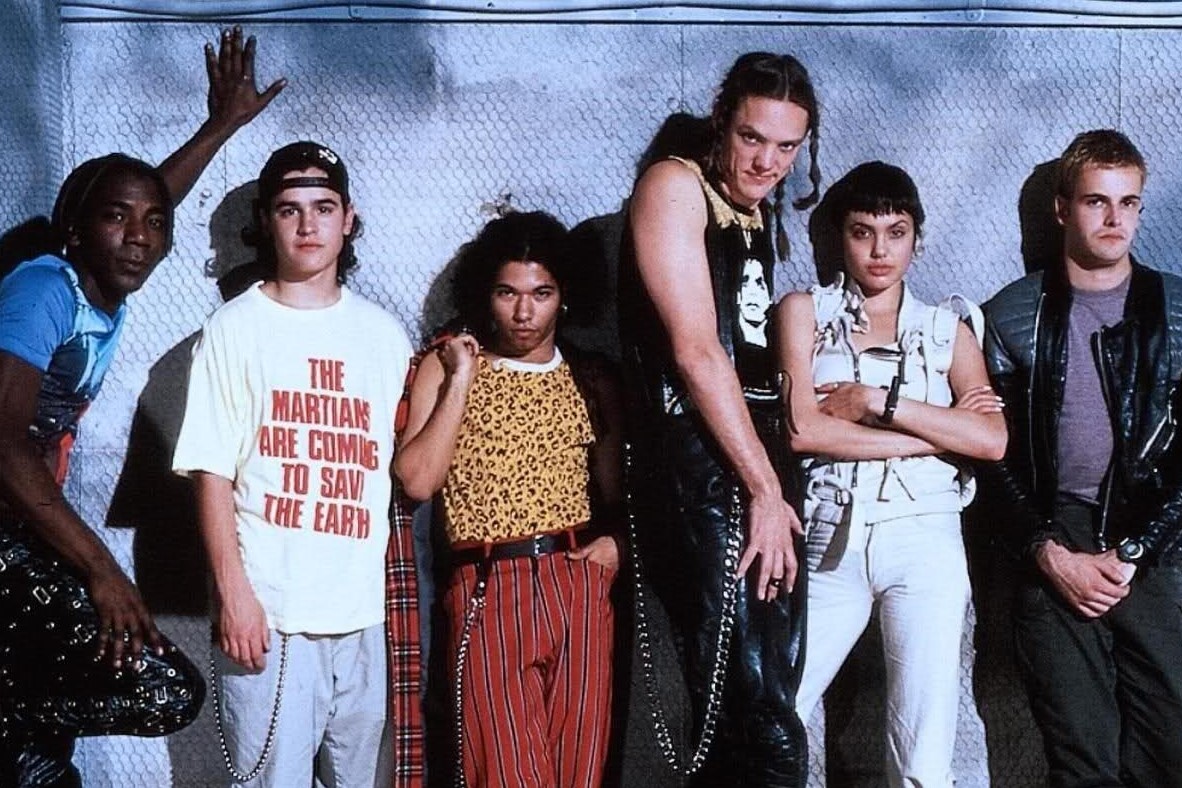 25 years on from its release, costume designer Roger K Burton remembers the film that helped put cyberpunk style on the map

Speaking to the Wall Street Journal back in 2012, John Waters lamented a decline in subcultural style: “When I was young there were beatniks. Hippies. Punks. Gangsters. Now you’re a hacktivist. Which I would probably be if I was 20. Shuttin’ down Mastercard. But there’s no look to that lifestyle! Besides just wearing a bad outfit with bad posture.”

In real life, hackers might have come to favour the stealth and comfort of hoodies and sweatpants for logging long hours on their laptops – as we learned from The Social Network, even billionaire tech overlords prefer ‘fuck-you flip-flops’ over suits. But before the cool minimalism of The Matrix (1999) and the elegant goth of The Girl With the Dragon Tattoo (2009) made hacking synonymous with well-cut black leather jackets, one 1995 movie had an altogether different proposal when it came to how this burgeoning subculture might dress.

Hackers, directed by Iain Softley, follows a gang of teenagers on their travels through cyberspace, encountering corporate corruption and conspiracy embedded in the code. While the tech-centric plot is very much a product of its time – floppy disks feature heavily – its throbbing, Prodigy-laden soundtrack, kaleidoscopic hacking sequences, and a photogenic young cast including Angelina Jolie, Jonny Lee Miller, Matthew Lillard, and more have cemented its status as a cult classic. But one aspect of its appeal, which finds itself posted and regrammed ad infinitum, is its clothing.

Wearing costumes designed by the legendary Roger K Burton – who’s dressed everyone from the cast of Quadrophenia to Kanye West – the kids in Hackers rollerblade to school, get busted by the Secret Service, and hack the planet in Seditionaries parachute shirts, Quiksilver rash guards, bondage trousers, tacky tourist tees worthy of Vetements runways, and ‘half-American football, half-medieval’ Vivienne Westwood armour jackets. There’s even a date-night homage to John Galliano’s AW94 collection, which Burton says he was fawning over at the time.

These cross-cultural touches hint at the globalisation afforded by the internet, while the vintage pieces – many of which were pulled from Burton’s own extensive archive, The Contemporary Wardrobe Collection – give the aesthetic an agelessness. Utilitarian clothing also plays an important role, with fencing uniforms, military jackets and an orange life vest adding a sense of physicality and danger to what is sometimes just a group of people sitting around a computer. “They didn’t have a big wardrobe budget, so I had to be a bit creative,” he tells us.

Now, to celebrate the film’s 25th anniversary, Burton is staging an exhibition of his costumes at London’s Horse Hospital, where his archive is housed. Alongside Jolie’s jodhpurs and Lee Miller’s standout harness, visitors will be able to peruse exclusive behind-the-scenes material including moodboards for each character’s look and Polaroids of the actors’ costume fittings. Ahead of its opening on December 14, we sat down with Burton to discuss his inspirations and the film’s lasting legacy – as he allowed us a sneak peek at never-before displayed photos from the set.

ON RESEARCHING REAL LIFE HACKERS AT THE TIME

“We went on a series of recces around New York, because the hackers over here (in London) didn’t really have too much of a profile: you couldn’t identify them. But in New York it was quite a big deal. They’d have conferences, and so on. And, fucking hell, they were so boring. Dressed in black. Some of them were quite old, actually, and they’d obviously been into computers for a long time. It didn’t quite have the glamour or the persona that I really wanted to create so we had to create our own, basically.”

ON HIS INFLUENCES AND INSPIRATION

“It was a really good time, street fashion-wise. The magazines of the day were brilliant, full of stuff. And there were a lot of club things happening in the mid-90s, where kids were really dressing up. I sort of wanted to reflect that in the whole movie, but to give it this slightly futuristic edge. They were also very conscious it was for the American market, and they were a little bit scared that it was going to be too fashion-orientated. Because, you know, there’s this ridiculous belief that if you make something too fashion-of-the-day it has a shelf life and people will just laugh at it in a few years’ time. So I also tried to make it timeless. By using stuff from the past, present and my idea of the future. I wanted to mix it all up. And here was a perfect opportunity to make this patchwork of style, as it were. Because I love so many things. People say, ‘What’s your favourite thing, what’s your favourite period?’ Well, I like them all, mixing them all up together. That’s my favourite thing to do.

“I remember visiting New York on this one recce. It was probably July or August, pretty hot. There was this thing called Wigstock going on, which was an annual event where all these kind of Lower East Side characters dressed up (and) came out with amazing wigs. It was on one of the piers, they had loads of bands on and it was like, woah, what a spectacle. It was absolutely incredible. I remember getting really inspired by all these kids that were dressed to the nines with these crazy wigs. Lady Bunny, she was there. Then I realised that they all shopped at this particular shop owned by Patricia Field. And they didn’t only shop there, they all worked there as well, all these hip kids. So I spent a lot of time hanging around Patricia Field’s shop and buying things and mixing them up with stuff I was having made or that I got from Canal Street Market. Just getting into that whole New York club scene, which was great, and then mixing it up with classic English, punk, new romantic stuff.”

ON THE FINDING THE CHARACTERS’ PERSONAL STYLE

“I’ve always been really interested in surrealism and using it in modern-day terms, and at that time, I was going through a bit of a surrealist (phase) again. I sort of pictured this kid Phreak (Renoly Santiago) as the Salvador Dalí (of the group), (with) all the mixed-up leopard skins. Joey (Jesse Bradford) was sort of dressed by his mum in little dungarees and stuff but was into heavy metal. I really wanted him to look like this sweet little boy who wanted to be part of the gang but didn’t quite get it.”

ON SENDING A MESSAGE THROUGH COSTUME

“When you look at the garments, they’re a real patchwork of coded messages to the outside world. It’s like when I was doing commercials – I mean, it’s a bit more difficult with commercials because I always wanted to subvert them. But sometimes you might be able to get a bit of a message up to, you know, some little kid who’s in a bedsit in Lincolnshire, some remote little village thinking, ‘What the fuck has that guy got on him?!’ It was those sort of people I was trying to reach out to. With commercials you have to be very subtle, but with this, I could really kind of go for it, because the production didn’t have a clue what I was trying. It was a bit like Pee-wee’s Playhouse, which was notorious for that – all the artists that were involved with that production were all pretty out-there and they were really trying to subvert it by doing kind of phallus prints and God knows what. And I was trying to do that a little bit with this, and particularly with the Cereal character (Matthew Lillard).”

ON KNOWING IT WAS A CULT HIT

“I got a lot of mail at the time when it came out. I think it just hit a button with some kids. I remember there was this one girl from the north of England, who was completely besotted with Angelina’s look, and she wanted it so desperately that she kept writing me letters. It got a bit weird, I thought she was stalking me or something! Even now, 25 years later, I’m still getting letters and emails and fan mail in a funny sort of way. Because I think I tried to make it timeless. I didn’t realise quite how timeless I was making it at the time. (I was) trying to put these things together that kind of made no sense, but together they did make sense. You think, OK, well, yeah, biker jacket. How about putting that with riding jodhpurs, just kind of mix it up and give it a fresh interpretation, a fresh look. Clothes, to me, I’ve always seen like oil paints: the only way you can make them come to life is if you mix them all up and be a bit adventurous. (So) it was kind of a process of experimentation, but it came together better than I anticipated.”

ON MAKING THE CLOTHES A FOCAL POINT OF THE FILM

“It’s so rare one gets an opportunity to do a movie that wasn’t meant to be about the clothes, but it really is about the clothes. Usually movies about clothes end up as a comedy or costume drama or something. You know, The Devil Wears Prada and its parody (of the fashion industry). I don’t know how I got away with what I did. Iain, the director, was very trusting. He wanted to vet everything before it went on the set, but invariably, he let things slip through the cracks. And if we didn’t get it on a main character, it would go on somebody else that he wasn’t so attentive towards!”

ON KEEPING THE COSTUMES AFTER FILMING ENDED

“I’m really pleased we’ve still got everything. Because normally, with a movie, you design the clothes and they become owned by the movie, and then end up burnt or in a charity shop or a museum, depending on what it is. In this particular instance, they didn’t have a massive budget, but I really wanted to go to town on it, so I said, ‘OK, let’s let’s do a deal: if I can get the clothes back, if I can get all purchases in return for the hires then that means I can retain it all, and they were quite happy to do that. Basically, they didn’t think it was gonna be a big deal.”