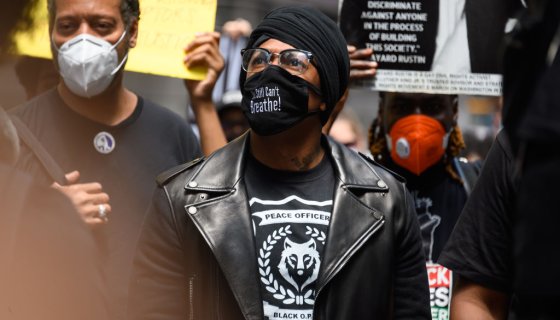 crafted a media empire as the face of several hit television shows and a million-dollar production company seen as one of the more successful ones owned by a Black person. Cannon is now the subject of an explosive discussion happening on social media right now after ViacomCBS cut ties with him over perceived remarks.

On a recent episode of the star’s Cannon’s Class series, Cannon had Professor Griff of Public Enemy fame as a guest on the show. Griff infamously was ousted from the veteran Hip-Hop outfit for antisemitic comments, and that informed a portion of their discussion.

Cannon expressed an idea that Black people are the original Hebrews and also spoke on conspiracy theories involving the Rothschild family that have circulated on the Internet and abroad for years.

“It’s never hate speech, you can’t be anti-Semitic when we are the Semitic people,” Cannon shared at one point in the chat. “When we are the same people who they want to be. That’s our birthright. We are the true Hebrews.”

ViacomCBS caught wind of the comments and ended their partnership with Cannon while later issuing a statement.

“We have spoken with Nick Cannon about an episode of his podcast ‘Cannon’s Class’ on YouTube, which promoted hateful speech and spread anti-Semitic conspiracy theories. While we support ongoing education and dialogue in the fight against bigotry, we are deeply troubled that Nick has failed to acknowledge or apologize for perpetuating anti-Semitism, and we are terminating our relationship with him,” read a portion of the statement.

Cannon took to social media to comment on the news and has not appeared to back down from his comments.

“heart nor malice intentions. I do not condone hate speech nor the spread of hateful rhetoric. We are living in a time when it is more important than ever to promote unity and understanding,” Cannon wrote.

He added, “Until then, I hold myself accountable for this moment and take full responsibility because My intentions are only to show that as a beautiful human species we have way more commonalities than differences, So let’s embrace those as well as each other. We All Family.”

On Twitter, the news of Cannon’s split with ViacomCBS spread wide, with some wondering where shows like his popular Wild ‘N Out series on VH1, part of the ViacomCBS umbrella, and shows like Fox’s The Masked Singer which he serves as a host.

We’ve got reactions from all sides listed out below.

To hear the portion of the chat that has folks talking, hop to the 48:00-minute mark.

Damn Nick Cannon got fired before the cops who murdered Breonna Taylor.

Nick Cannon along with the NOI been feeding black people every other week in the worst hoods of south LA and Compton…This video was taken in the Jungles. Going door to door, fed over 1500 people. I’ll never take the side of these crackas… pic.twitter.com/pgpUlm0jha

What nick cannon said vs what racists heard pic.twitter.com/URqOAMOhAn

Netflix ready to approach Nick Cannon for Wild n Out like pic.twitter.com/YyOjJ81R3y

Yesterday, Black Twitter laughed at the idea of Nick Cannon being cancelled for saying white people were genetically inferior and Jews controlled the media.

Today, Nick Cannon was fired from ViacomCBS and lost his multimillion dollar gig as host of The Masked Singer.

So a white supremacist can be the president of the united states, but Nick Cannon analysis the actions of white people and boom now he losing his job…mm tells you all you need to know about race and racism in this country.

I’ll support Nick Cannon in any way possible but I draw the line at listening to music.

Oh no, not Wild N Out, so Nick Cannon spoke the truth about how evil some white people have been throughout history and now they’re cancelling his shows. What a time to be alive!!! pic.twitter.com/fvyFFJp6j9

They aint never raped, pillaged, killed, and enslaved people in every part of the world. Idk where he get that shit from. It's so false. pic.twitter.com/RFakI11o8s

Nick Cannon gave me my first tv job in NYC. Unlike some celebs, he actually put on a lot of young gifted Black people by providing opportunities AND he cares. #IStandWithNickCannon pic.twitter.com/jvQVH43er6

the fact that Nick Cannon lost everything that quick but these mfs still have a job is BEYOND me🤷🏾‍♂️ pic.twitter.com/mGx20KOzcP

I’m disgusted with @ViacomCBS. South Park has been on Comedy Central for YEARS, saying whatever the fuck they want. But Nick Cannon speaks the truth and gets his show canceled? You know what that is right?

Damn Nick is trending cuz dissecting & discussing the psychological, philosophical, theological and physiological reasons why a race of people would treat Jews, natives, blacks, Hispanics and anyone who is different from them so horribly for so long is unacceptable 🙄 #NickCannon pic.twitter.com/IikosIG89D

This is absolutely RIDICULOUS! @NickCannon has never been the type of person who uses hate speech. To categorize him this way is disgusting. He uses his platform for edutainment.

I STAND WITH MY BROTHER #StrongerTogether https://t.co/M00iIjtvls