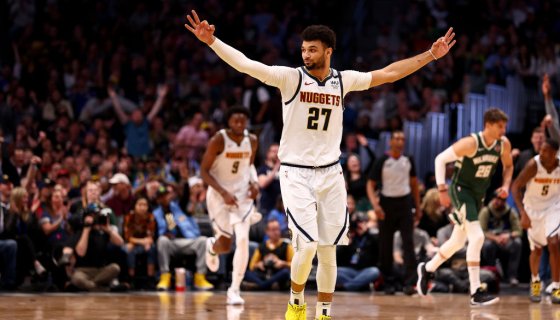 Of course, nothing ever posted on the ‘Net is truly deleted. The clip was on Murray’s Instastory on IG and…what were you thinking, sir?

The additional irony here is that Murray is a member of the Denver Nuggets, which recently revealed someone in its organization tested positive for COVID-19. So while he was supposed to be quarantined…bruh.

Going out on a limb and saying it’s not Jamal Murray https://t.co/t4btFf9zCt

But now Murray has straight-up deleted his IG. His girlfriend’s head game is getting all the props, though. So there’s’ that.

NBA arenas when Jamal Murray gf walks in to sit court side pic.twitter.com/1mJPqlz95q

Since Murray’s gaffe of posting his shenanigans, the jokes have been flying. They’re even clowning the man’s pubes. Good lawd some of y’all are petty.

LMAO. Of course, Murray was going with the “I was hacked” play, before apologizing. Sure you were.

First and foremost I would like to apologize to my fans. My account has been hacked, currently working on the issue. Thanks 🙏🏽

Also, the other active participant exposed herself. See what we did there?

If you have the video please delete it

Nuggets staff when they wake up and see why Jamal Murray is trending pic.twitter.com/1LPPloTozq

Going out on a limb and saying it’s not Jamal Murray https://t.co/t4btFf9zCt

NBA arenas when Jamal Murray gf walks in to sit court side pic.twitter.com/1mJPqlz95q

How Jamal Murray was looking at his IG before he deleted it pic.twitter.com/E4BIY40C7E

Jamal murray as soon as he realized he pressed "send" on his IG story pic.twitter.com/nqq2DOG2GH

Jamal Murray: "i was hacked"

Jamal Murray brainstorming ways to make it look like his insta got hacked: pic.twitter.com/mHOwbLREfi

Jamal Murray showing up at the nuggets front office saying his story was "hacked" pic.twitter.com/CDKcM6xXec

Draymond when he sees Jamal Murray showed his dick on ig pic.twitter.com/5Ee3RMosxS

Jamal Murray Running to go shave after getting flamed by all of Twitter pic.twitter.com/XJEw7fLIrj

Starting at guard with zero worries, getting that A1 SHHHHLURP is Jamal Murray pic.twitter.com/WMSmYtu0gT

“He deleted his IG story in quite the HURRY, ladies and gentlemen it’s JAMAL MURRAY!” pic.twitter.com/ilYV8hgHfY

Breaking 🚨: sources out of Denver confirm nuggets guard Jamal Murray Has just tested positive for Wildin out on the gram at 3 am pic.twitter.com/SZVu5fzb2L

I saw Jamal Murray trending and thought he got coronavirus but it ended up just being his girl giving him head on his IG story pic.twitter.com/k6xtgQ3Kkr