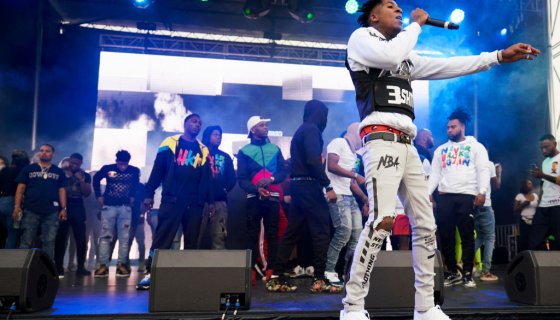 We’re not going to pretend we know everything about this brewing beef between and Kodak Black and the Sniper Gang, but it’s getting spooky out there nonetheless. It appears that the Louisiana rapper and boyfriend of the allegedly stabby fired a shot at Black and Jackboy, with Jackboy responding in kind.

As seen on DJ Akademiks’ social media page, another page Gossip In The City shared from their side rumors that YoungBoy was caught at his home with the woman that Mayweather allegedly stabbed and suggested he was cooperating with the police.

This tidbit caught Black’s attention from jail, who responded by blasting YoungBoy for allegedly folding in front of the cops. Black, who knows a whole lot about the law for all the wrong reasons, essentially tried to offer a guiding hand to YoungBoy but the advice apparently didn’t go over well.

This is what Kodak Black said on Instagram that set off Youngboy pic.twitter.com/GsW80KRGCb

YoungBoy was incensed by the insinuation that he would work with the cops so he went on a video rant blasting Black for watching his moves from jail. Check out the clip from Kollege Kid below. If you must, you can surely find more of the rants online. But to clarify what we’re about to share, YoungBoy suggested that his man 10 had with Jackboy’s lady but it didn’t phase him.

#JackBoy response back to #NbaYoungBoy We don’t care about those hoes, We don’t play basketball we in the #NFL 😈 , #Yb steady infecting these hoes. (Yb has herpes for those who don’t know) pic.twitter.com/sDhdCOkSBx

Jackboy most certainly had a lot more to say, including taking shots at YoungBoy and his herpes situation, and also saying that he’s starving his crew by being the lone money maker. Jackboy hilariously slanders YoungBoy’s crew for rocking Nike and says only broke cats are wearing that, which has drip Twitter in their feelings.

Yaya Mayweather made an appearance during YoungBoy’s IG Live rant after he bragged about springing her from the joint and referred to her dad Floyd Mayweather with some unflattering words.

Hopefully, that made sense because we’re still kind of lost on all of it. Check out the reactions from Twitter below.

I was today years old when I was informed that only broke boys (like myself) wear Nikes..according to Jackboy, Kodak’s boy… #NBAYOUNGBOY #Yaya pic.twitter.com/cvmMxxnBGl

Jackboy will fuck up nba youngboy

My nigga Jackboy solid.. NbaYoungboy? Never was a fan.. I don't listen to any of his music.. And I can't rock wit niggas that are knowingly passing around a std that you can't get rid of.. But these young dummies still gone buy/listen to his music tho.. #NBAYOUNGBOY #cancelled

This shit went from Lil Jon & T Pain on live with good vibes, to #NBAYOUNGBOY and #jackboy beefing lmao they saying some harsh shit 😂😂😂

kodak , jackboy & nba youngboy is the only entertainment rn 😭

So basically @GGYOUNGBOY jackboy say you need to get your niggas up outta them Nike’s & none of y’all have no car 😂‼️ https://t.co/GQDavsKSKa

@GGYOUNGBOY on @KodakBlack1k jackboy Ass . I'm Steppin wit Youngboy. Who y'all got