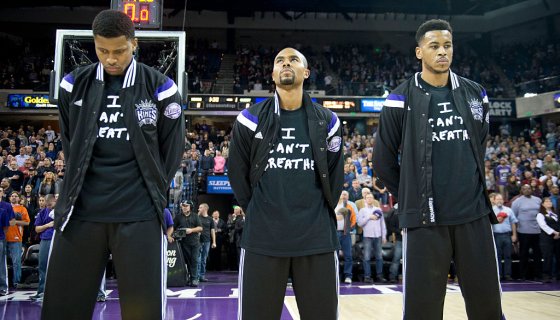 As the NBA season for next month, the instances of racial injustice still loom heavy in the hearts and minds of the players. The league is considering a move to allow players to make political statements in support of on the back of their jerseys for the rebooted season.

ESPN reports that National Basketball Players Association president and Oklahoma City Thunder star Chris Paul tells The Undefeated that talks to allow players to place statements such as “I Can’t Breathe” and similar messaging on the back of their jerseys have been underway.

“We’re just trying to continue to shed light on the different social justice issues that guys around our league continue to talk about day in and day out,” Paul said. “People are saying that social justice will be off of everybody’s mind in Orlando. With these jerseys, it doesn’t go away.”

Some NBA players have been outspoken about their desire to speak out about the current climate in the nation and they seemingly have the support of NBA commissioner Adam Silver. Paul said in the chat with The Undefeated that players aren’t beholden to the statements on their jerseys, but some non-Black players say that want to show solidarity and add statements as well.