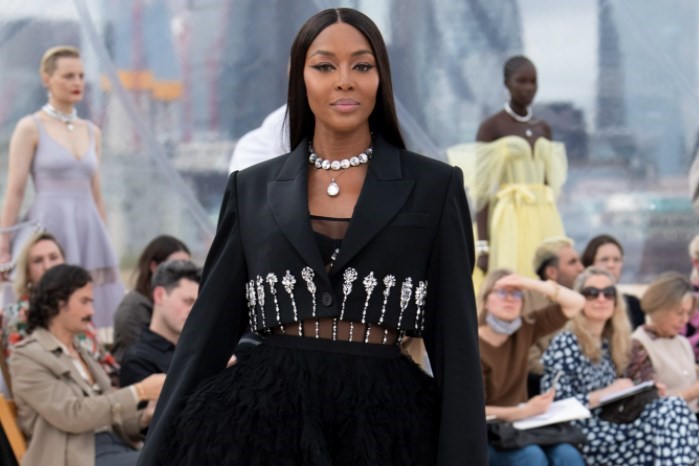 Versace, Fendace, Lanvin, Balmain, and now Alexander McQueen – Naomi Campbell is making up for lost time, though the tension which reverberates around the audience when she takes to her signature strut is just as palpable as ever. Today, the supermodel sauntered through a plastic dome-like structure, suspended high on the roof of a carpark in London’s Tobacco Dock. Part Winter Wonderland, part Canary Wharf restaurant, the reusable show space was actually conceived by architect Smiljan Radic, and played host to Sarah Burton’s SS22 outing at McQueen.

Though she was a favourite of Lee McQueen’s, Naomi has not modelled for the designer’s label since he passed in 2010. While this has surely been nothing more than an oversight, it does recall one of the duo’s more notorious encounters. In 1997, the supermodel was due to walk McQueen’s It’s A Jungle Out There show, but Naomi was running infamously late. Fed up of waiting, the designer gave Naomi’s clothes to another model and yelled “Naomi is cancelled!,” before allegedly telling her to “fuck off” when she did arrive.

The south London natives soon made up though and Naomi was never late again. Well, not for McQueen, anyway. “Why do I love Naomi?,” the designer said in 2007, “Because she’s common as muck! But seriously, we have a mutual respect for each other. Ever since I cancelled her five minutes before a show, she’s never messed me around.”

Today’s collection was inspired by the ever-changing, ever-turbulent sky which hangs over London, which is at once turbulent and mesmerising. “I love the idea of the McQueen woman being a storm chaser,” Burton said of the show, “Storm chasing is not only about the beauty of the views but also a sense of mystery and excitement – about embracing the fact that we can’t ever be sure of what might happen next. To give up control and be directly in touch with the unpredictable is to be part of nature, to see and feel it at its most intense – to be at one with a world that is bigger and more powerful than we are.”

That sense of poeticism was translated to cloth by way of cloudy prints, which had been shot from the rooftops of the Alexander McQueen studio, and emblazoned across punky taffeta dresses and parachute skirts. As ever, tailored jackets came in knife-cut proportions with military panels and pleated trains, while blouson sleeves were blown up on double-breasted trench coats and shirt dresses. The show ended with slashed tuxedo jackets and a bevy of glitzy evening wear – pitch black, skeletal corset dresses embellished with crystal raindrop embroidery in silk, mesh, and net.

Check out the gallery above for a closer look.