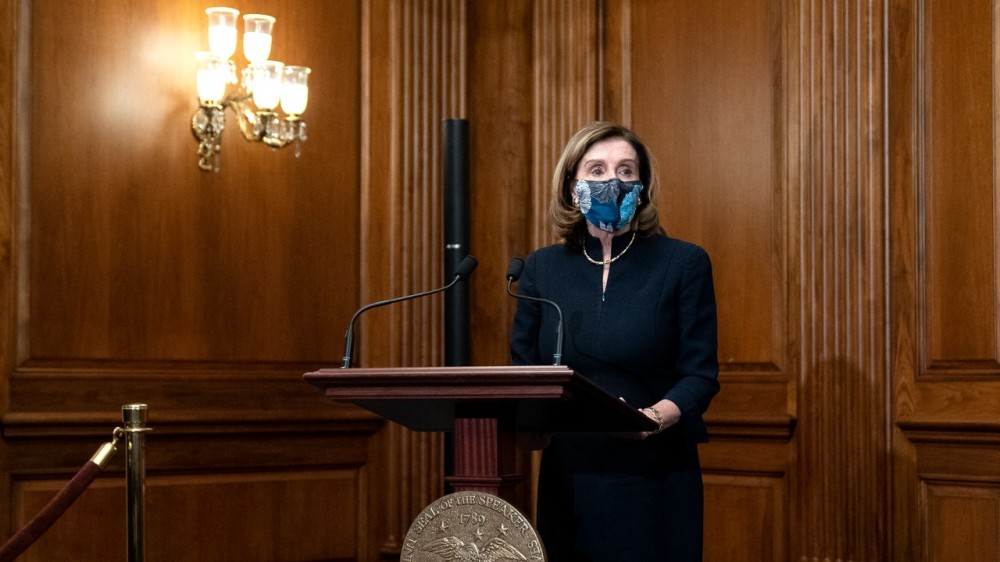 Does the impeachment of President Donald Trump give you a sense of déjà vu? Haven’t we done this already? And did anything really come from it the first time? It seems that Nancy Pelosi is feeling the same way. Yesterday, as President Trump received the distinction of becoming the only U.S. president to be impeached twice, House Speaker Nancy Pelosi re-wore the suit she chose for the first time the House of Representatives had impeachment proceedings. Always one to use a sartorial statement to double down on her political ones, Pelosi sent the message loud and clear: “Can you believe we’re doing this, again?”

The circumstances of the impeachments, of course, were different. The first time, in December 2019, Pelosi wore this suit to open the debate over the Trump-Ukraine scandal. Trump was impeached by the House and acquitted by the Senate. This time, the House voted 232–197 to charge Trump with “inciting violence against the government of the United States,” following the insurrection at the Capitol, which Trump cheered on Twitter.

For both occasions, Pelosi wore a black skirt suit, with three-quarter-length sleeves and a band collar, as well as a gold necklace. There was only one difference. In 2019, Pelosi wore a brooch of the Mace of the Republic, which is symbolic of the House of Representatives’ authority. In 2021, she swapped out the brooch for a mask to follow COVID-19 guidelines.

Pelosi knows full well how her clothing choices can make a statement. She wore a white pantsuit to announce that the House would be drafting articles of impeachment against Trump in 2019 and to attend the 2019 State of the Union address—a white pantsuit being a reference to the suffragettes. When she wore a fire engine red Max Mara coat to a meeting with Trump in 2018, many saw it as an expression of her strength. It was a power coat that could have been chosen by a costume designer on the set of a political thriller (or Scandal). Not all her fashion moments have been met with such glee: Over the summer, when Democrats wore Kente cloth to announce police-reform legislation following a spree of senseless killings of Black Americans, the gesture fell flat.

Pelosi is much more adept at dressing to reflect her role in this political theater. This latest outfit repeat is an aside to the audience that is watching her wage a familiar battle. But the mask in lieu of the mace shows that things have changed, drastically. In any case, with just six days before the inauguration, this will likely be the last time we see this particular suit.