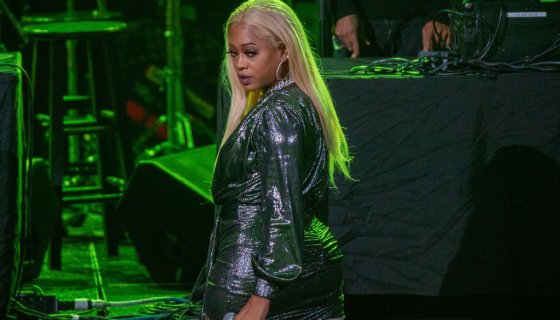 These celebrities, specifically Black ones, just can’t seem to stop shooting themselves in the foot.

Da Baddest Bitch, , is the latest celeb who is currently facing the wrath of Twitter. The Miami rapper got herself in some serious trouble while discussing the curfew being extended by Miami-Dade Mayor Carlos Gimenez from 9PM to 6AM. Trina would go on to say it should start at 6PM to keep the “animals off the streets” to keep them from “acting like they escaped from a zoo to keep the streets nice and clean.”

We are sure Trick Daddy was there listening in utter disgust while trying his best to save his T and T morning show cohost at the same time from making a complete ass out of herself, but she wouldn’t even let him get a word in during her ridiculous 2-minute rant. Trina would go on to complain about looting, the destruction of a friend’s store, which she admitted was insured, “Black on Black crime,” and more.

Trina doubled down on her stance, and Twitter is currently dragging her up and down timelines. The “Pull Over” rapper just gave her rival Khia even more ammo for her to use against her. You can peep the reactions to Trina’s ridiculousness in the gallery below.

How #trickdaddy was looking at #trina after she called black people animals when the interview was over pic.twitter.com/Qqq4CS5fDz

Trina on Love and Hip Hop every Monday night fighting but wanna call protestors animals…..she about to be neighbors with her fans when we done with her!

Me already laughing at Trina getting dragged by Khia later knowing she fucked up pic.twitter.com/eqFynPRbf2

Trina being a clown doesn’t surprise me, but looks like we’re getting her outta here today ! pic.twitter.com/qGTJakTP0R

Went to delete Trina outta my Apple Music and oopp she ain’t even in there pic.twitter.com/lPn6qRlqMH

It’s very easy to cancel a person you don’t listen to tbh….
Trina not even the baddest bitch anymore…her wig stay on her forehead pic.twitter.com/Y5ZUcSey11

Trina’s last album went double aluminum foil anyway so none of this even matters.

Trina really said in her interview “I know my rights. I have my license & registration. Black people need to be arrested & stop acting like animals in the streets”.. As if Black people aren’t the main ones supporting her & her music. These Black celebrities are a joke. Smh.

Trina shows that these celebrities are really mad at us cause of the pandemic…they aren’t able to ge tour money and other streams cause we can’t spend right now….

Wasn't it TRINA who got called the N word by some yt lady in a store a few months ago?! And we all rallied behind her. Racists don't give a damn whether you have money or fame, they're still going to be trash towards you because they see all Black people as less than.