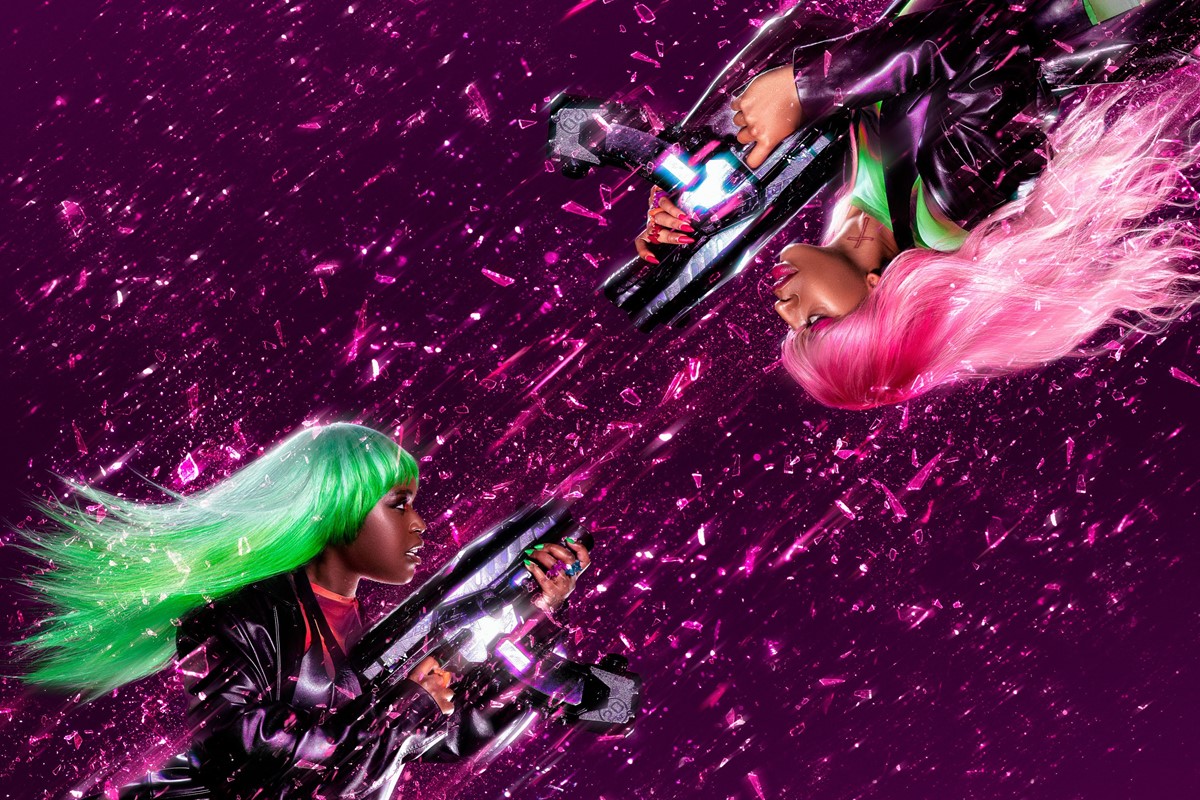 As the designer-musician duo release their club-ready track ‘Banana Clip’, we talk cringeworthy nights out and the songs that have soundtracked them

This is the Piczo chat room that AG Cook built and ever since she signed to the producer’s record label in 2020, Namasenda has tumbled through its mind-bending, pixelated hallways, bringing with her all the gaudy eurobeats and trance-adjacent sounds that she has stored on her beloved Motorola. On her latest release, “Banana Clip”, the squealing Swedish musician is joined by Mowalola Ogunlesi – a designer known as much for her penchant for Windows 95 memes, as she is for her clothing. Together, they’ve forged the sonic equivalent of smashing your head into a malfunctioning dial-up modem, only to find its fluorescent shards have exploded into your blood system, sending you on a disruptive and glitching “Roman Holiday”.

With artwork from Hannah Diamond, this is a PC Music family function, where auto-tuned earworm hooks call for repeated “shots after shots after shots,” leaving Mowalola and Namasenda increasingly blurry-eyed and fearful of what’s to come. Having “cropped out the fake hoes,” the track accelerates and the duo find themselves alone, in a thudding, bubble gum pop induced k-hole. “But I won’t stop, I do shots after shots, like a banana clip,” they chant. Although Mowalola won’t be making a return to the runway until 2022, today’s Namasenda offering follows a sweep of trap-infused features that the designer has hopped on – including collabs with Lancey Foux, and her debut venture “LiKe ME”, which dropped this March. Here, we catch up with the “Banana Clip” duo on so-called fake hoes, getting fucked up, and funeral songs.

Hello! So, how did you guys originally meet and why did you decide to collaborate on music?

Namasenda: We had been DMing a bit and then I asked Mowalola to be on the song because I thought it would really fit her energy. First time we met was at the cover shoot for the song.

Can you tell me a bit about how you worked together on the track – who took responsibility for what?

Namasenda: Well the song was basically already done. It was just missing something. I got a first draft back from Mowalola like one hour after I sent the track and I instantly loved it.

How are the song, the visuals, and the looks all connected? What’s the fantasy?

So you can do shots with anyone – who’s it going to be and what are you making them drink?

Namasenda: Buying rounds for Mowa and myself. I guess champagne? I don’t do shots.

Mowalola: Jesus. And we gonna be on tequila.

What’s the most cringeworthy thing you’ve done when you’re too far gone?

Namasenda: Please, I’m not telling you that…

Okay, then can you tell me which “fake hoes” have you had to crop out this year, then?

Namasenda: Too many to mention lol. We move!

Mowalola: Too many, A LOT of people are TAPPED.

“The first song that moved my spirit was ‘Believe’ by Cher. It was probably my first encounter with autotune. The video made me want to go clubbing” – Namasenda

Can you remember the first song that really moved your spirit?

Namasenda: “Believe” by Cher. It was probably my first encounter with autotune. The video made me want to go clubbing.

What’s the perfect song for coming out of lockdown and walking into the function?

Namasenda: “Banana Clip” followed by “I Gotta Feeling” by the Black Eyed Peas. The recipe for a fucked up night.

Sorry to be bleak but imagine you get hit by a bus today – what’s being played at your funeral?

Namasenda: “Pop That” by French Montana. Because why not?

And finally, what are your three desert island discs of all time?

Namasenda: “Strobe” by Deadmau5, “Swim Good” by Frank Ocean, and “Chrome Country” by Oneohtrix Point Never. That covers all the moods you could possibly be in.