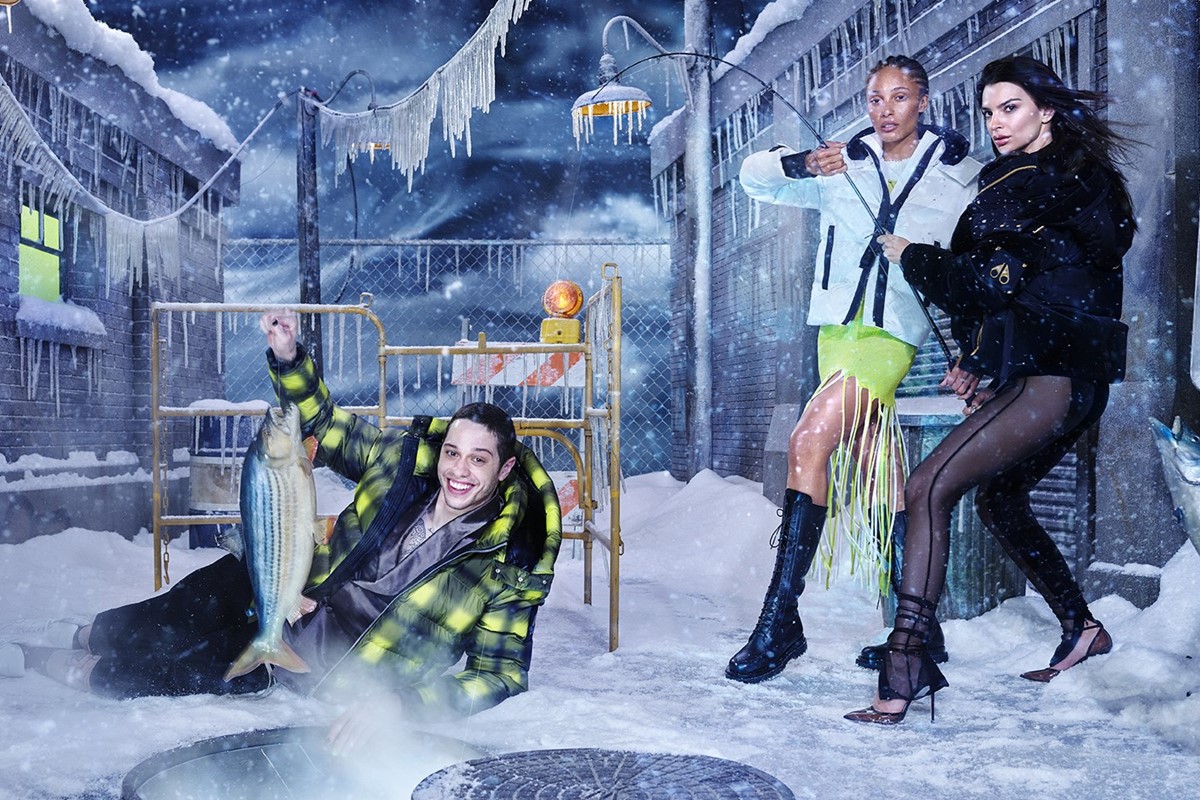 Sorry to be the bearer of bad news, but summer is officially over. We know, we know: did it even start? A very valid question, but we move.

Now, with the nights drawing in and the air growing more crisp, it’s time to switch out the warm nights out drinking rosé in the park with your mates for… well, warm nights in drinking rosé with your mates. Even more pressing than that, however, is one very important element of the changing of the seasons: namely, WTF are you going to wear during this, the winter of 2021?

Step in Moose Knuckles, which reckons it has the answer. The Canadian label has just dropped its AW21 collection, alongside a kitschy campaign that brings together three unlikely faces: comedian Pete Davidson, model, author, and actor Emily Ratajkowski, and model, activist, and Dazed fave Adwoa Aboah, who all find themselves immersed in a winter wonderland for the new season.

With Aboah trapped inside a snowglobe, Ratajkowski sitting pretty on an ice wave, and Davidson throwing his leg over a snow-cycle, the whole series is lensed by iconic photographer David LaChapelle. As bold, bright, and popping as ever, the campy series harks back to LaChapelle’s 90s oeuvre, when he captured everyone from Lil’ Kim and Britney Spears, to Tupac Shakur and the Spice Girls.

The collection itself is made up of innovative, technically-advanced, fashion-forward outerwear you’re guaranteed to be digging out year after year. As the saying most definitely goes, Moose Knuckles is for life, not just for Christmas.

The label’s signature Comptoir puffer, Oar River jacket, and Afton vest are debuted in a poppy palette of lavender, icy blue, and white, run through with flashes of bold yellow.

Focusing on its iconic Collection, for AW21 Moose Knuckles elevated its offering through technically advanced fabrications, as seen in its uber-cosy Feather Lite and Nyluxe down-filled styles. Wool, shearling, and leather bring warmth to a series of pieces from the White Collection, meanwhile, which digs back into Moose Knuckles’ heritage and its tundra-inspired roots.

Pieces are finished with utilitarian pockets, slick, unfussy fastenings, and understated detailing for a clean look – ideal for those looking to keep warm and stay cool in the city, without what Moose Knuckles calls the ‘carabiner look’ putting a dampener on things. Gorpcore? Get out of here.

Shop the collection here and check out the campaign above.