Moog’s classic synthesizer is now an ficial iPhone and iPad app with new features like polyphony, preset browser and looper.

Almost 50 years have passed since Moog released the first Minimoog Model D, but the iconic analog synth is still as coveted now as it was when it launched. Although Moog released an ficial reissue in 2016, most people’s experience the instrument will be one the many unficial clones and stware emulations on the market such as Arturia’s Mini V, NI’s Monark or the controversial Behringer D. As today however, musicians looking for the Model D sound that don’t have $3,499 to spend on an ficial reissue have been fered what could be the most accurate emulation the synth yet – Moog’s new $4.99 Model D app for iOS.

The app – which runs on both iPad and iPhone – is the latest in a growing line iOS apps from Moog, which started with the Filtatron filter app in 2010 and two years ago added an accurate recreation the Model 15 modular synth. Moog’s Model D for iOS also looks and sounds very faithful to the original and packs in a lot the features you’d expect from stware, such as a preset browser and AUv3 Audio Unit support for using it with the GarageBand app alongside features not found on the original, including arpeggiator, loop recorder and ping pong delay.

“There’s a reason why we waited so long to bring out this app,” Geert Bevin, iOS Product Manager and Stware Engineering Lead at Moog, tells FACT. “It is a very iconic synthesizer for us. It really was the first keyboard synthesizer that was portable, had that sound, made synthesis] accessible to everyone and we wanted to be sure that we would be able to completely nail it both in terms sounds and feel. I will not comment on the quality the others Model D VSTs], but what I can say is that we’ve worked very hard both on the visual interaction elements and also the sonic fidelity the app compared to the real deal.”

Visually at least, Moog’s stware team has managed to get the look and feel the app just right. Even on a small iPhone screen it’s easy to switch between views to tweak the oscillators without having to squint too much or play the keyboard and push the modulation wheel. The new effects modules are also integrated in a way that faithfully retains the original look, popping out from tabs at the top the screen. To my ears, the sound is also very good; it’s quite the same as an original hardware Model D, but it’s incredibly good for a $4.99 app. As Bevin explains, the team achieved this largely by trusting the ears Moog’s employees. 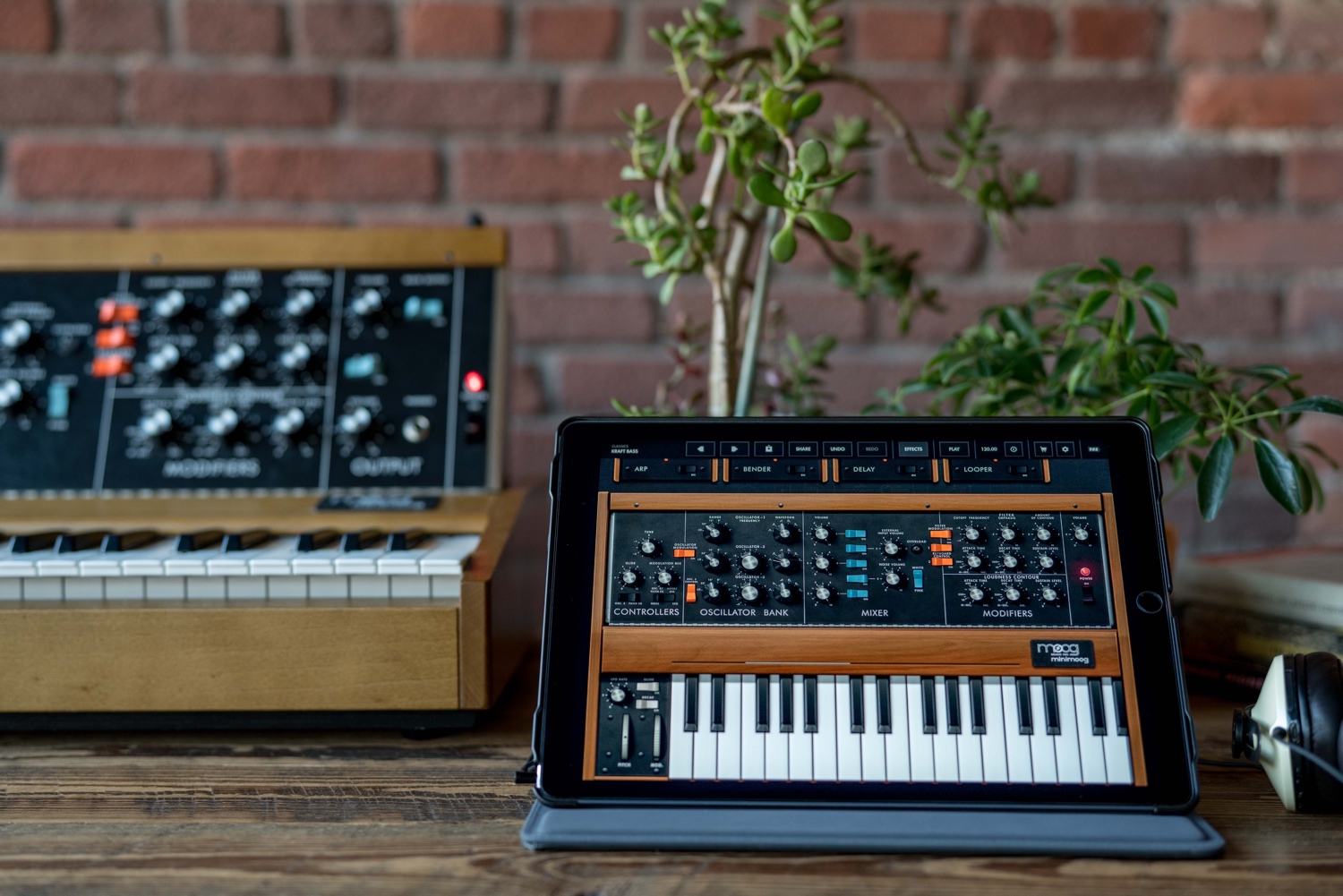 “We have the privilege having many experts and great ears for analog that are very well versed in the vocabulary analog synthesizers at Moog – particularly the Model D,” Bevin explains. “People that have heard all various incarnations that synthesizer, old and new, serviced and unserviced. So the first thing that we do is to get a sound that we think would theoretically be close and then do a whole lot listening.

“Initially we thought about doing the component modelling approach that other companies ten do, building stware synthesizers by trying to translate the vital electronic components into mathematical equations that theoretically could create the same behavior and same sounds. But we found that we got much better results by thinking it as a whole instrument – how everything actually interacts with each other, all the components, how they interact together to build this instrument. You don’t have just the oscillators and the mixer and the envelopes – all are designed to have a certain interaction upon each other and a certain feel, a certain distortion characteristic, a snappiness.”

Of course, this isn’t a like for like recreation the Model D – as well as an arpeggiator, looper and delay, the instrument has four-voice polyphony and a module called the Bender, which Bevin describes as giving synth patches “an almost orchestral sound”. The app also has different envelope modes; as well as a classic envelope mode that assists in making the snappy bass sounds the Minimoog is famous for, there’s a “clean” envelope mode that’s better for making smooth pads with the new polyphonic mode. Though not exactly true to the original, these additions were welcomed by the company. “Any idea anyone has is usually welcomed by everyone and we discuss if it’s appropriate for that product,” Bevin says the collaborative process at Moog.

While you’ll need a 64-bit device to make use the Model D app, it’s compatible with all iPhones from the 5S upwards and all iPads from the Air and Mini 2. It’s available from the App Store now for an introductory price $4.99.