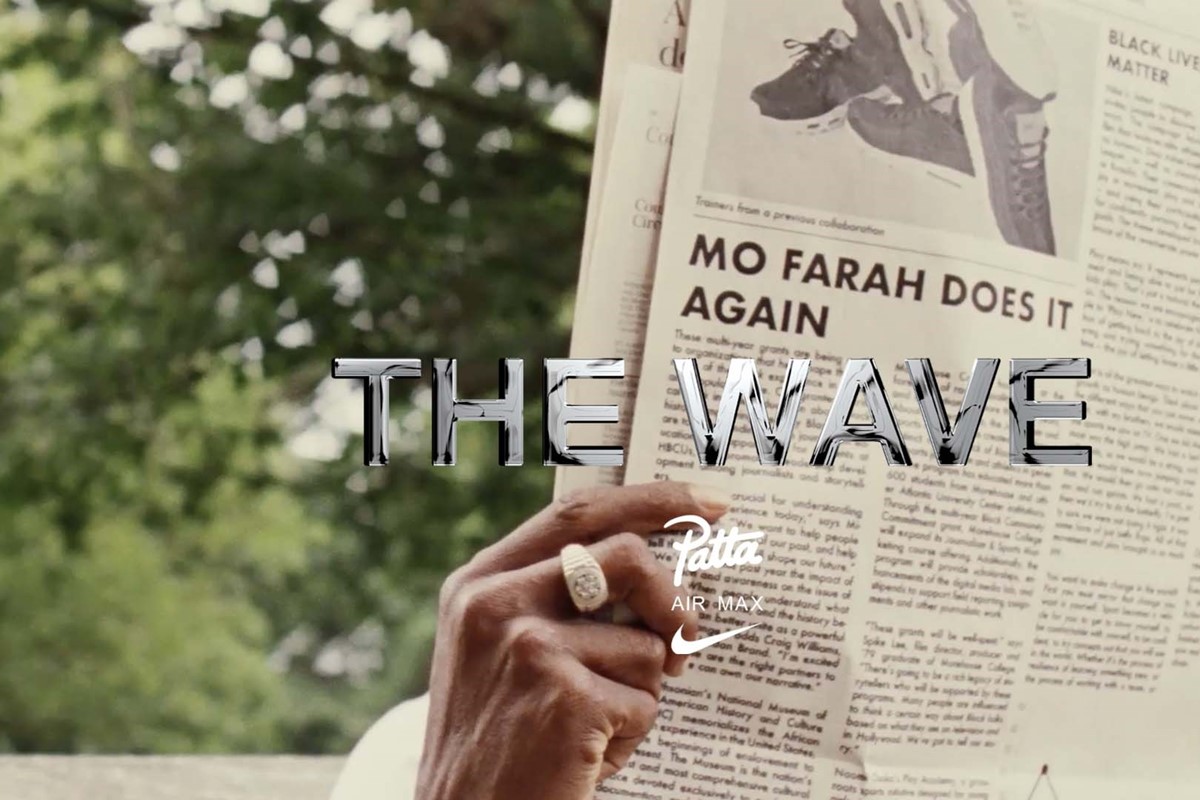 Celebrating the third chapter of Nike and Patta’s The Wave film series, the Olympic champion and streetwear visionary discuss mental health, how to pursue your ambitions, and the unifying goals of fashion and sport

“It’s only when I finally stepped onto the pitch, did I understand the importance of having teammates.” The introductory line of the third chapter of The Wave, a film series from Nike and Patta shot by Mahaneela and Steve McQueen, cements the notion of community. Behind every great person or project is a world of helping hands: the family, friends, and creatives that fan the flames of passion.

Starring Mo Farah, Britain’s most successful track athlete, this chapter explores the necessity of having teammates who encourage and uplift you, whether you win or lose, along your journey to becoming better. In the film, it’s Mo’s helping hand that pushes our hero, Abdul, back onto his feet to run alongside his peers.

These are ideas that Mo and Edson Sabajo, co-founder of Patta, know well. For Mo, determination, perseverance, and an unbridled sense of self-belief have upheld and carried him to multiple Olympic gold medals. While Patta’s seismic growth within streetwear, which has taken the brand to partner with Nike for over 15 years, has demanded strong, trustworthy relationships.

When the creative fields of artistry, sports, streetwear, and brands collide, it ignites the chance for two great minds to collaborate. In this interview, Mo and Edson discuss how a project like this can create space for such link-ups, Black culture, and the importance of focusing on mental health. With that in mind, the interview begins with the pair’s first chance to speak on working together.

Mo Farah, and Edson Sabajo of Patta, how did you come to work on this film together?

Edson Sabajo: You’re the sir, so please, go ahead!

Mo Farah: I’m a Nike ambassador, and I was like, this (film) really represents London. The reality is, if we don’t have the team, the support, the system, the community – then we wouldn’t be in the position in which we are in now.

It is very much London, a grand project with many moving parts. What excites you about bringing together talent from fashion, music, sport, and more?

ES: It’s not only about the elite artists or athletes, but also the normal guys connecting with the top artists and athletes. At the end of the day, we are striving to be the best in what we do, in any field. I am a big fan of Mo’s – you see him running and having fun with it. I’ve seen so many of his interviews, and the first thing he’s said is – if he doesn’t have fun with it, it’s not for him. Training, going to high altitudes, doing stuff like that can be boring for some people. I see him (talking about his relationship with his) twin brother. That is a very key thing to have: community. Community is not only about people outside your own playing field. It starts with family, the people around you, with friends.

I love the interconnectivity of all of this, how it links back to the wider community and culture. What do you both admire about each other’s craft?

MF: I love sneakers, I love shoes. To be a part of this, with Patta, it’s nice. As a kid, you always wanted to be involved high up in the culture, with these great artists. In the streets, growing up in London, inspired by garage, grime, all the MCs like Skepta and being able to bring that together as one. To show that detail in that trainer, too, there’s a lot more to it.

Patta has collaborated with Nike for a long time – when you’re working on producing running shoes, for example, how important is it for you to project culture and where you come from?

ES: The key essence is: the sky’s the limit. With Mo, he doesn’t limit himself to only running. He had his own foundation, trying to help his people. Patta started as a shoe store, but then we realised that if we put our logo on a t-shirt, and people liked it, it was like, you know what? Let’s start our own clothing company. We started off as a shoe business, now we have a running team, the Patta Soundsystem, we just started with the Patta Foundation, I just also started the Patta Academy. Man, we did stuff with museums, now we’re talking with Dazed. We can show those kids, and people that are willing to listen, if I can do it…

ES: It is all about dedication, hard workmanship, sacrifices, and of course – leadership.

Ed, you were working in a record shop with Gee (Schmidt) before Patta came to fruition. How do you go about establishing or founding a community?

ES: I met Gee in the late 90s – he used to come up from the South of Holland to Amsterdam to buy records, he did his whole round of buying records, and ended up at Fat Beats. One day we started talking, we had the same interests. It was nice, we had some laughs. Then I asked him, ‘Why do you always go back to the South? Why don’t you stay for the weekend, you can sleep on my couch?’ From then on, we became friends. Still up to today, we are best friends. That’s a very good thing – with friends you can talk – not only about the good things, but the bad. That’s how you actually build community. Little bits and pieces that bring you together.

“It’s about never setting yourself a limit – acknowledging where you’re coming from, being able to have that vision, and working together” – Mo Farah

How important is it for you to establish links within these communities across different pockets, like London and Amsterdam?

MF: I have been lucky to travel the world. It’s full of diversity. It’s about never setting yourself a limit – acknowledging where you’re coming from, being able to have that vision, and working together. I am lucky enough to have sports. From a young age, it didn’t matter if I was Black or white, what you put in is what you get out of it. When I see London, Amsterdam, other cities – that’s what it’s all about.

ES: Totally agree with Mo. If you’re good at one thing specifically, let’s say the 5000 metres, you get into the same rhythm, you don’t motivate yourself. Then you’ll be like, ‘Alright, let me see if I can do the same with a half marathon.’ Always set yourself new targets. People come up to us, like, ‘You’re legends’. I am not a legend, I am just a guy who does stuff that you can too. You want to come with us? Come on this wave and ride this out. That’s what it’s all about, at the end of the day.

Mo, how has sport played a part in affecting your mental health on and off the track?

MF: Sports have played a big part in my life. For me to be able to do what I enjoy the most, you have to enjoy what you do, you have to believe in what you do. People think, ‘You run 120 miles week in week out, are you crazy?’ But you know what, that’s what makes me happy. As long as you’re passionate about it and enjoying it, there is no limit. Keep on smiling, keep going. There’s things that you can control and some you can’t, don’t let it affect you.

ES: As for mental health, in Caribbean culture, African culture, Black people don’t talk about it. A lot don’t listen, especially the parents. Many still feel it’s a disease, as if it’s voodoo or this and that, but now, we are showing them we need to talk more. Not talk about the weather, but how we feel inside. One thing that really helps me to overcome situations, is talking with my friends and family.

MF: 100 per cent. We’ve all got to find that one thing that gives you relief. It was different the way we were brought up – going back generations, our parents, their parents, they didn’t talk about it, didn’t see it as an issue, but mental health definitely is an issue. It does exist. Seeing it, talking about it, it’s okay.

Creating something from nothing can be quite daunting. When did you realise what you do could have an impact on culture and change the world?

ES: Creating something from nothing was already there, in our Caribbean blood, our African blood. When I realised that I changed the world? I don’t know if I have changed it yet – but I am trying to help and do my best in my ability and capability.

If I could just interject, you have.

ES: If you say so, thank you. But not yet. We’re just getting started, I think. Patta is only 17 years old. After 35 years, after my kids or somebody from the academy takes control of Patta, maybe. I always say to the team, it’s only the start. We want to grow bigger and better. I always say, you’re only as good as your last performance, we have a lot to do.