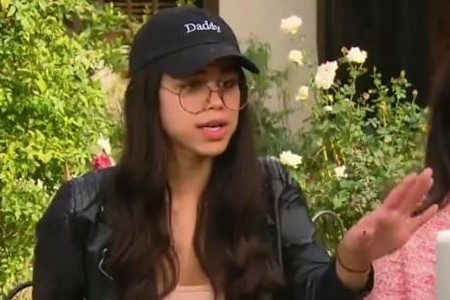 Unless you took up residence under a rock this weekend – and at this point, who could blame you if you did – you might have found yourself scrolling through the discourse surrounding Miya Ponsetto’s chaotic interview with Gayle King on American news show CBS This Morning.

Having first landed in the public eye on December 26 thanks to a video that quickly went viral, Ponsetto was seen accusing Black teenager Keyon Harrold Jr. of stealing her phone in the lobby of New York’s Arlo Hotel. Growing increasingly agitated as Harrold Jr. denies taking it, Ponsetto is heard pleading with the hotel manager to help her, before she physically attacks Harrold Jr. from behind in a bid to stop him walking away. No surprises that the teen didn’t have the phone, with The New York Times reporting that an Uber driver found it in his car shortly after the altercation and returned it to the hotel reception.

Invited to appear on CBS This Morning, Ponsetto – or ‘SoHo Karen’ as she’s been dubbed across social media – was afforded the chance to reflect on her actions and apologise for her behaviour, which is truly a privilege in itself. What happened next, however, was a car crash of an interview in which Ponsetto painted herself as a ‘super sweet’ girl while basically coming off as literally anything but.

Flanked by her lawyer, Sharen Ghatan, Ponsetto vehemently denied her overreaction in the Arlo’s lobby was rooted in racism, dismissed the idea that she’d done anything wrong, and failed to hold herself accountable for her actions. A disingenuous, roundabout apology saw her claiming she was “sorry I made the family go through, like, all of that stress. But at the same time, it wasn’t just them going through that.” She also claimed she “couldn’t be racist” as she is Puerto Rican.

Surprisingly, Ponsetto’s abhorrent attitude wasn’t the most disrespectful part of the interview: instead, it was her choice of clothing. Made up of a black leather jacket layered over a peachy-coloured cropped top, the pièce de résistance came in the form of a faded black dad cap emblazoned with the word “Daddy”. If the whole thing screams Urban Outfitters to you, then you’d be correct: until recently, the hat was being sold on the store’s website for $16, until it was pulled last weekend following Ponsetto’s CBS appearance.

Despite Ghatan urging her to opt for smart clothing, Ponsetto’s choice of ensemble demonstrated her lack of accountability and further reinforced the dismissive, defiant attitude she displayed throughout the interview. The look was a direct antithesis of the typical ‘apology outfit’ worn in public appearances – usually demure and understated in style, think Jordyn Woods’ black roll-neck sweater, as worn on an episode of Red Table Talk in which she discussed her kiss with Khloe Kardashian’s then-boyfriend Tristan Thompson, and you’ve pretty much got the idea. Instead, Ponsetto looked like an off-duty celeb appearing via videolink on a talk show – which perhaps she now perversely thinks she is, given her current level of infamy.

With the clothes we choose to wear often an outward demonstration of our personality and values, they also have the ability of conveying powerful messages. In Ponsetto’s case, it was hard to decipher that message as being anything other than ‘IDGAF’. The decision to wear the “Daddy” hat was a symbol of Ponsetto’s ignorance and privilege, and served as a reminder to those watching that, were a Black person to have done the things she did, it’s highly unlikely they’d be afforded an interview on national television and the opportunity to redeem themselves – and if they were, there would be strict codes of conduct to adhere to.

With Ponsetto having since been arrested on charges of attempted robbery, assault, and endangering the life of a child, Harrold Jr.’s father perhaps put it best when also appearing on CBS earlier this week. “If I had done that, what Miya Ponsetto had done to my son, I’d be in jail now,” he explained. “As a Black man, every day I walk outside, I have to play the perfect game, almost like throwing a no-hitter, just to be believed.”

Ponsetto is due to appear in criminal court in New York on March 29.