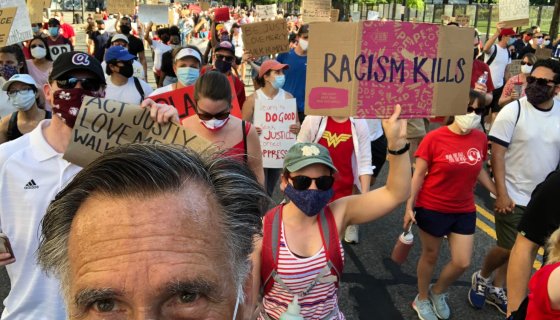 First things first, despite some L’s, Mitt Romney is still a savvy politician. But it was nevertheless surprising to many that the current Senator from Utah was out marching with Black Lives Matters protesters yesterday (June 8) in Washington.

Of course, Romney made sure to document the moment social media, actually tweeting “Black Lives Matter” with a pair of pics from the protest—he reportedly marched with evangelical Christians along Pennsylvania Avenue.

“Peaceful protests underscore the urgency of addressing injustices,” Romney told the Washington Post. “But violence drowns the message of the protesters and mocks the principles of justice.”

He was also heard saying, ““We need to stand up and say that Black Lives Matter,” during the march.

.@MittRomney is marching with a group of nearly 1,000 Christians to the White House. Here he is on video saying why he’s walking: “… to make sure that people understand that Black Lives Matter” https://t.co/KCxJNchCMs pic.twitter.com/Za0Am2WL8g

To reiterate that he’s always been about that protest life, Romney shared a pic of his father protesting for Civil Rights in Detroit in the 1960s.

This is my father, George Romney, participating in a Civil Rights march in the Detroit suburbs during the late 1960s—“Force alone will not eliminate riots,” he said. “We must eliminate the problems from which they stem.” pic.twitter.com/SzrcAyfPD8

Right on cue, the man squatting in the White House took to Twitter to try to slander Romney. He only did a job of demonstrating more of his petty. We still must remind y’all that before.

Tremendous sincerity, what a guy. Hard to believe, with this kind of political talent, his numbers would “tank” so badly in Utah! https://t.co/KqHsHmSRKo

While Romney received some careful praise for stating the obvious, many people aren’t taking their eye off the jig. Peep some of the varied reactions below.

I give @MittRomney a lot of credit and respect for standing up when practically no one else in his party has. Hopefully others will stand up with him. #BlackLivesMatter https://t.co/1AnD0jEOYz

Are people not realizing how much credit Mitt Romney is currently receiving for simply saying that the lives of black people matter? No significant policy proposals or meaningful examination of the GOP’s role in America arriving at this moment. Just “matter.” https://t.co/RY2yloovDk

It says something when Mitt Romney makes it to a #BlackLivesMatter protest before Bernie Sanders. 👀

Mitt Romney is no revolutionary. His marching with Black Lives Matter just shows how mainstream and international this movement has become. So if anything, that should show how the tides have turned.

The fact this is so notable says as much about the GOP in 2020 as it does about @MittRomney. “Republican marches for civil rights” shouldn’t have to be such a big news story. https://t.co/tsW73k8BRZ

Only Donald Trump would mock someone for being a good person.

Thank you @MittRomney for being a good person!

Trump's numbers in Utah keep falling. In January, Trump was up over Joe Biden by 18 points. Today he's only up by 3 points (which fall under the margin of error). In other words, Mitt Romney is "dominating" Trump in Utah.

So why do you support Trump? Why did you not denounce his attack on peaceful protests? Why aren't you out there marching like @MittRomney ? These tweets are insulting if your votes, behavior and political support do not follow.

The fact this is so notable says as much about the GOP in 2020 as it does about @MittRomney. “Republican marches for civil rights” shouldn’t have to be such a big news story. https://t.co/tsW73k8BRZ

A phrase no other Republican
has uttered!

I’ll trust Mitt Romney when he shows up to my house with a bottle of Hennessy, a bag of shrooms and a binder full of apologies

So will you support a bill to end qualified immunity @MittRomney?

Trump's failure to yet tweet about @MittRomney marching today means Fox News hasn't covered it and everyone in bunker too afraid to tel him. Stay tuned!