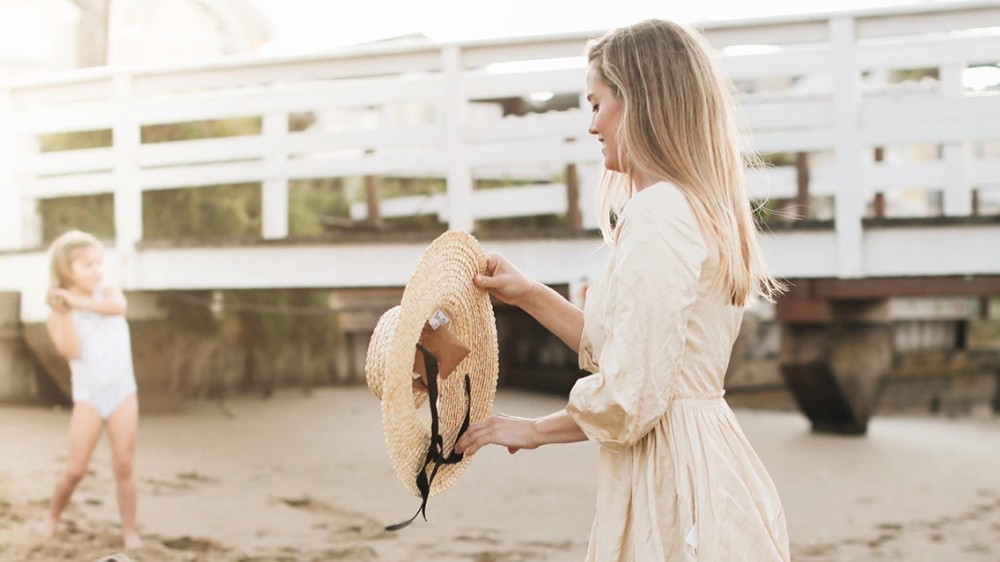 “When Morgan [Smith] of Minnow Swim and I became mothers around the same time, we planted the seed of one day doing a children’s collection together,” designer Laura Vassar of Brock Collection remembers. “Being working moms and living in California, we were inspired to take the simplistic, beautiful elements of Minnow and add some Brock whimsy to [create] this darling children’s collection.”

Smith and Vassar grew up on the west coast in Newport Beach, where they were childhood friends. “We met at age twelve as lifeguards and attended junior high and high school together,” Smith explains. “We spent summers as teenagers laying out at 34th Street and riding bikes along the boardwalk.” After college, they both went to New York City to pursue careers in fashion—marketing for Smith and design for Vassar—and years later, they became moms right around the same time, welcoming their boys Charlie and Theo back in California just months apart.

Since the launch of Minnow Swim—a contemporary children's swimwear label that's all about clean lines and simple details—back in 2016, Vassar has always been an eager supporter of Smith’s work. “Laura was one of the very first people to see samples of Minnow before I even started the brand,” Smith recalls. “Her stamp of approval meant so much to me as I greatly admired her strong vision for Brock and impeccable eye.”

Smith and Vassar always wanted to work together, so when the Minnow team received art files for suit patterns and prints from Brock this past fall, they leapt into production in order to ensure the collection was ready in time for spring. “We found some rare and beautiful prints from French and Italian mills that we work with, and designed a fanciful, fairytale-like children’s swim collection in faded florals,” Vassar explains. “We are so thrilled with the end result!” And while the prints are from France and Italy, all of the production is done here in the United States. “Just 20 minutes away from where Laura and I grew up!” Smith adds, bringing everything full circle.

The assortment is thoughtful and considered with just four boys’ pieces and five girls’ in two signature Brock prints, along with two women’s pareos. Prices range between $55 – $148. The standout suit for Smith is undoubtedly the girls Blue Fleur Ruffle One Piece. “It’s timeless and sweet without being too precious,” Smith says. “Which feels very Brock to me! ”