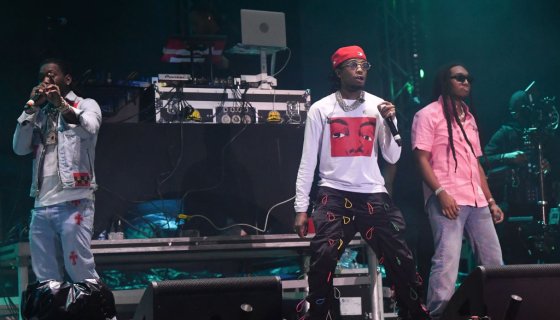 While the majority of the country is still practicing social distancing on Cinco De Mayo and the beloved Taco Tuesday, it’s not stopping from dropping banger that makes you feel festive–even inside.

Late night on Monday (May 5), released their new single, “Taco Tuesday”, featuring a sample from none other than Taco Tuesday enthusiast . Last week a snippet of the new single was previewed by Quavo in a video where he and girlfriend  were in the kitchen, cooking up some tacos, after the song leaked online.

“Taco Tuesday” comes one month after announced that the trio was back in the studio working on their highly anticipated album, Culture III, but due to COVID-19, those plans were shifted into the release of the Quarantine Mixtape. Although it’s no official word on whether “Taco Tuesday” will appear on the mixtape, Quavo did reveal during his announcement on Twitter that the album would definitely be released post-COVID-19.

“Quarantine Mixtape?? Jus To Keep Y’all Straight,” Quavo wrote. “Then Culture 3. When All This Is Over! Y’all F*ck Wit That? Cuz We Ready To Drop. ASAP Original Migo Mixtape!!! Day 1 Sh*t”

Quarantine Mixtape?? Jus To Keep Y’all Straight. Then Culture 3. When All This Is Over! Y’all Fuck Wit That? Cuz We Ready To Drop. ASAP
Original Migo Mixtape!!! Day 1 Shit

During an interview with Billboard in late March, Quavo explained why they were postponing the release noting that he wanted the group to have a proper rollout for the project.

“Of course, the business has slowed down because we perform in front of masses of people,” Quavo said. “Dropping music and all that, it’s at a standstill right now with us because we need to go out there and touch the people to push our albums to make our music work.”

Check out “Taco Tuesday” below.