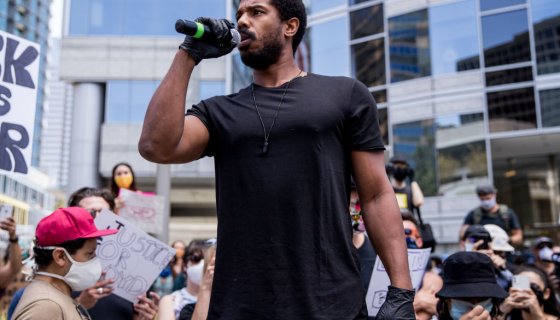 With the continuing into their second week and garnering more support with every passing day, more and more celebrities have taken to the streets and social media to show their alignment with the movement.

Now has become the latest big-name Hollywood actor to use his platform to not only address the racist American culture people of color have to endure across the board, but also deliver a powerful speech in which he demands Hollywood get with the times and treat Black people equally in the industry.

Speaking to protestors in Los Angeles, California, the Creed star called on Hollywood studios to “commit to Black hiring” and even suggested that he’d reconsider his relationships with his sponsors if he learns that they “have any financial ties to police.”

This man isn’t playing. Maybe having him sit on that Wakanda throne instead of T’Challa wouldn’t have been so bad. Just sayin.’

He also committed to hiring private security firms instead of employing police from here on out. Po-9 ain’t gonna like that, b.